Smithsonian has just announced the 70 finalists for their 13th annual photo contest and voting is now open from now until March 21, 2016 for the Readers’ Choice Winner. Smithsonian.com’s 13th Annual Photo Contest ran from March 31, 2015 December 1, 2015 and received over 46,000 submissions from photographers in 168 countries and territories.

The Grand Prize, Readers’ Choice, and seven category winners (a total of nine awards) will be announced on Tuesday, March 22 and the 14th Annual Photo Contest will open for submissions that same day.

These two sub-adult tiger cubs, aged around 21 months, are engaged in a mock fight, a part of their learning process to acquire stalking and self-defense skills. Taking advantage of the fact that a sibling’s attention was diverted for a moment, the other charged her and what was witnessed was a sheer moment of awe when these beautiful and magnificent animals were standing upright just for a moment and you could see the rippling muscles and the power that these biggest cats hold. No more than a few seconds and it was all over where one of the siblings is seen lying down in a submissive position – a pose that tells the opponent that the rival has surrendered. Definitely a rare moment to be captured in the wild, these playful lessons that the siblings engage in are a crucial learning lesson for their adult life.

This image was created underneath the Mendenhall Glacier in Juneau, Alaska. The beauty of these glaciers astounds me to this day, but as we all know, they are disappearing worldwide. The image has the ability to educate the world and give hope. Hope that with the right mindset, we can preserve the beauty that surrounds us by living sustainably. This will ensure that future generations can enjoy the same beautiful images we capture through such photographs.

The inspiration for this photo came from seeing this glacier everyday in my backyard. I attended university in Juneau, Alaska and from the campus you can catch glimpses of the glacier on a clear day. I felt personally connected to this body of ice, and as it began to recede before my very eyes, I knew I needed to preserved the beauty of it through images. I began to photograph it in late 2011 and am still photographing it today. This is because although I know we in Juneau can see the effects of climate change and know the importance in traveling and living sustainably, I feel it is important to document this change so that the world may understand the beauty we are losing everyday.

I believe the ultimate form of sustainable travel is to experience the wilderness through canoeing or hiking. A respectful traveler leaves no trace of passage, enjoys the symphony of nature’s sounds in respectful quiet and appreciates the clean water and air that invigorate the body. Wilderness travel challenges the body and mind, builds personal character and fortitude, develops respect and appreciation for the natural world and strengthens the bonds of companionship.

In 2014, I completed a 221-day solo canoe trip in the Boundary Waters Canoe Area Wilderness and Quetico Provincial Park. I had been dreaming of such an adventure for many years, dreams inspired by memories of incredible scenes such as this. This photograph captures a moment of generous reward for having overcome many challenges along my journey. For three hours, the undulating curtain of green and red spikes created an awesome, mesmerizing spectacle best viewed in silence and reverence. The image inspires new adventures and a strong desire to protect wilderness areas everywhere.

Mine was not a trip of conquest, but rather a trip to experience the wilderness in all of its moods, challenges, beauty, simplicity and peacefulness. I documented all facets of this journey to help educate and inspire others to learn about wilderness ecosystems and develop a passion to protect all wild places. After having the opportunity to create this unique “Canoeing Under the Aurora” photograph on day 191, I felt it best represented my seven-month adventure.

4. A Little Monkey on the Cliff

A cold front hit the Nagano prefecture. I saw a little monkey enduring the cold in Jigokudani Monkey Park. This little monkey is really cute.

“The Washing Machine” was taken from my quadcopter over the start of the La Jolla Rough Water Swim, otherwise known as the Gatorman. I was there taking photos of my fiancé swimming in the event. It is one of the top ocean races in the United States. Swimmers line up in the cove shoulder to shoulder. At the start of the horn they all jump into the water at the same time, swimming as fast as they can to distance themselves rom the group. “The washing machine” is a term used by open water swimmers, referring to all the whitewater being turned up. The race is three miles.

The fishermen are tossing the net under the sunset.

This is an altered image, composed from portraits of two mandrills living at the Madrid Zoo Aquarium. I took the photos in February 2015. The light, the distance and general conditions were extremely complicated. That’s why I had to apply diverse exposure and contrast corrections, among others. The black background that recreates an image in the studio was done in post-processing, isolating the animals from the rest of the environment to focus on the subject. 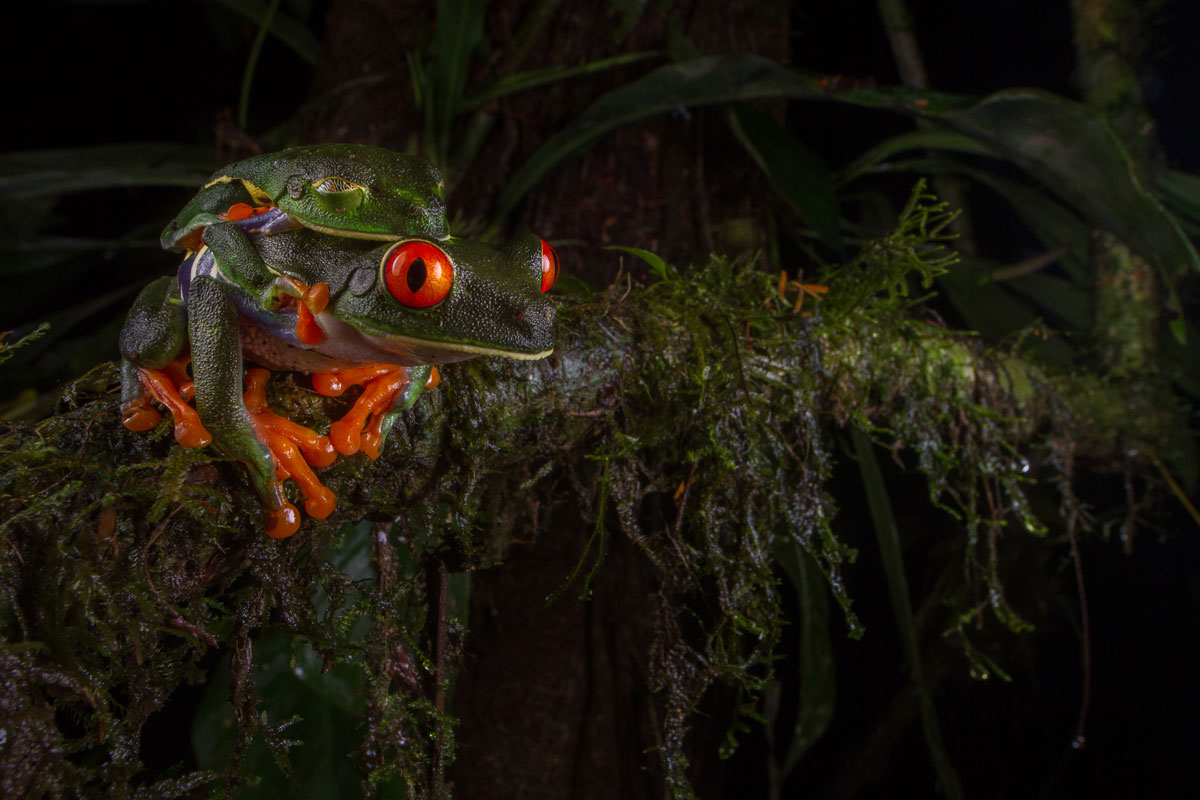 A male red-eyed tree frog (Agalychnis callidryas) takes a cheeky nap atop a female while he waits for her to lay eggs. This position is called “amplexus,” and it puts the male in position to externally fertilize the female’s eggs as soon as she has laid them.

The photo was taken at Wakodahatchee Wetlands in Delray Beach, Florida. This is a manmade wetlands with a boardwalk, created by the local water company to act as a water filter. I typically spend 1-2 hours there, 5-6 days per week just enjoying nature and taking photographs. This has been a terrific learning experience for me as I have become aware of the many species of birds and wildlife that live there and their habits. This photo was taken shortly after the peak breeding season.

This photo is taken on April 5, 2015 at Sertar. I decided to make a trip there after seeing an Internet photo of the little huts. The Larung Gar Buddhist Academy in Sêrtar, China, is the biggest Buddhist settlement in the world and home to as many as 40,000 monks and nuns. Each of them lives in a little hut with very limited and basic facilities. Once I arrived in Sertar, I immediately felt a part of it. Although it is packed and freezing cold, it made me feel peace and quiet. I took this photo when the sun came out after an overnight snow. The place became peaceful and vivid at that moment.

After evening rain and a foggy morning, the sun rose over the autumn plain, and three black cows appeared through the mist.

My garden has many flowers, and everyday red squirrels come to visit. I am almost always ready to take some shots of these wonderful animals.

I took this photo of fireflies (lightning bugs) in almost complete darkness using the latest low light camera technology. I was completely surrounded by the fireflies and witnessed one of the most amazing and magical natural phenomena: fireflies that synchronize.

The Indian leopard, particularly in the southern region of India, is weary of the high concentration of tigers, wild dogs and sloth bears and therefore spends most of its time on high tree branches. I was at a safari in India’s Kabini Forest Reserve, a park that forms the Nagarhole National Park, which is one of the biggest environmentally pristine complexes in India and hosts the highest number of tigers in the world. I was on my first safari in the park, and I was taking in the beauty of the forest and observing the charismatic movements of the Kabini’s wild inhabitants. The southwest monsoon had turned the landscape into a deep green shade, and I felt as though each petal of a tree had been meticulously painted. As my thoughts grew deeper, suddenly our driver stopped and pointed out to a leopard perched up a tree. This was the first time seeing a leopard. I was awestruck for a few seconds and then I quickly got the camera, adjusted the settings and started clicking.

Through my photographs and personal sites, I share information regarding the wildlife I photograph and the importance of conserving their habitats. This summer I started working on a personal project which focuses on telling the stories of those who work in the conservation field: forest guards, elephant mahouts, villagers in and around the reserves. Many, when they think about conservation, think of big organizations and government, which is completely fine, but they forget those who risk their lives tracking tigers on foot day in, day out, away from families and the comfort of the home for months. I hope to release this project this coming summer, as a video and blog series.

Sustainable travel is something we all should strive to consider and eventually adopt. From using less plastic on your travels to picking up just a little bit a trash along your way, there are so many ways we can help. Getting others involved doubles your impact and benefits our fragile world. As often as I can, I go out and explore the world’s oceans with my cameras. I also strive to document the work of others protecting and conserving our environment, specifically in the world of sea turtle conservation. During nesting season, I go out with our amazing biologists, scientists and volunteers who help to protect and document sea turtle habitats in South Florida. These turtles face a huge battle of survival on their upcoming “travels” and every person I can impact with their picture is a win!

Researchers, biologists and many volunteers across the east and west coasts of Florida and all around the world perform beach monitoring during sea turtle nesting season early in the morning. They mark the nests once the turtle has laid them during the night, identifying the species by the tracks. Once the researchers, biologists and volunteers see that a nest has hatched, they mark the nest. Three days later, the nest is dug up to record a number of important data points, depending on the researcher or organization.

Every once in a while there are a hatchlings at the bottom of the nest that never make it to the surface to emerge. These hatchlings are released early in the morning at sunrise or before (preferably) during the digs. Many times the hatchlings are too weak to be released, or it is too light out, and so they are brought to a sea turtle rehabilitation center or released later on by the researcher during the night.

While I was documenting the work of South Florida researchers, a handful of hatchling leatherback sea turtles were given a second chance at life. The way these two ended up walking out alongside each other was an amazing moment that I was able to witness and share.