Artist Makes Graffiti Legible By Rewriting It In Plain Text

Mathieu Tremblin is an artist currently living and working in Strasbourg, France. Born in Le Mans in 1980, Tremblin graduated with a degree in fine arts and is a founding member of the duo Les Frères Ripoulain (2006) and BIP (Bureau d’investigation photographique) collective (2005-2015).

In an ongoing series entitled, Tag Clouds, Tremblin makes graffiti tags legible by rewriting them in plain text, in a style similar to popular tag clouds found on the Internet (even the Sifter has one in the sidebar).

In a 2013 interview with The Atlantic’s CityLab, Tremblin states:

I consider “Tag Clouds” as a traditional graffiti fresco work. I come from a local graffiti scene and painting over a wall covered by tags to make something more complex, letters or characters whatever, is what graffiti writers do. But what’s interesting is that the final mural deals with the writer’s ego- their name. Having that direct communication, being known by anybody, is what writers are searching for. “Tag Clouds” removes all alterity or identity and makes it properly decorative and appreciable to any passerby, which is also the purpose of a graffiti fresco, showing technical skills for decoration.

This work sounds like a kind of oxymoron, you could understand it as a way to make a dirty signature proper as institutionalized visual communication, sterilizing wild graffiti writing by removing all traces of alterity and at the same time giving the opportunity to anybody to be able to read graffiti script and get in touch with it.

So agreeing with or being against the piece as a graffiti writer is a complex thing to decide because I’m half paying tribute to and half normalizing the local graffiti scene. I just translate writers names at the same scale and they usually continue to play with the blank spaces, adding their signature between regular typography I painted with stencil. In fact, the project is giving focus to some walls that writers weren’t paying attention to anymore because they were filled with tags. Mostly though, it generates new graffiti challenges instead of killing the energy behind it. [source]

[via Design You Trust] 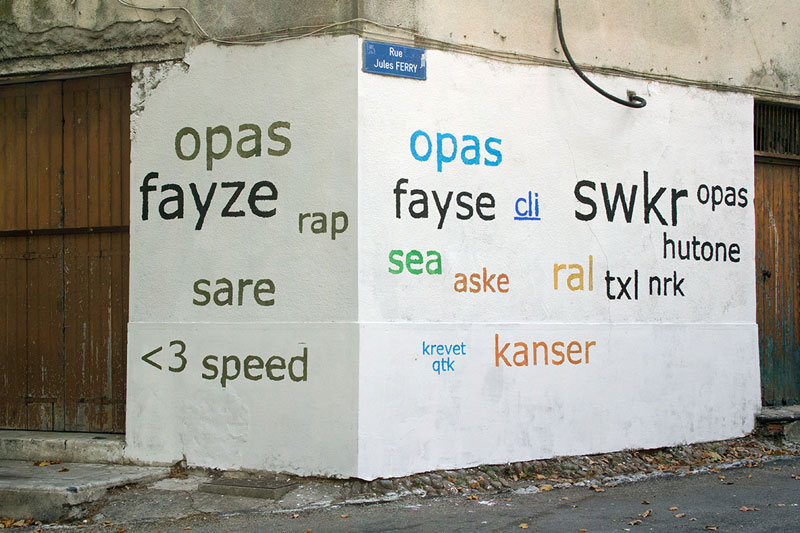