Even before his unfortunate passing last week, Leonard Nimoy has been receiving tributes by Canadian Trekkies in the form of currency doodles. Years ago someone noticed that with a few strokes of the pen, Sir Wilfrid Laurier—7th Prime Minister of Canada and face of the $5 bill—looked remarkably similar to Spock.

Ever since, people have shared images online of $5 bills they have found and received over the years that bear the Spock tribute; and since Nimoy’s passing, the amount of ‘Spocks’ in circulation has dramatically increased.

Contrary to the United States, it is not illegal to deface or mutilate Canadian bank notes, although there are laws that prohibit reproducing both sides of a bill electronically. [source]
[Sources: CBC News, IO9, Huffington Post, AV Club] 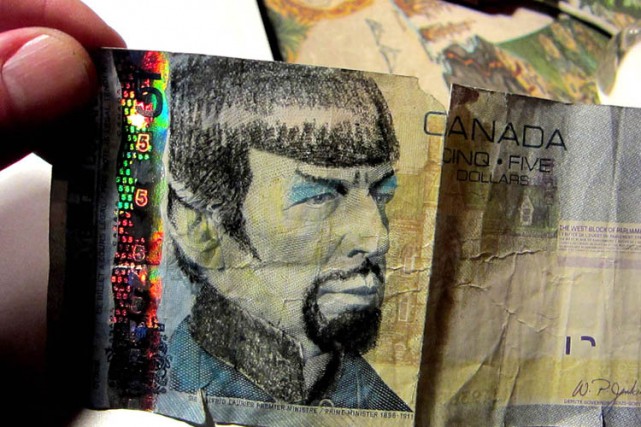 Photograph via Jim P on IO9

Canada has recently introduced new polymer bills that make doodling nearly impossible.
Of course that has not deterred digital artists 🙂

This Artist Transforms US Banknotes Into Hilarious Portraits