The Amazing Winners of the Smithsonian’s 14th Annual Photo Contest

The Smithsonian has just announced the winners of the 14th Annual Photo Contest. This year, they received more than 48,000 submissions from photographers in 146 countries and territories.

From Pradeep Raja Kannaiah’s Grand-Prize-winning shot of women praying in Indonesia’s Istiqlal Mosque to Prelena Soma Owen’s artfully framed photograph of elephants in Botswana, these images stood out to the judges as the most unique and memorable. Milan Sachs’ image “Resting in an NYC Laundry Room” received the highest percentage of more than 36,000 reader votes, earning her the Readers’ Choice award.

The end of this year’s contest also heralds the start of next year’s contest. The 15th Annual Smithsonian.com Photo Contest opened at 2:00 PM EST today and will run through November 30, 2017. For more information about the contest, categories, awards and eligibility click here.

This shot is of women praying inside Istiqlal Mosque during the month of Ramadan.

I am always looking for unique ways to showcase the beauty of elephants in the hope that it will make a difference in the way they are viewed and appreciated. This image was taken when a herd of elephants came down to the banks of the Chobe River in Botswana for an afternoon drink. The opportunity presented itself as the trunk of the elephant in the foreground framed the eye of the elephant in the background. I focused on the eye, and with some creative cropping, was very pleased with the final result.

Commuters on the London Underground are communicating. They are not communicating with each other, but across the world from their cell-like positions on the platform.

To me, sustainable travel means making connections with individuals, communities and landscapes. I usually hope to spend a month in one place, allowing me to get to know local people, from shopkeepers to scientists. I try to find ways to understand and document the issues that have the most impact on their daily lives. In this image, a man is looking out a door that just hours before led to his family’s bedroom. The tide was particularly high that day, and because of rising sea levels, the sea had risen high enough to chew away at the home. The back rooms crumbled into the sea while his family carried their belongings out the front door. Several homes fell into the sea that morning. In an overpopulated community like Guet Ndar, the fishing village in Saint Louis, Senegal, many families may live in one home. So the loss of a home is particularly impactful.

When I first arrived in Senegal, I spent my first few days asking people about what matters most to them, what changes they had seen in the community, what worried them, etc. Many people were worried about the increasing impacts of climate change. Herders living inland said there was so little rain, they couldn’t feed their herds and had become the first generation in their lineage to look for supplementary work outside of herding. Fishermen described their homes becoming inundated with water and the seas becoming more volatile.

I spent a month in Senegal documenting climate change as a human rights issue. I started photographing the issue through human relationships to the environment and to one another. The morning I photographed the high tides and the loss of homes was part of a personal realization that climate change isn’t just an environmental issue, it’s a human one. And I realized that the people who contributed very little to the problem―those living in poverty or directly dependent on natural resources―will be the first to feel the impacts of climate change. And they are already beginning to deeply feel the effects. It sparked my interest in learning about an environmental issues through conversation and photography. A year later, I spent a month in Panama’s Guna Yala region, an archipelago of tribally held islands in which communities are facing relocation (or already relocating) due to rising seas, lack of water and other climate-related changes and challenges. I plan to spend a month in four more locations around the world for a total of six “chapters” in the project.

I was surprised when I saw this old shoemaker shop with two workers, one of them a young woman doing a job usually done by older men. The look in her eyes is as strong and heavy as her work.

Dance improvisation in the studio

This photograph is of a woman in an NYC laundry room. It seems like she’s recalling something that recently happened to her. The subject is defeated, hurt and exhausted from this cycle she is in, like the cycle of a washing machine.

THE AMERICAN EXPERIENCE WINNER
“Before the Portrait” by Stephanie Foden 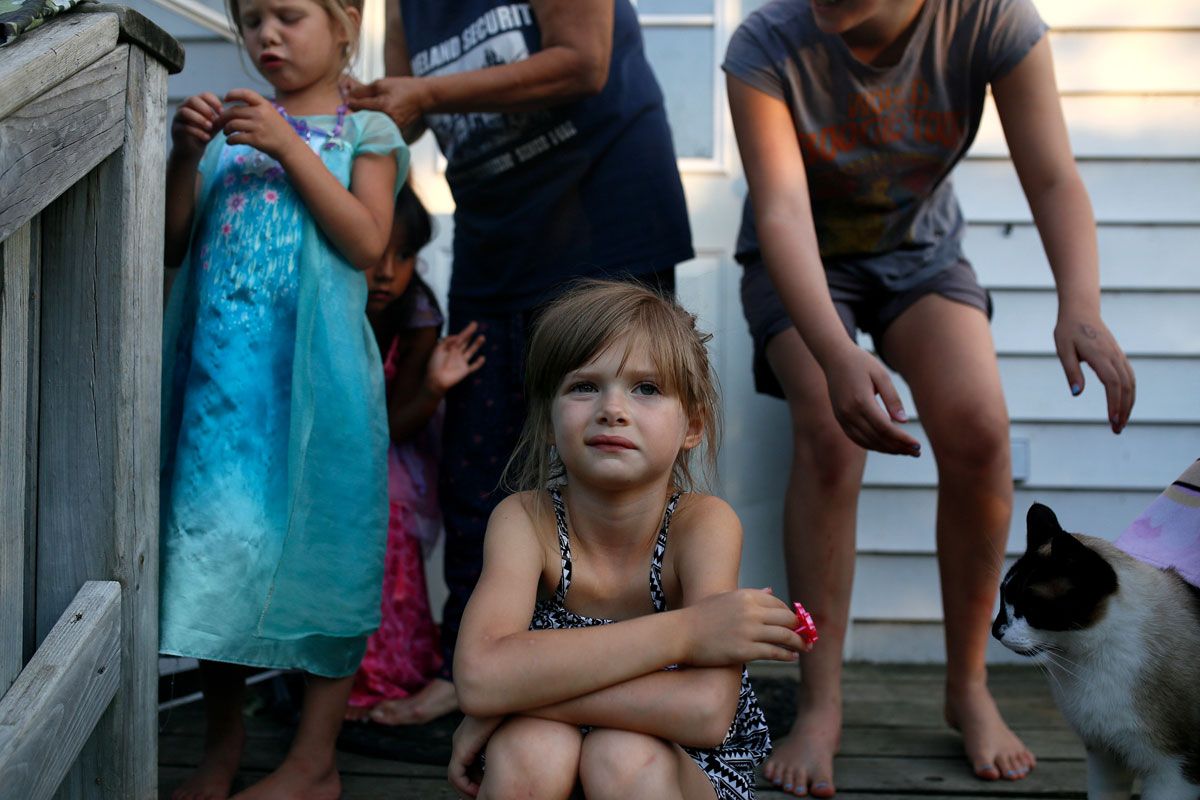 Lila Chosa sits on the side porch of her house while her family and friend get ready for a portrait behind her. Lila’s grandmother, Heart Warrior, has spent years battling to keep custody of her grandchildren in Minnesota. It’s part of a long history of Native American removal and resistance.

A man bikes by a Peter Hazel sculpture at the Burning Man festival in Black Rock City, Nevada.