A photograph of an erupting volcano hit by a bolt of lightning has earned Sergio Tapiro Velasco of Mexico the prestigious title of 2017 National Geographic Travel Photographer of the Year. Velasco will receive a 10-day trip for two to the Galápagos Archipelago with National Geographic Expeditions, as well as a $2500 prize. Velasco’s incredible photo was selected from over 15,000 entries from participants in more than 30 countries.

Velasco took his grand prize-winning photo, titled “The Power of Nature,” outside Colima, Mexico. For more than a decade, Velasco has been studying and photographing the Volcán de Colima, which is one of the most active volcanos in Latin America and also known as the “Volcano of Fire.” Before he captured this striking photograph, Velasco had been carefully tracking an increase in activity and closely watched the volcano for almost a month.

While shooting on a completely clear night just 12 kilometers away from the crater, Velasco heard a booming noise and witnessed the biggest volcanic lightning he’d ever seen. Until he reviewed the photos he’d taken, Velasco had no idea if he’d actually captured the spectacular event.

“When I looked on the camera display, all I could do was stare,” said Velasco. “What I was watching was impossible to conceive, the image showed those amazing forces of nature interacting on a volcano, while the lightning brightened the whole scene. It’s an impossible photograph and my once in a lifetime shot that shows the power of nature.”

The 2017 National Geographic Travel Photographer of the Year contest recognizes spectacular photos taken within the last two years, with entries in three categories: Nature, People and Cities. In addition to the grand-prize winner, top photos were selected in each of the three categories. First-, second- and third-place winners were awarded $2500, $750 and $500, respectively, as well as a subscription to National Geographic Traveler magazine.

Powerful eruption of Colima Volcano in Mexico on December 13th, 2015. That night, the weather was dry and cold, friction of ash particles generated a big lightning of about 600 meters that connected ash and volcano, and illuminated most of the dark scene. On last part of 2015, this volcano showed a lot of eruptive activity with ash explosions that raised 2-3 km above the crater. Most of night explosions produced incandescent rock falls and lightning not bigger than 100 meters in average. 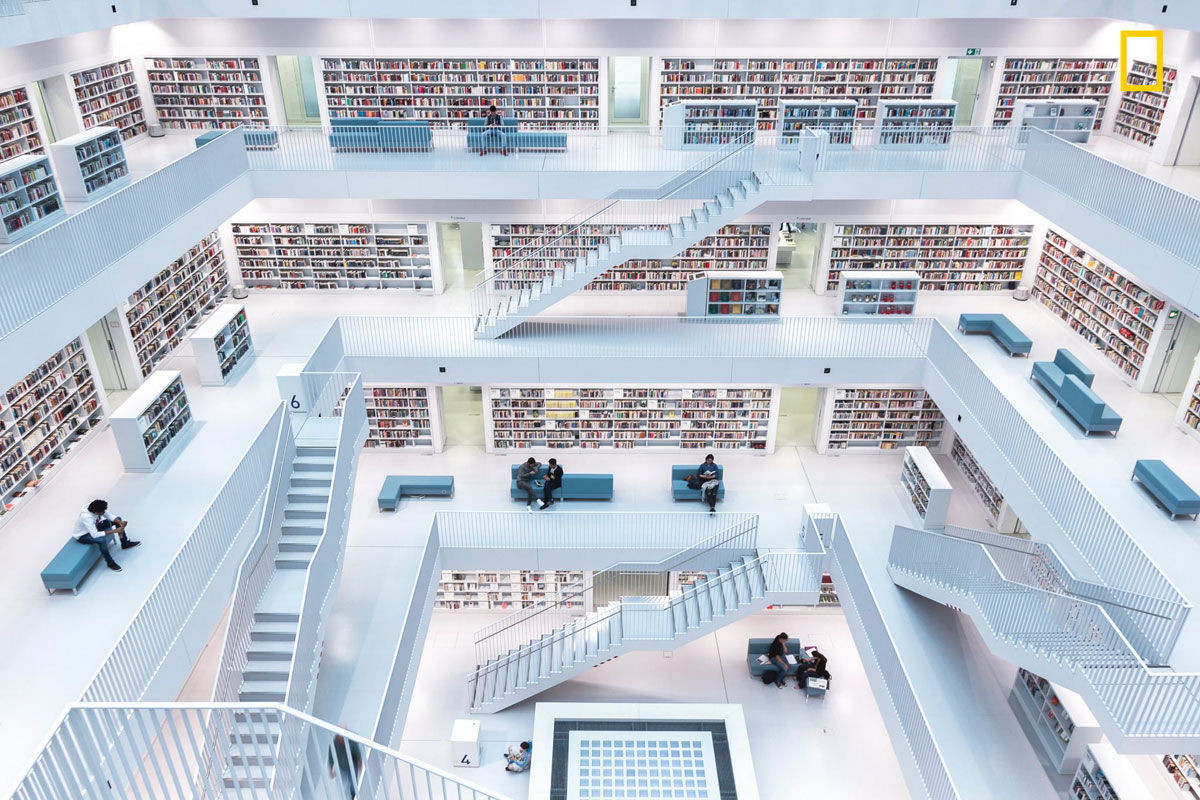 The modern interior of the city library in Stuttgart. With its wide-open space in the central, where natural light comes from through the windows on the top, it has a very unique atmosphere, where you can broaden your knowledge.

The Kowloon Walled City was the densest place on Earth. Hundreds of houses stacked on top of each other enclosed in the center of the structure. Many didn’t have access to open space.This notorious city was finally demolished in 1990s. However, if you look hard enough, you will notice that the city is not dead. Part of it still exists in many of current high density housing apartments. I hope this series can get people to think about claustrophobic living in Hong Kong from a new perspective. 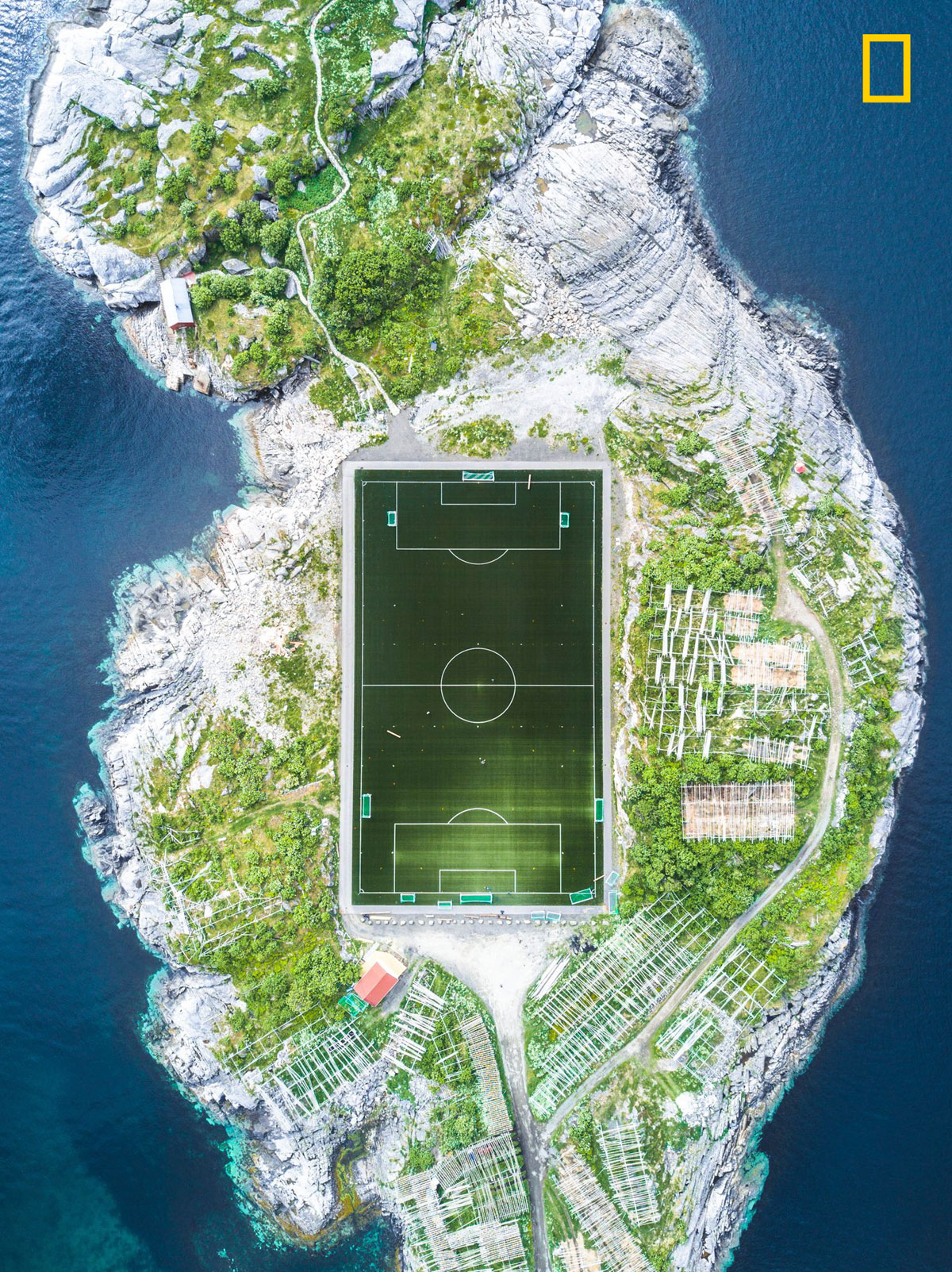 This football field in Henningsvær in the Lofoten Islands is considered one of the most amazing fields in Europe, and maybe even in the world. The photo was taken during a 10-day sailing trip in Norway in June 2017. We arrived to Henningsvær after a week of sailing through the cold and rainy weather. Upon our arrival, the weather cleared up. I was really lucky that the conditions were suitable for flying my drone, and I managed to capture this shot from a height of 120 meters.

This building is apartment complex in Gifu Prefecture of Japan. It is very colorful, but it is an ordinary collective housing where ordinary people can live.

New city on the desert

Swans who live vigorous even in mud.

This image was captured in Costa Rica when I was travelling from Monteverde to Playa Hermosa. As you cross over this river, you can stop and peer over the edge of the bridge. Below, reside over 35 gigantic crocodiles, relaxing on the muddy banks of the river. I wanted to capture the stark difference between the crocodiles on land and in the water. In the murky waters, the body contours of these beasts remain hidden, and one can only truly see their girth as they emerge from the river.

The marble caves of Patagoina

Shooting in the forest This photograph was taken in the evening hours of a humid early summer day in the forest of a small remote village in the Tamba area of Japan. It beautifully captures the magical atmosphere of Princess fireflies carpeting a stairway leading to a small shrine revered by the local people.

Mount Bromo volcano is a small, but active volcanic cinder cone on Java, Indonesia. Early 2016, I happened to be in Mt. Bromo during the increase of seismic activity and triggered the alert status to the second highest. 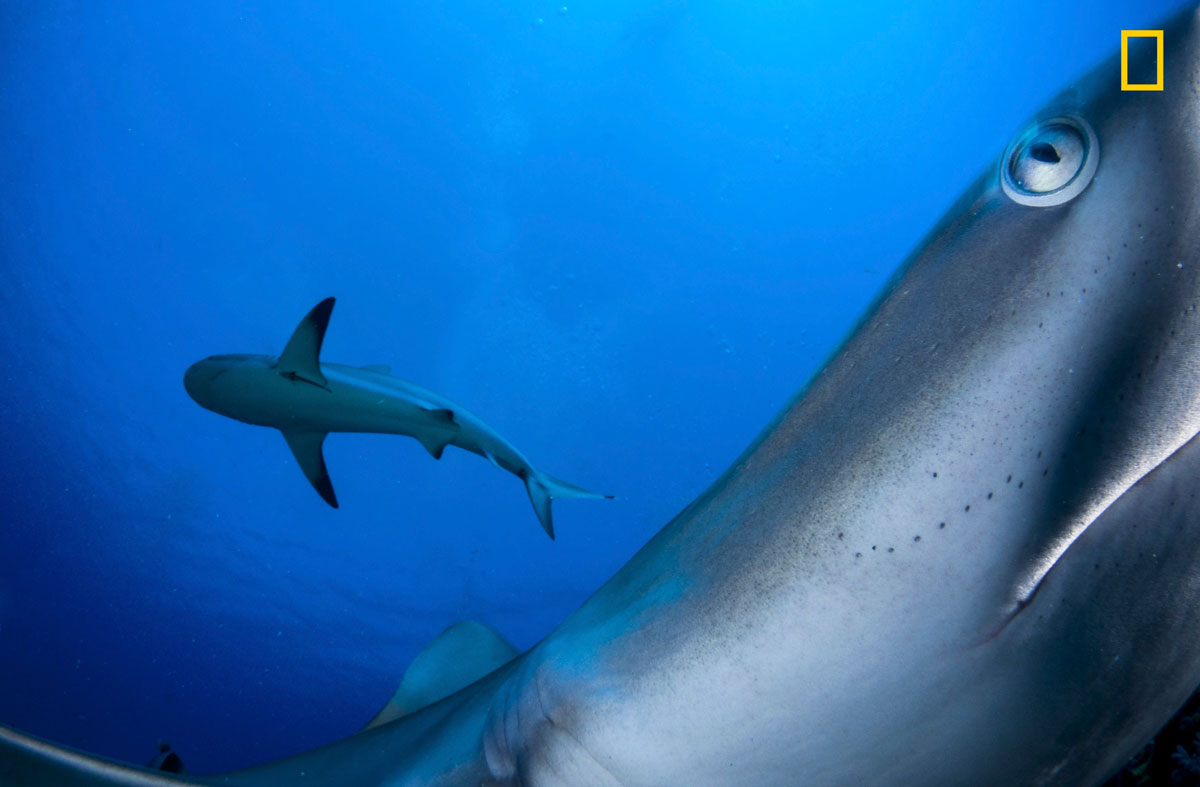 Caribbean reef sharks are usually shy so I placed my camera on a rock where I know they frequent and used a remote trigger to click away as they came in and bumped my camera around. 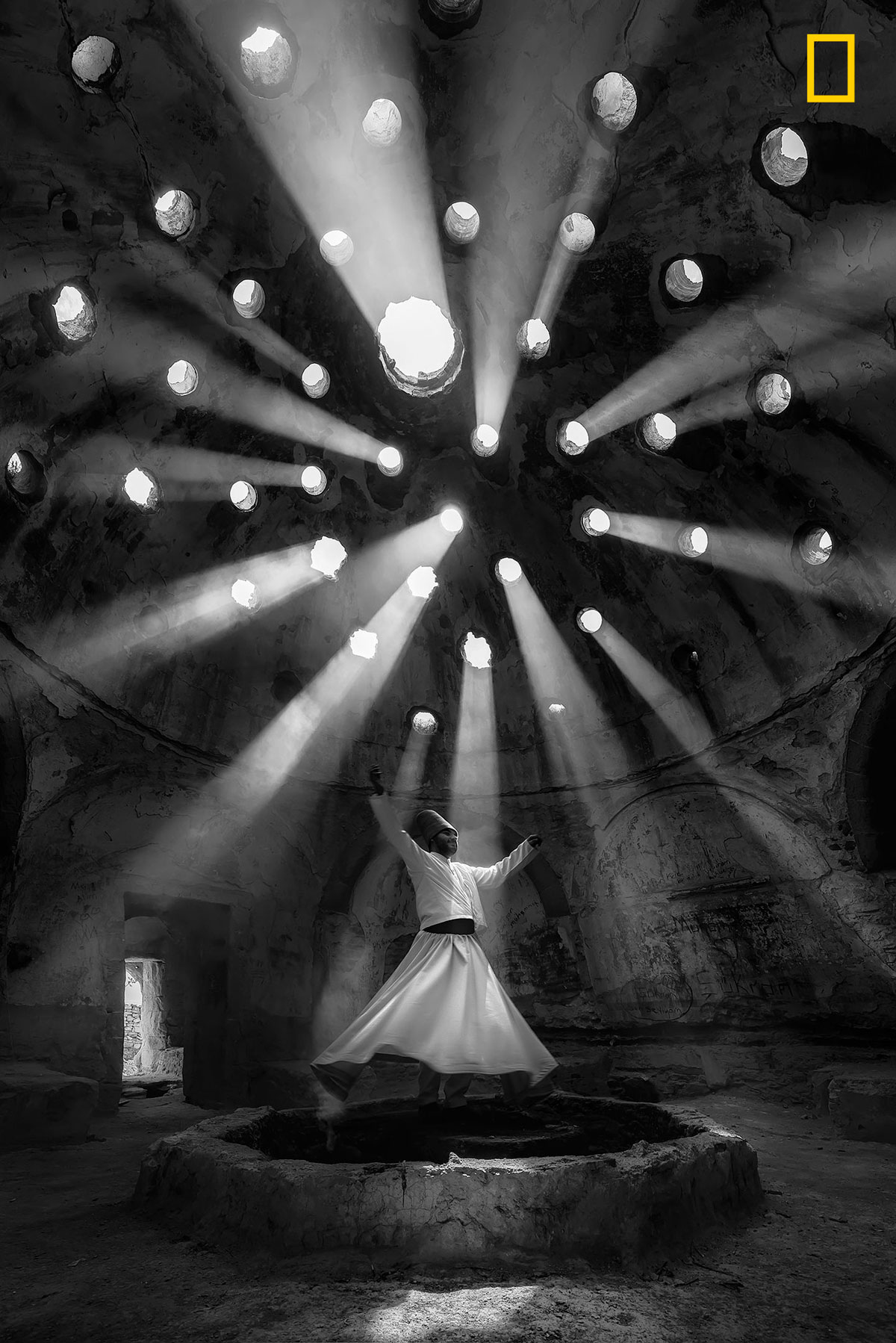 This photo was taken in Konya. Willing Dervish in an historical place of Sille KonyaTurkey. The ‘dance’ of the Whirling Dervishes is called Sema and is a symbol of the Mevlevi culture. According to Mevlana’s teachings, human beings are born twice, once of their mothers and the second time of their own bodies.

I recently traveled to Tavarua, Fiji to do some surf photography with pro surfer Donavon Frankenreiter at Cloudbreak. I’m always looking for new angles and perspectives. The usual surf shots have all been done so we decided to get a little creative. Makes you look twice.

A beautiful photo of a father and son sitting in white traditional attire with beautiful blue sky on the day of Eid al-Fitr in a mosque in New Delhi, India. The photo shows the beautiful bond which these two generation have been building up in a very simple and lovable manner.

The photo was taken on 23rd of July 2016 at Tongi Railway Station, Gazipur, Bangladesh. I was there for taking photos and waiting for a moment. A train from Dhaka toward another district has reached and stopped at the platform for 5 min for lifting passengers. It was huge raining. Suddenly I found a pair of curious eye was looking at me through the window and on his left an umbrella has been put for protect the rain. I got the moment. 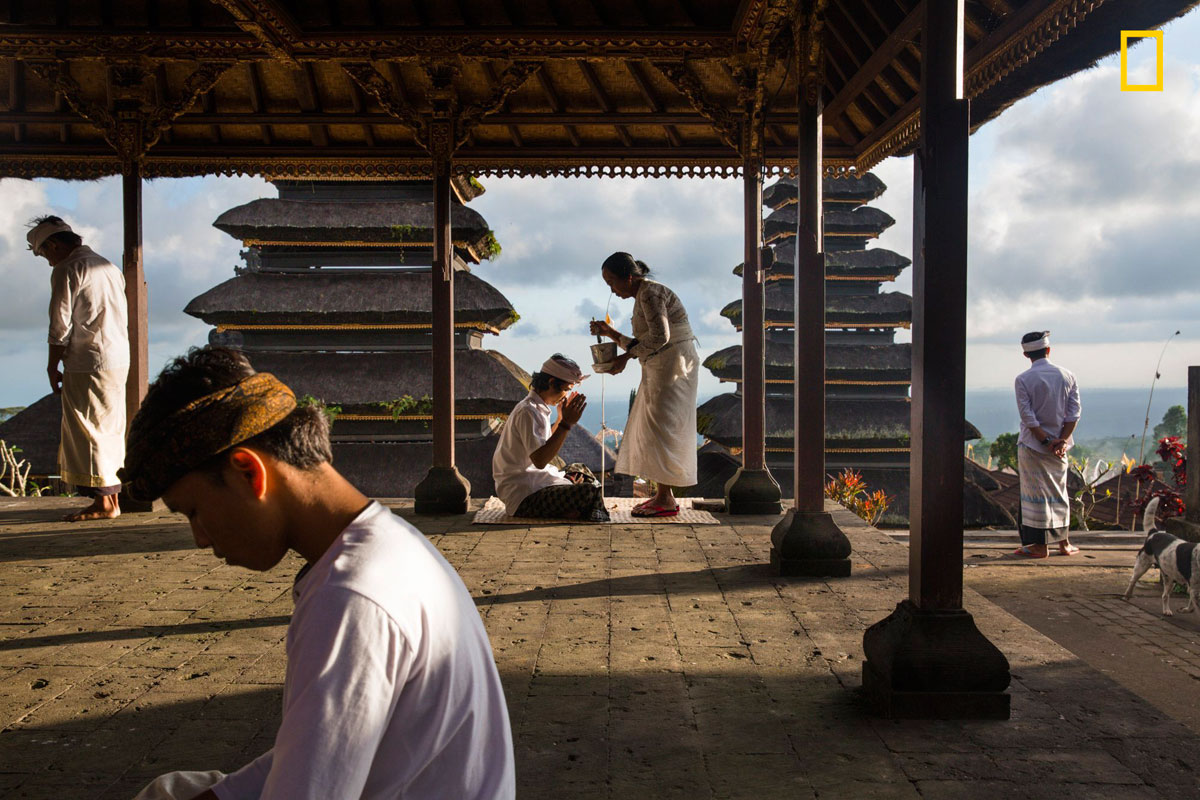 Besakih Temple has been known as Bali’s ‘Mother Temple’ for over 1000 years and is perched 1000 metres high on the southwestern slopes of Mount Agung. Here Balinese often come to offer up prayer and take blessing from the temple priests or “Pemangku” who reside there.