To complement their latest exhibition, the Art Institute of Chicago created a 3D replica of Van Gogh’s famous Bedroom painting, making the room available for rent on Airbnb for only US$10 a night.

Decorated in a “post-impressionist style, reminiscent of southern France and time gone by,” the room will make guests feel like they’re living in a painting.

Van Gogh’s Bedrooms exhibition will run through May 10, 2016 and brings together all three versions of The Bedroom for the first time in North America. 36 other works by the artist, including paintings, drawings and illustrated letters will also be featured.

For more information visit the Art Institute of Chicago’s official website. You can also find the Airbnb listing here.

Van Gogh painted his first Bedroom just after moving into his beloved “Yellow House” in Arles, France, in 1888. He was so enamored with the work, now in the collection of the Van Gogh Museum in Amsterdam, that after water damage threatened its stability, he became determined to preserve the composition by painting a second version while at an asylum in Saint-Rémy in 1889.

Identical in scale and yet distinct from the original, that second work is now one of the icons of the Art Institute’s permanent collection. Van Gogh created a smaller third version, now at the Musée d’Orsay in Paris, as a gift for his mother and sister a few weeks after making the second. While the three paintings at first appear almost identical, when examined closely, each reveals distinct and unique details. [source] 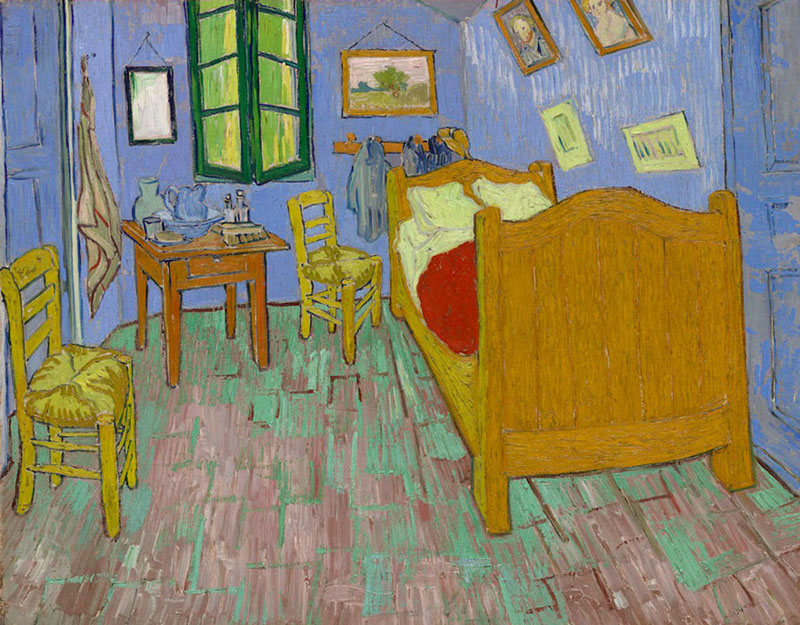