In 1995, residents of Tolyatti, Russia began to notice a German Shepherd at the edge of South Highway. Every day the dog would be in the same place, rushing at passing cars as if he was looking for someone.

As word spread, residents learned the dog had been riding in a car with a man and woman. The car crashed and the woman was pronounced dead at the scene. The man was taken to hospital but died a few hours later. Only the dog survived and he remained in the area where the car had crashed.

His name wasn’t known so residents started calling him “Kostya” or “Faithful”. Residents built dog houses for him, other tried to adopt him but he would only accept food, always returning to the spot of the crash. [source] 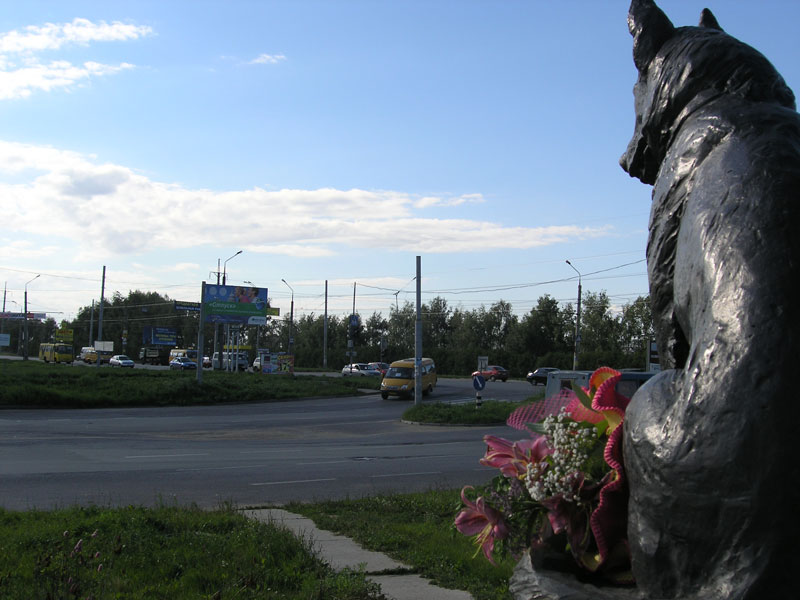 For 7 years Kostya remained in the same spot, running up to passing vehicles and looking inside. He became a local legend and a fixture for all who used the highway that connected the old city to the new. Tragically in 2002, Kostya was found dead in the woods. There were no signs of injury so it was presumed he died a natural death.

Saddened by their loss, the city erected a bronze statue in Kostya’s honour entitled, Loyalty (Russian: Памятник преданности). The sculpture was made by Oleg Klyuyev and stands about 1.5 meters (4.9 ft) tall. It is set on a granite pedestal at the intersection of South Highway and Lev Yashin Street. [source]

The memorial was dedicated on June 1, 2003 and is the first monument in Tolyatti not erected for political reasons. Today the memorial is a popular visiting place for newlyweds, as a symbol of unbreakable fidelity.

By tradition, the young couple, to demonstrate and ensure their commitment to each other and to a happy family life, rub the nose of the statue, so that the dog’s nose has become polished by many hands. [source] [via Wikipedia]