Goshin (Japanese: “protector of the spirit”) is a bonsai created by Bonsai Master John Yoshio Naka. It is a forest planting of eleven Foemina junipers (Juniperus chinensis), the earliest of which Naka began training into bonsai in 1948.

Naka donated it to the National Bonsai Foundation in 1984 for display at the United States National Arboretum and it has been there ever since. The individual trees represent Naka’s 11 grandchildren. [source]

Photograph above by Sage Ross

Naka began working with the first two of the eleven trees that would ultimately make up Goshin in 1948. Goshin first took shape as a forest planting around 1964. Inspired by a forest of Cryptomeria japonica near a shrine in Japan, Naka first combined the four trees he had already developed into a single, 4-foot-tall (1.2 m) composition. He soon added three more, to create a seven-tree forest bonsai (representing the number of grandchildren he had at the time). [source] 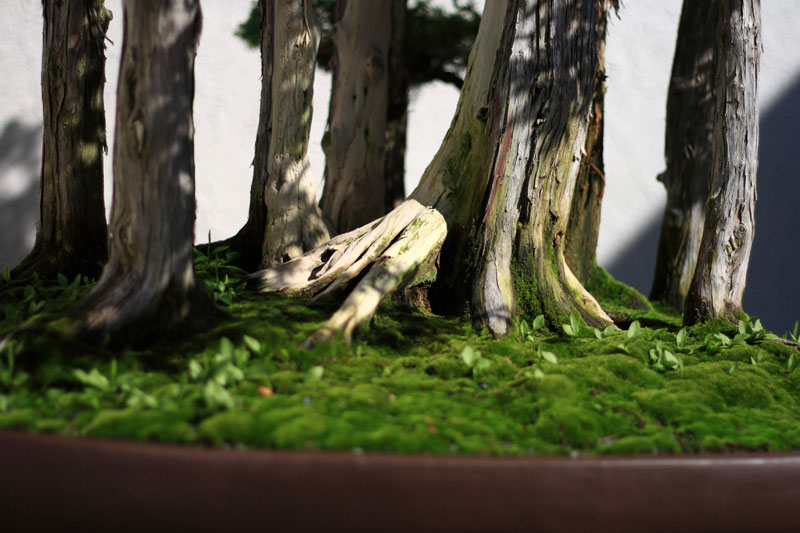 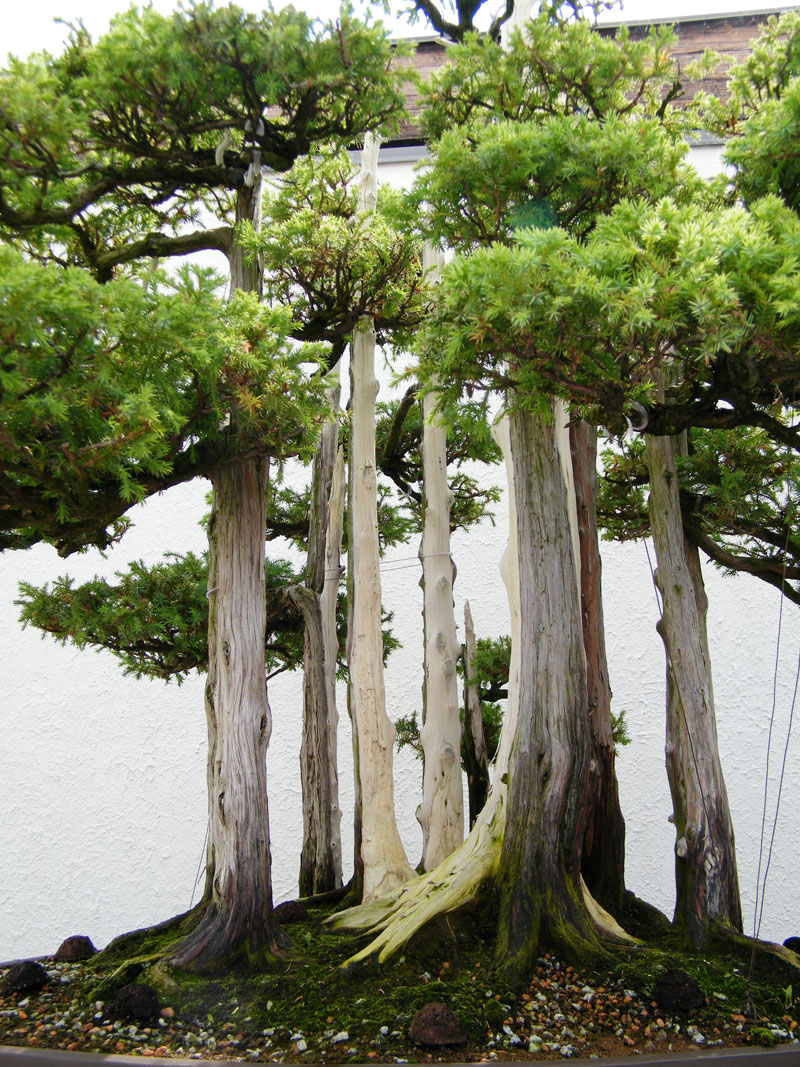 In 1984, Goshin was displayed at the Philadelphia Flower Show where it was viewed by nearly 250,000 people. At the show’s conclusion, Naka donated Goshin to the National Bonsai Federation (which he had helped launch in 1976), to be displayed in the new North American Pavilion (named in his honor) of the National Bonsai & Penjing Museum at the United States National Arboretum in Washington, D.C.

Since 1984, Goshin has repeatedly graced the covers of prominent bonsai magazines. Today it is one of the most widely recognized bonsai in the world. [source]

John Yoshio Naka was born on August 16, 1914 in Ft. Lupton, Colorado. A second generation Japanese-American, he moved back to Japan at the age of 8 where he studied Bonsai extensively under the influence of his grandfather. He returned to the United States near Boulder, Colorado in 1935; eventually settling in Los Angeles, California with his wife Alice and their three sons in 1946.

In Orange County, Naka and four friends founded a bonsai club in November of 1950, which is known today as the California Bonsai Society. He became an important force in American bonsai art in the 1950s and 60s and played a prominent role in the spread of Bonsai appreciation and art internationally. [source] 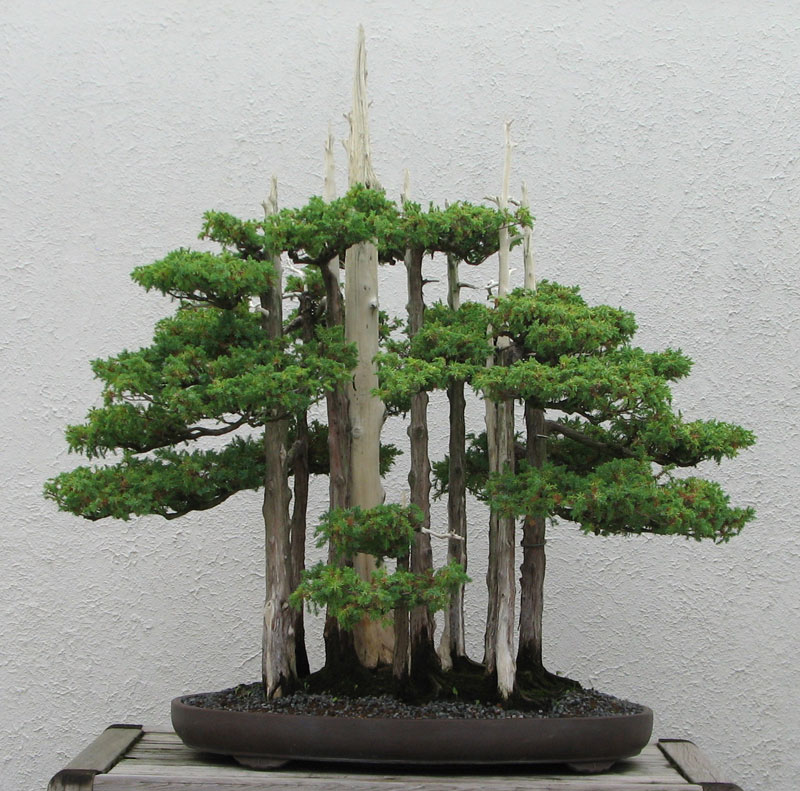 Naka was a founding director of the World Bonsai Friendship Federation (WBFF) and a co-signer of the Constitution of the Latin-American Bonsai Federation (LABF). He was an honorary advisor to the National Bonsai Foundation and was chosen in 1992 as one of thirteen honorees to receive a National Heritage Fellowship, the first bonsai artist to receive the prestigious award.

He also published two books, Bonsai Techniques I and Bonsai Techniques II, texts that are revered as being the bibles of Western Bonsai to many artists. These books would later be translated into French, German, Italian and Spanish. A horticulturist, teacher, author and master bonsai cultivator, Naka passed away on May 19, 2004. [source] 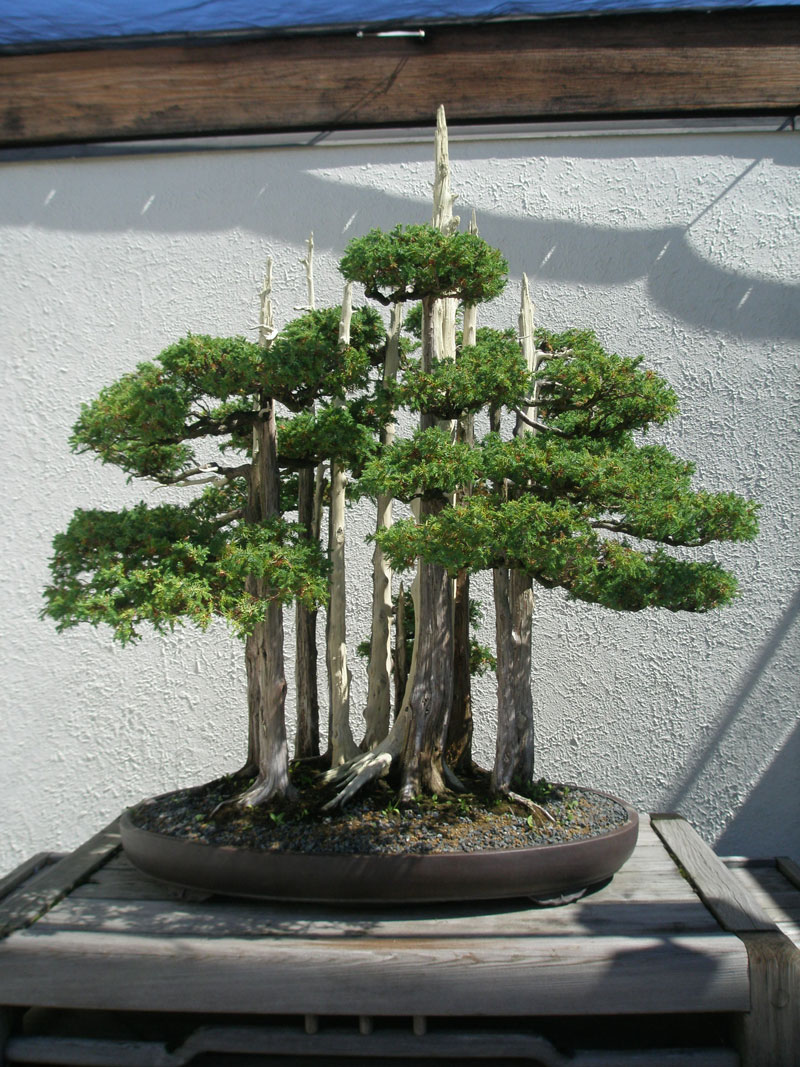