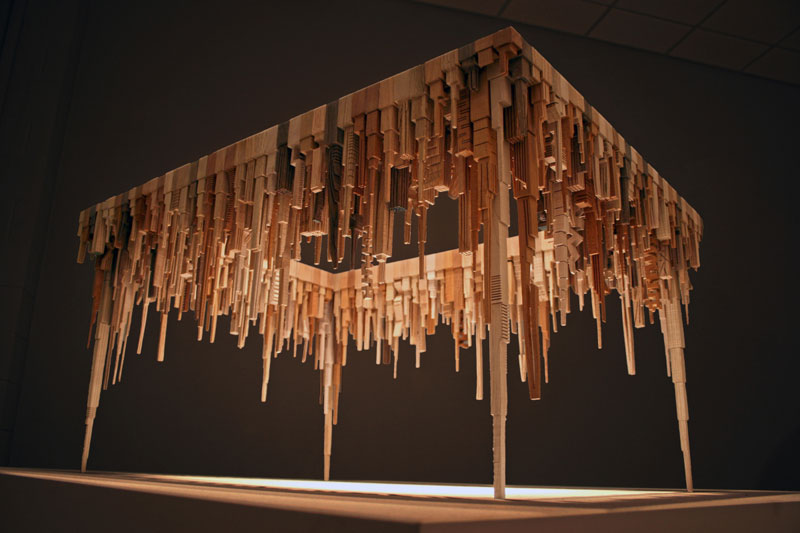 James McNabb is a Philadelphia-based artist specializing in woodwork. Together with his wife Stephanie and dog Buster, they are McNabb & Co., a design studio dedicated to developing heirloom quality products. In McNabb’s latest project, entitled City Series, the sculptures depict the outsider’s perspective of the urban landscape. Made entirely of scrap wood, this work is an interpretation of making something out of nothing. Each piece is cut intuitively on a band saw. The result is a collection of architectural forms, each distinctly different from the next.

In addition to wood sculptures, McNabb & Co. also build contemporary furniture pieces and incredible etched wood designs using state of the art laser engraving technology. They have also recently launched a Kickstarter campaign for the continuation of the City Series. The crowd-funding project ends on March 17, 2013 and they have reached 72% of their $5,000 target.

Links to Mcnabb & Co.’s online profiles can be found in the links below. 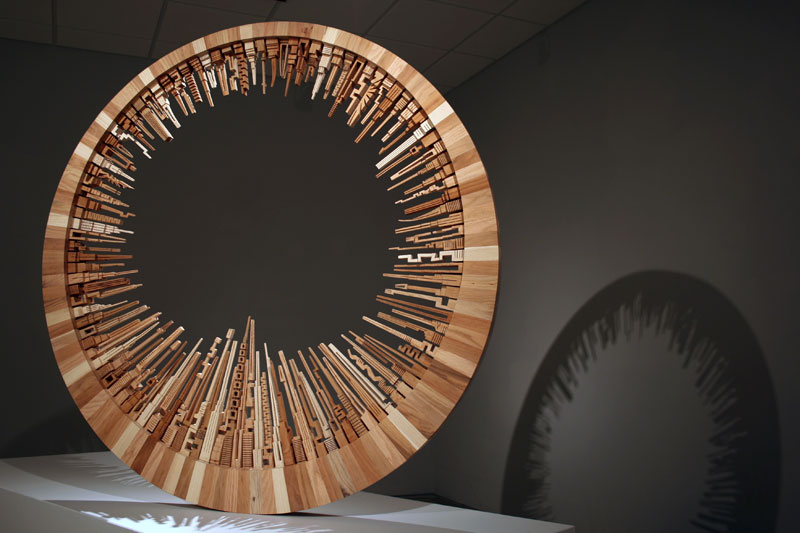 Inspired by wooden wagon wheels, this piece references the pilgrimage many make from the countryside to the city, in search of fortune and fame. City Wheel is composed of wedge-shaped pieces of cherry, oak, ash, and maple. After a few preliminary drawings to determine the geometry of each piece, a template was made to assure each was made to the correct angle.

Next, McNabb put his headphones on, found a good rhythm to work to, and started cutting. He finds this work to be very relaxing and therapeutic, an escape from some of the hyper-technical aspects of woodworking. Each piece is intricately cut using a band saw, no two alike, a reference to the idea that cities are the land of endless possibility. [Source] 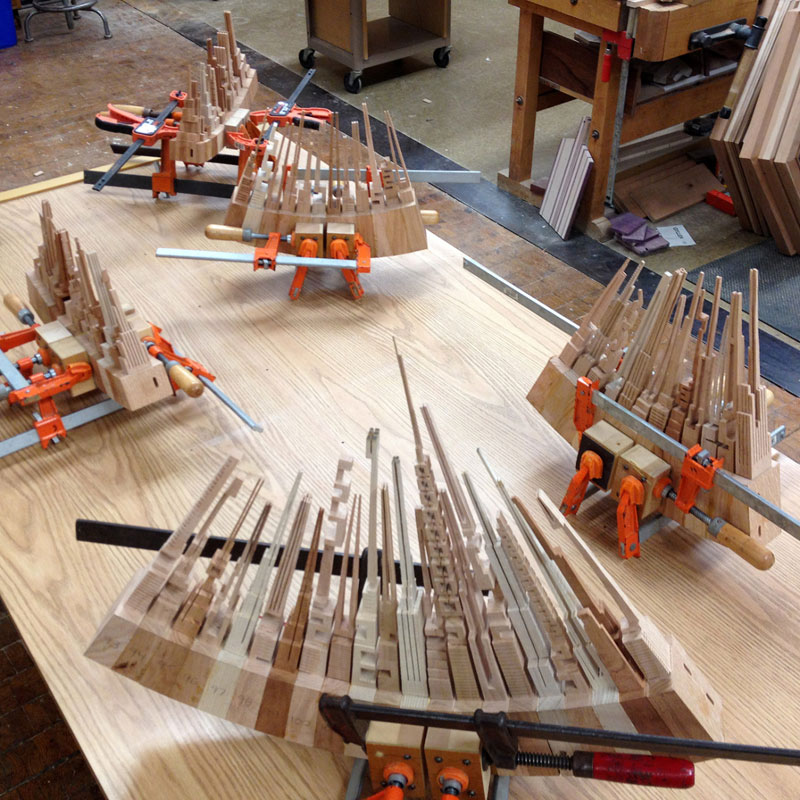 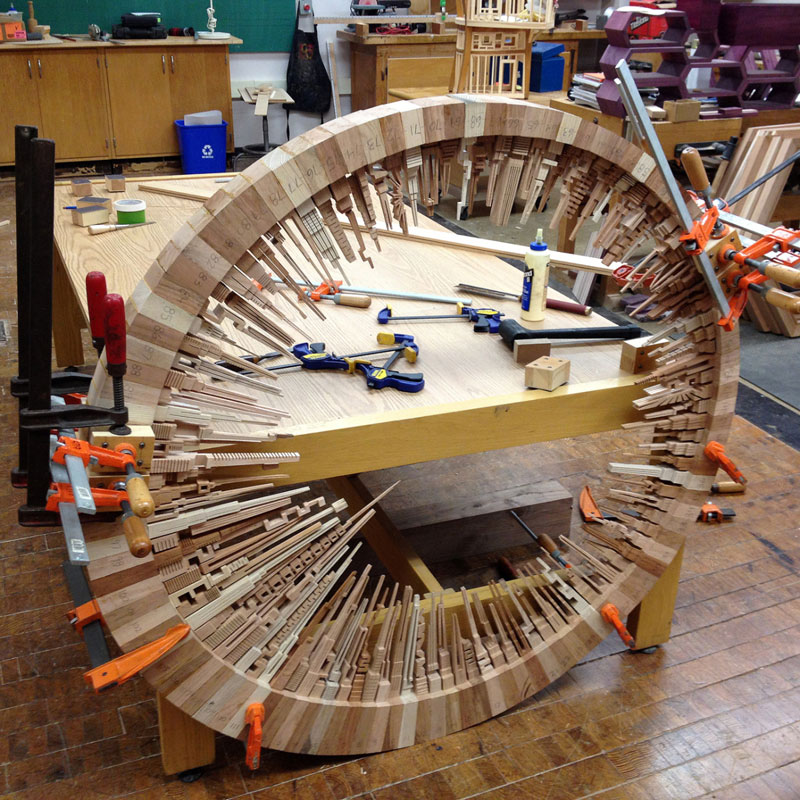 The journey from the suburbs to the city has a way of flipping your world upside down. This table shows several dynamic views of the skyline from extreme perspectives allowing viewers to see the urban landscape in ways they have never seen before. Direct lighting from above reveals amazing skyline shadows on the ground below the table. The squares of color and patterns provide a visual map of the city that lives below the surface.

Each block was intricately cut on a band saw and glued together into rows. Next, the rows were glued together. Finally each side of the table was joined. Four legs in each corner measure the same length, and when flipped over, act as legs for the table. The surface is sanded smooth, and showcases the random pattern caused by the various wood species in the table. [Source] 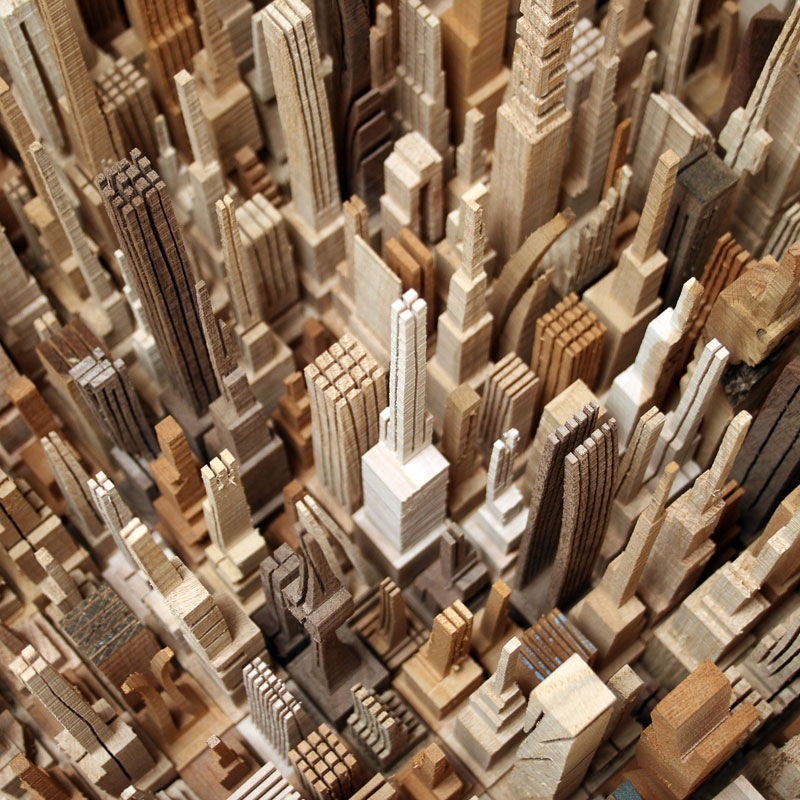 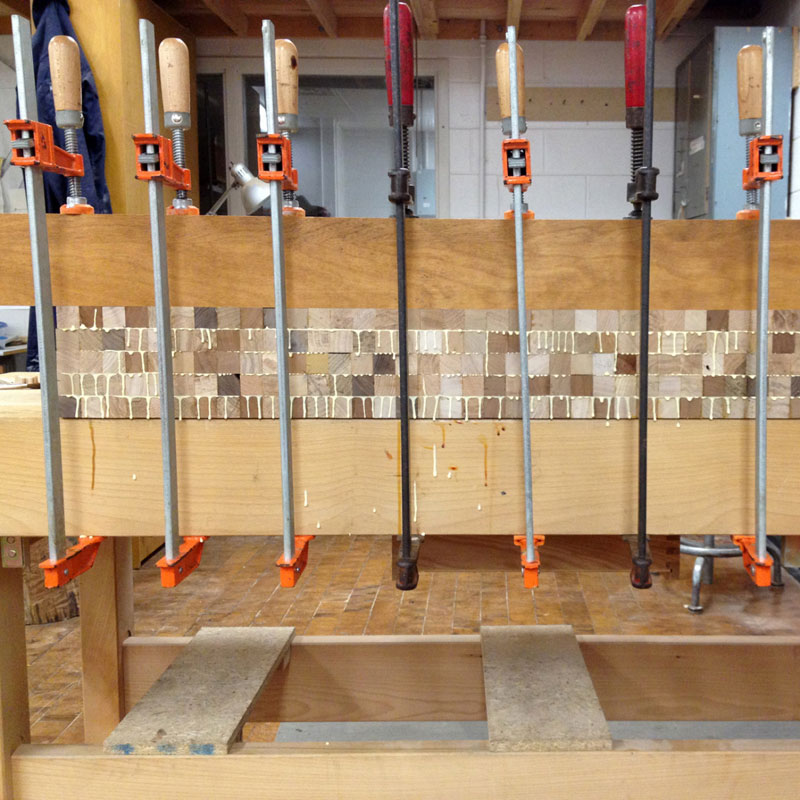 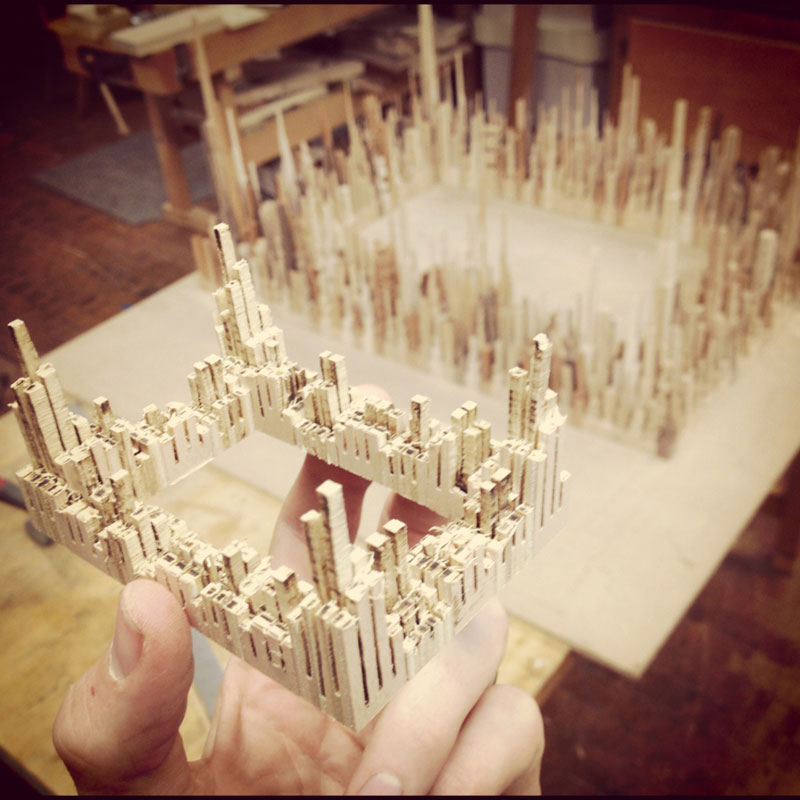 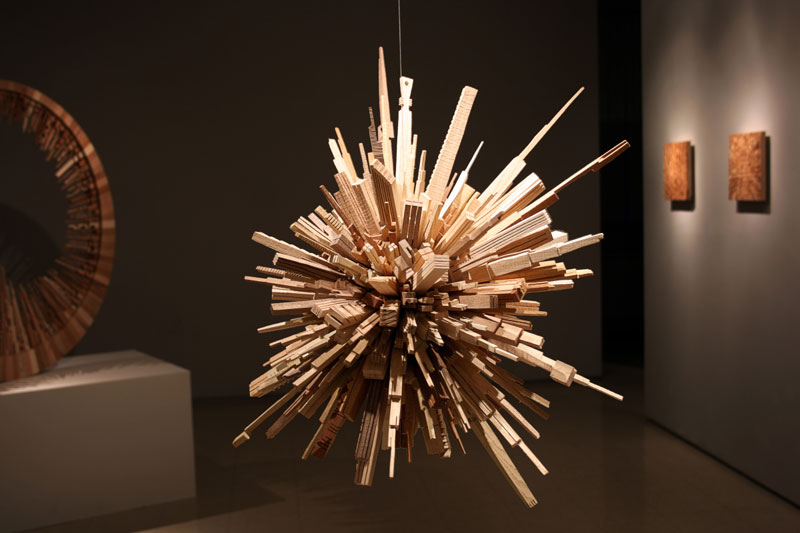 the epitome of the urban sprawl, this piece depicts a planet consumed by the city. A lathe turned wood sphere, entirely covered in abstracted urban architectural forms. Each piece was cut to shape on a band saw, and attached one by one to the sphere with wooden dowels and glue. McNabb used a sharp chisel to taper the bottom of each building, so that viewers can see down to the core of the sphere, what he considers “street view”. [Source] 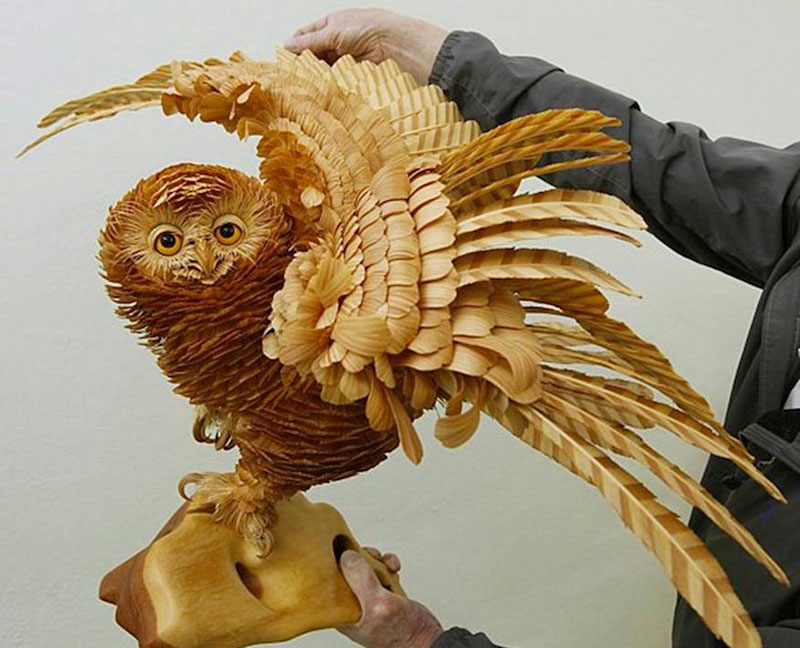 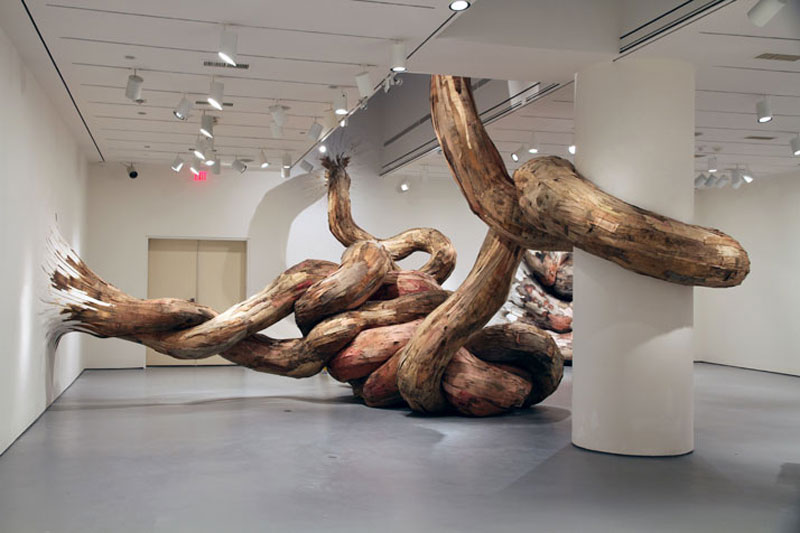