To mark Peace Day on September 21 2013, Jamie Wardley and Andy Moss, two artists from Bradford, England, set out with hundreds of volunteers to commemorate the 9000 civilians, Allies and German forces lost on D-Day, June 6 1944.

The Fallen project took place at Arromanches, a French tourist town that lies along the stretch of coastline designated as Gold Beach during the D-Day landings.

Over a period of five hours, volunteers used rakes and stencils to etch 9000 figures into the sand. The results were immortalized through photography with the etched figures washed away by the tide later that day.

Jamie Wardley and Andy Moss of Sandinyoureye funded the project with support from local building merchants Uriah Woodhead, who supplied all of the materials. For more information visit the official website at thefallen9000.info 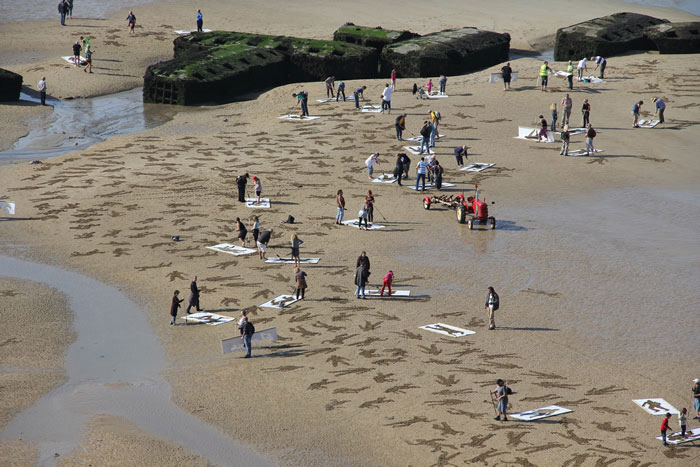 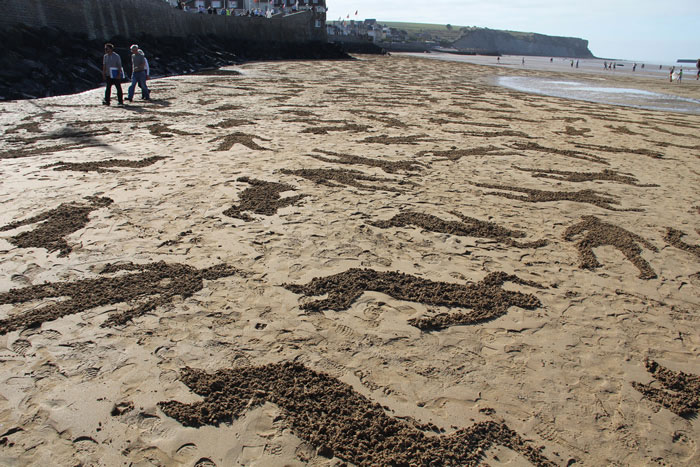 The Normandy landings, codenamed Operation Neptune, were the landing operations of the Allied invasion of Normandy, during World War II. The landings commenced on Tuesday, 6 June 1944 (D-Day), beginning at 6:30 am.

The landings were conducted in two phases: an airborne assault landing of 24,000 British, American and Canadian airborne troops shortly after midnight, and an amphibious landing of Allied infantry and armoured divisions on the coast of France.

The operation was the largest amphibious invasion in world history and was executed by land, sea and air elements with over 160,000 soldiers landing on 6 June 1944: 73,000 Americans, 61,715 British and 21,400 Canadians. 195,700 Allied naval and merchant navy personnel in over 5,000 ships were also involved. The landings took place along a 50-mile (80 km) stretch of the Normandy coast divided into five sectors: Utah, Omaha, Gold, Juno and Sword. [Source]

How the French Hid the Louvre’s Masterpieces During WWII