Portraits of Iconic Photos and the Photographers that took them

Over the last five years, photographer Tim Mantoani has taken over 150 portraits of famous photographers holding their most iconic shots. The goal of the project was to put a face to the talented professionals behind the photographs that so many of us can instantly recognize.

These incredible portraits have been published in a book called Behind Photographs: Archiving Photographic Legends. All of the portraits were shot in the giant 20×24 Polaroid format. You can find many more striking portraits on Tim’s website. You can also learn more about the book and purchase it at: behindphotographs.com

Steve McCurry holds his 1984 photo of a young woman from Peshawar, Pakistan. “I looked for this girl for 17 years and finally found her in 2002. Her name is Sharbat Gula.” [Source: Wired] 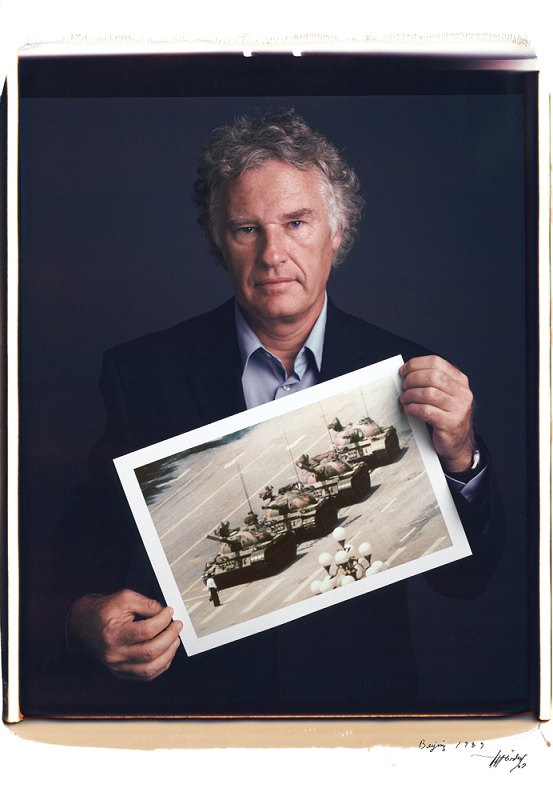 “Brian Epstein — Beatles’ manager — had just told them they were number one in America, and I was coming with them to New York, 1964.” – Harry Benson. [Source: Wired] “This is Virunga, the first National Park in Africa, in the Democratic Republic of Congo. The Silverback Mountain Gorilla, along with 6 females, had been killed by a group trying to intimidate conservation rangers into being less proactive in their efforts against poaching & illegal charcoal making.

There are only about 40 of these Silverbacks in the world, so the Rangers were devastated at the assassination. This procession went on for about 5 kms, moving the 600 pound body over hills & through the forest. Over 120 of these rangers have died in the last 10 years doing this job; most make less than $10 a month. They’re heroes, there’s just no other word that seems appropriate to describe these incredible African men.” – Brent Stirton. [Source: Wired] “No one knew such a beautiful warm day would serve as the backdrop to one of the most painful and confusing events to the heart of mankind. This picture is one small part of such a huge event that ties the threads of thousands of stories and millions of people together.

Written words will never convey the whole scope of the event, nor even summarize the sounds, the smells or even the voices that are frozen in my memory bank from that day. I did the best job I could in photographing 9/11 so that future generations would have an idea of the scope of what happened, to have the evidence of how innocence can so easily be snatched away in a razor’s edged moment of time.

My hope is that in time the wounds and pain will heal and that wisdom and peace will prevail among the darkness of this event, so that humanity can move forward into a time of grace and understanding.” – Lyle Owerko. [Source: Wired]

Gripping Black and White Portraits of the Homeless by Lee Jeffries