The Evolution of the BMW Art Car 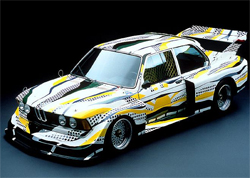 The BMW Art Car Project was introduced by the French racecar driver and auctioneer Hervé Poulain, who wanted to invite an artist to create a canvas on an automobile. It was in 1975 when Poulain commissioned American artist and friend Alexander Calder to paint the first BMW Art Car. This first example would be a BMW 3.0 CSL which Poulain himself would race in the 1975 Le Mans endurance race.

To date, a total of 16 BMW Art Cars, based on both racing and regular production vehicles, have been created. The most recent artist to to join the program is American artist Jeff Koons. According to Thomas Girst, who has been in charge of the BMW Art Cars project since 2004, the purpose of the project has changed over time: “In the beginning the cars were raced. There wasn’t much of a public relations effort around them… Since then, some of the Art Cars have been used in advertisements to show that BMW is a player in the arts.”

The BMW 3.0 CSL, with which Alexander Calder laid the foundations of the Art Car Collection in 1975, was also one of the last works he produced before his death. As a sculptor, Calder broke free from the formal restraints imposed by the sports car and drew his own unique artistic lines.

Calder’s artwork was on show the very same year at the 24-hour race at Le Mans, an event which the artist attended. Calder died November 11, 1976, in New York City, just after supervising the installation of his largest retrospective exhibition, at the Whitney Museum of American Art.

“The pattern should be regarded as agreeable decoration”, says Frank Stella of the black and white square grid with which he covered the BMW 3.0 CSL. A pattern which has an evenness and precision reminiscent of oversized graph paper.

Within the grid, numerous lines run across the whole bodywork and leave the car looking like one great pattern. While working on his draft version, Stella disassociated himself from his usual random style of painting and sought inspiration from the technical aura of the sports coupé. The BMW 3.0 CSL took part in the 24-hour race at Le Mans – for Stella, a passionate fan of motor racing, it was a very special premiere for his new work of art.

“I wanted to use painted lines as a road, pointing the way for the car,” says Roy Lichtenstein of his portrayal of the BMW 320i. “The design also shows the scenery through which the car has driven. You could call it a list of all the things a car experiences – the only difference is that this car mirrors all these things even before it takes to the road.”

Also noticeable are the typical “Benday dots” – oversized dots which recall Lichtenstein’s world-famous comic-strip pictures. In the same year, his BMW Art Car won second place in its class at the 24-hour race at Le Mans.

Whereas the other artists initially painted their pattern on a scaled-down model and then had it transferred to the car by assistants, the Pop Art legend Andy Warhol painted the 470 hp BMW M1 himself from start to finish.

On the subject of his sweeping brush and finger strokes, he said: “I tried to portray speed pictorially. If a car is moving really quickly, all the lines and colors are blurred.” Warhol’s rolling work of art had its first and only race outing at the 24-hour race at Le Mans in 1979, when it was sixth in the overall ranking.

On the subject of his work, Fuchs says: “In the painting, I gave expression to various experiences, fears, desires and implorations, but also to free artistic creation. I call this car ‘Firefox on Harehunt’. It represents a hare racing across a motorway at night and leaping over a burning car the – primeval fear and bold dream of surmounting a dimension in which we live. It tells me its colors, I read them in its lines and shape, I hear its speedy call and can already see the handsome hare leaping through flames of love, driving away fears.”

The BMW designed by Robert Rauschenberg was the first Art Car in series production. Rauschenberg’s design was also unusual because: firstly, he used, in part, well-known works of art, such as Bronzino’s Man of the World, finished in 1535, and a work by the French artist Jean Auguste Dominique Ingres.

Rauschenberg worked these pieces, and his own photographs of trees and swamp grass, using photographic techniques and then projected them onto the bodywork of the car. For the first time, even the hub caps were included in the design, on which are depicted photos of antique plates.

Ken Done had definite ideas from the very first moment as to how to decorate the BMW M3 he was given by the Australian BMW Motorsport department.

On the one hand, it was to express something of the fascination which this high-performance vehicle held for him. On the other, it had to be typically Australian and reflect the vitality of his home continent. Done therefore decided to go for exotic colors and paint parrots and parrot fish. Animals that in his eyes particularly share two characteristics with the BMW M3: beauty and speed. The result is as appealing as it is original: Done’s Art Car symbolizes both immense dynamism and mysterious exoticism at the same time. 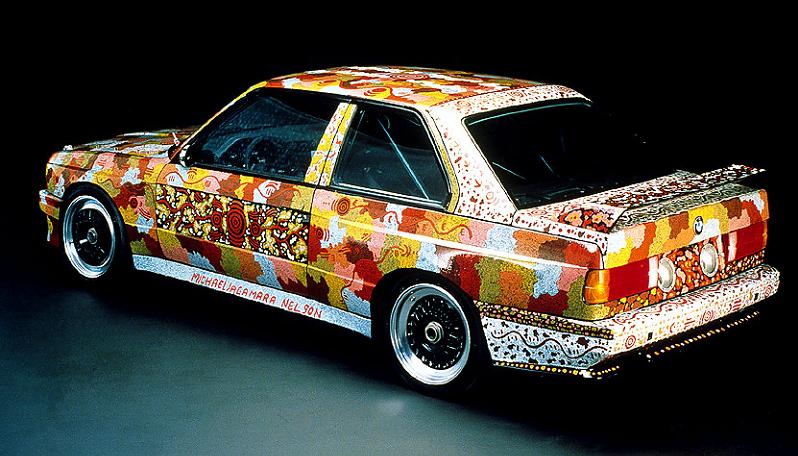 Papunya paintings, like those of MJ Nelson, can be understood as aerial views of landscapes. They feature diverse forms symbolizing water, caves, men and animals – and simultaneously embody religious myths (“dreamings”) which have been handed down from one Aboriginal generation to the next in the form of rock and cave paintings for thousands of years.

In the design of the BMW 535i, Matazo Kayama wanted on the one hand to express his fascination with BMW technology and on the other evoke vivid associations with modern Japan.

He reverted to his earlier theme “Snow, Moon and Flowers”, but painted it in a totally new way using an airbrush. To highlight the contrast and to emphasize the elegant quality of the car, Kayama sprayed fine blue shadows on parts of the silver bodywork and then used classical Japanese techniques in the second phase such as “Kirigane” (metal cutting) and “Arare” (foil impression). He cut out small pieces of silver, gold and aluminum foil individually and transferred them to the bodywork.

César Manrique had a clear point of view on the design of the BMW 730i: in his eyes, the automobile is an indispensable feature of daily life; it greatly influences the way we see the world around us.

It’s no surprise, then, that the artistic examination of the car suggested itself to him. When designing the car, Manrique particularly wanted to “combine the notions of speed and aerodynamics with the concept of aesthetic appeal in one object.” And he succeeded: glowing colors and broad, sweeping strokes which blend into the outlines of the car are suggestive of effortless gliding and graceful movement.

With the painting of the BMW 525i, Esther wanted to link this handed-down art form to the modern appearance of the automobile. A challenge that Mahlangu mastered outstandingly with the creation of the first African Art Car.

In order to get a feeling for the completely new medium, the artist first of all painted the door of another BMW, before she ventured to create “her” Art Car. Within a week, she transformed the 5 Series saloon into a masterpiece of African Ndebele art – and established herself as the first woman in the list of international Art Car artists.

For A.R. Penck, the BMW Z1 was already a “work of art”, in which the creativity and fantasy of the engineer and designer were reflected.

An automobile then which simultaneously lives up to the name Art Car in several senses. And it was from the technical design of the Z1 that Penck drew his inspiration for his work. The artist set the modern appearance of the car in contrast with the sign language, which in its simplicity recalls prehistoric cave paintings. However, it is at the same time a challenge to the observer, as the apparently straightforward symbols, evolved by a long process of abstraction, are in fact ciphers to be decoded.

“The automobile is a sought-after possession in society,” reflected Chia when he had finished his work. “All eyes are upon it. People look closely at cars. This car reflects their gaze.” The design of the 13th BMW Art Car was not Chia’s first artistic adventure with an automobile; as a child, he drew graffiti on cars.

“BMW gave me the model of the car and I kept looking at it and looking at it”, says David Hockney on the creation process of his BMW Art Car.

“And then, I must admit, I also looked at the other Art Cars. In the end I thought, probably it would be good to perhaps show the car so you could be looking inside it.” To turn his idea into reality, Hockney took several months and allowed the inside of the BMW 850 CSi to be outwardly visible. Stylized intake manifolds of the engine appear on the hood, and the silhouette of the driver can be seen on the door. And you don’t just see the inside of the car, but also excerpts of an abstract landscape. Because “traveling around in a car means experiencing landscapes”, says Hockney, “which is one of the reasons why I chose green as a color.” 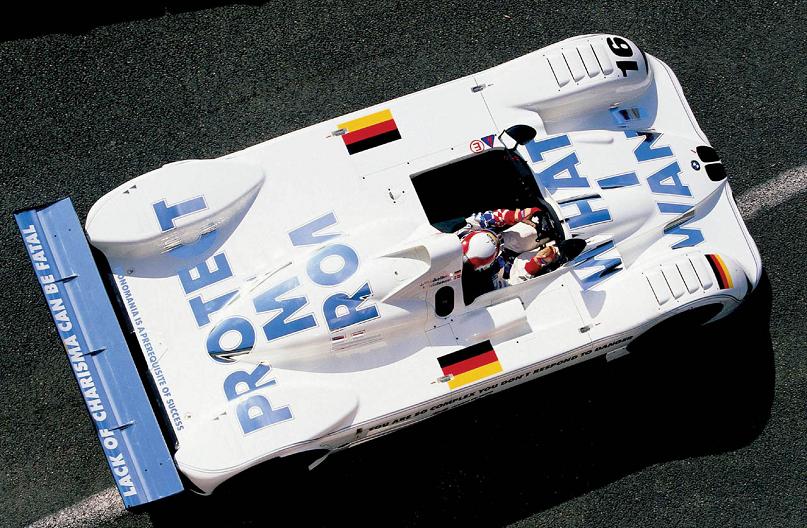 The American concept artist, Jenny Holzer, has covered the 15th Art Car, a BMW V12 LMR, with surprising messages – messages which she says “will probably never lose their relevance”.

The expression of her concept is based on traditional features, colours and graphics of the racing car design. Chrome letters made of reflecting metal foil, outlined with phosphorescent colour, give the text an almost magic light effect. What is crucial for the perception of her word art is the context in which it is presented. “Protect me from what I want” – seen against the backdrop of the most spectacular car race in the world, with its battle for places and prestige, the word artist’s plea for survival gains a whole new meaning. “You are so complex you don’t respond to danger” – a provocation that could not have been put better when referring to the world of motor racing. Jenny Holzer’s V12 LMR takes the BMW Art Car idea back to its roots: Le Mans.

Eliasson’s project transforms an object of advanced industrial design into a work of art that critically and poetically reflects on the relationship between global warming and the automotive industry. The BMW H2R race car, a hydrogen-powered vehicle, was developed to attain speed records while pursuing a sustainable future based on the use of regenerative fuel. Eliasson has removed the car’s outer shell and replaced it with a complex, translucent skin made of steel mesh, reflective steel panels, and many layers of ice. “Movement has consequences for self-perception.” 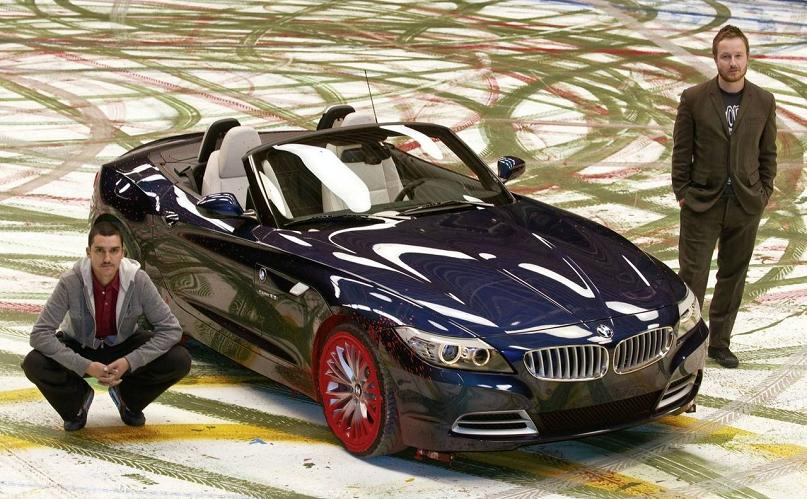 Imagine a canvas nearly as large as a football field. On it, bold, swirling shapes in primary colors like red, yellow and blue. As the eye uncovers the rhythm of the lines, curves, circles and color splotches, something else is revealed: these forms must have been created by tire treads! A work of art like no other, created by an artist like no other 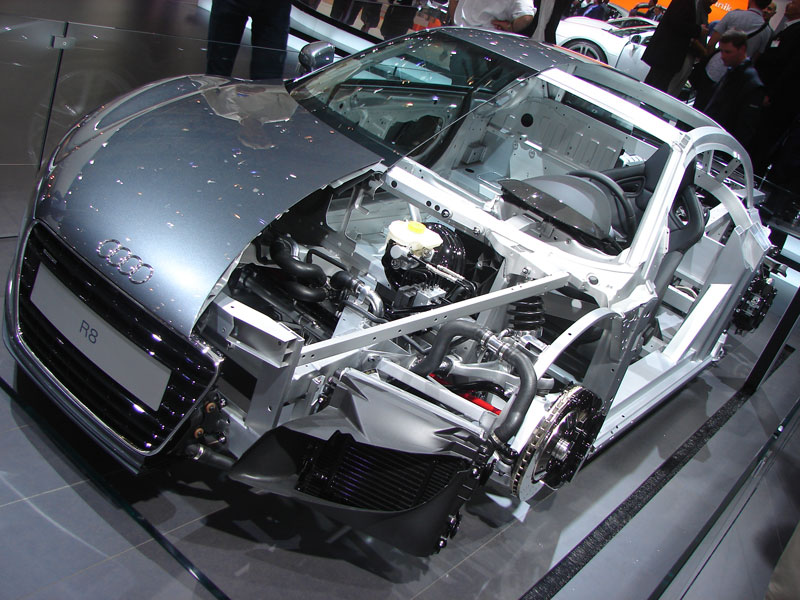