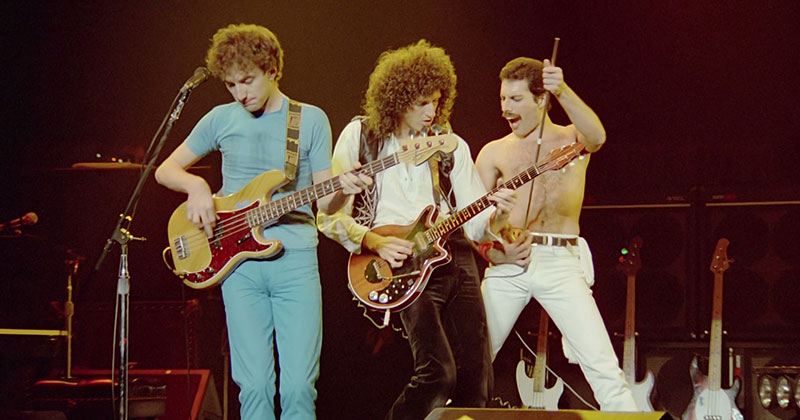 In 1981, Queen—at their near peak—played two sold out shows at the Montreal Forum on November 24th and 25th. The shows were filmed and recorded in extremely high quality, however the shows were also rife with controversy. As lead guitarist Brian May explains:

Saul Swimmer had the idea that he could film a Queen concert, in a very high quality 35 mm double anamorphic way. For a start, we were not on tour, so all the sound and lights and production and CREW had to be reassembled just for this occasion, and we had to rehearse ourselves up to speed. Plus, we didn’t get on with Mr Saul Swimmer at all. Freddie in particular took an instant dislike to the man, and this turned to something like hatred, when we discovered on the first night that Swimmer had put up his own lights on the audience, changed the colours in our lights, and had cameras all over the stage … obviously we were not going to be able to treat it like a normal gig. It got worse on the second night, when Saul Swimmer demanded that Freddie wear the same clothes as the first night … and make the same moves … this guy had no idea that the show wasn’t choreographed … we basically did what we liked … So tempers flared … and it shows.

What you will see in this film is a very edgy, angry band, carving out a performance in a rather uncomfortable situation. But it does mean it’s very high energy, real, and raw. In addition, although the actual quality of the film was great, you will see camera work from camera men who did not remotely know the show, directed by a director who didn’t know the show either. The subsequent editing was consequently chaotic. They cobbled together bits of both shows visually, choosing the bits where the cameras had found the right person at the right time. They then matched up the sound as best they could, but there were many bits where you were hearing sound from one night, but watching the visuals from the other. Still, the film went out, and WAS seen by a lot of people in a ‘Live’ situation.

Finally, we bought the whole thing off Swimmer last year (2006) with the kind help of Eagle Rock. Finally it could be sorted. The work that has gone into rescuing it is immense … I can’t even get into all the details, but Justin Shirley-Smith, and Kris Fredriksson have put nine months of loving care into rebirthing this baby … It involved finding the master 24-track tapes, figuring out how they had been chopped up, digitally copying them, and rebuilding them into complete performances, and then after much cleaning up, making a splendid new mix in 5.1 surround.

The visuals were in a sense harder. The surviving negative went to be doctored in the USA — by a process using using algorithms invented by John D Lowry of NASA for rescuing the film from the Apollo Moon missions. (Astrophysics gets everywhere!) You know how quick computers are these days … ? Well, to give you an idea of the huge number-crunching involved, it took 700 Apple Mac G5’s one MONTH to process this film. The computation compares a frame with the ones before it and the ones after, and uses the comparison to remove dirt, scratches and some of the defects of the original filming. In the case of the feature film Singing in the Rain … it apparently removed the RAIN! So adjustments had to be made! In our case it worked well, as you will see — the quality is magnificent — particularly noticeable in the incredible close-ups of Freddie in “Bohemian Rhapsody”.

Having said this, the close up of Freddie is just about all you will see in “Bo Rap”. Saul Swimmer’s editors made their selection of shots to use, and the footage they left on the cutting room floor has never been seen again. So no proper re-edit of the visuals was possible. It’s kinda sad, because in addition to all the cut-aways we might have liked to use, bits of songs are missing, and the whole of “Flash” and “The Hero” will never be seen because the visuals don’t exist. These tracks ARE however on the CD version of Queen Rock Montreal — and sound great! And in view of what happened later, no-one is upset now that this is a document which concentrates on Freddie.

So our boys, stuck with very few options, were still able to restore all the songs to their full length, and, with modern digital artistry, make lots of improvements. But to end up with a version that is much much more true to what actually happened at any given moment, Justin and Kris mostly had to match up all the sound bites to picture. It’s a great piece of work.

Well, Maybe I’ve spoiled it for you by telling you all this, but I wanted you to appreciate the work that’s gone into it, and how worthwhile the project has been, made possible by Eagle Rock. And I do find that once I’m five minutes into the film, I’m caught up in it as a real live show.

These are just a few of the standout moments from the Montreal shows. You can find the entire 24 song setlist/concert on YouTube here. Cheers to Chief Mouse for the epic upload! Once again you can watch it all here.