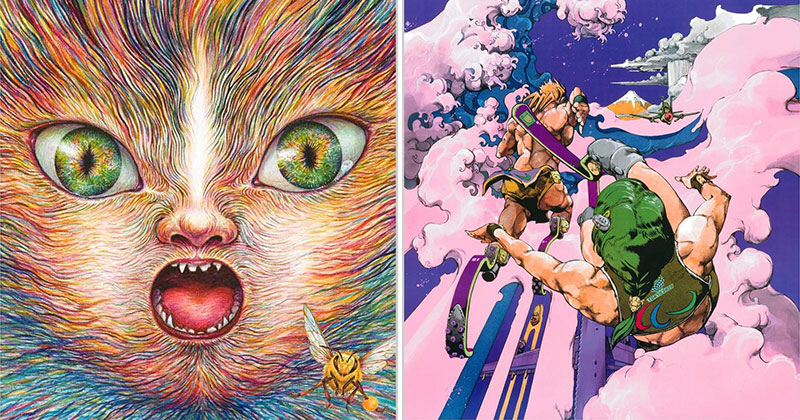 The 2020 Olympic Games in Tokyo are fast approaching and the official art posters for the games have just been unveiled and they’re awesome!

The organizing committee unveiled 20 official posters for both the Olympic and Paralympic Games. We have shared a selection of our personal favourites below and you can see all of the official art posters here. 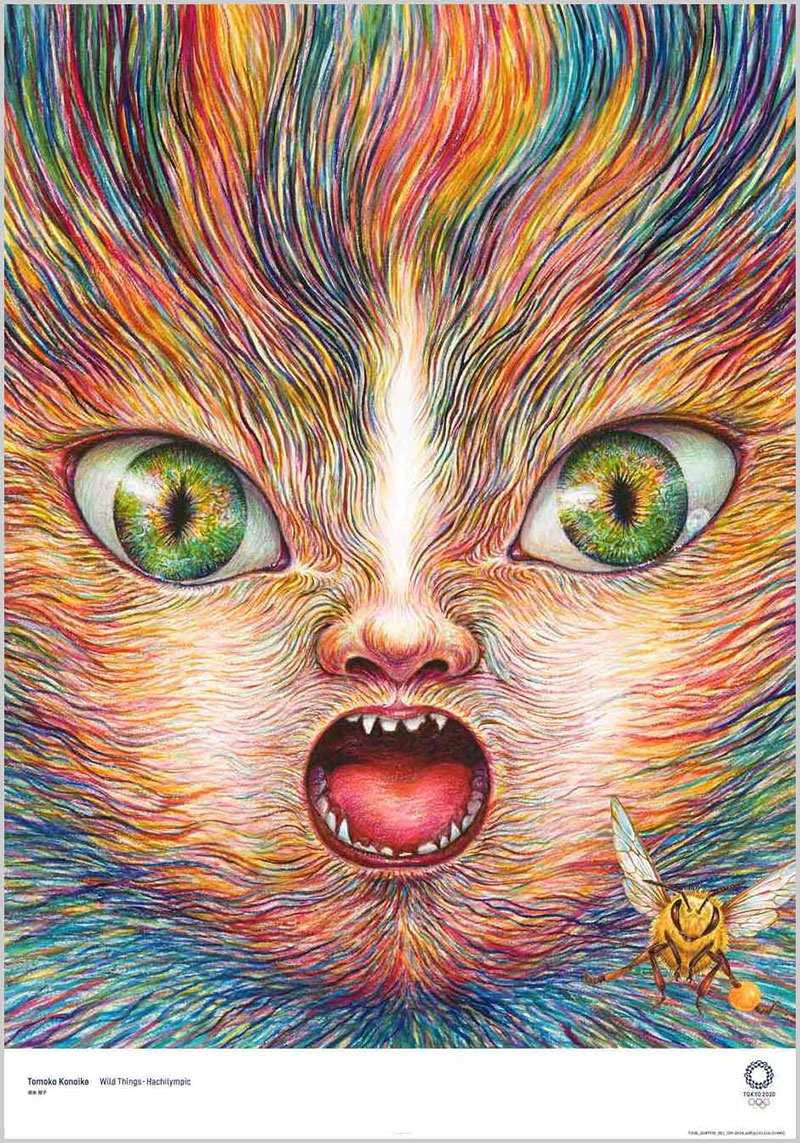 “As animals, each human being grasps the world with totally different perceptions. We see the world through our own umwelts. None are the same. No words are identical. No light is identical. lf the Olympic Games prepare themselves for that and address it honestly, then in time, a new ecosystem, filled with the senses, for a small organism, will begin to function.” – Artist, Tomoko Konoike 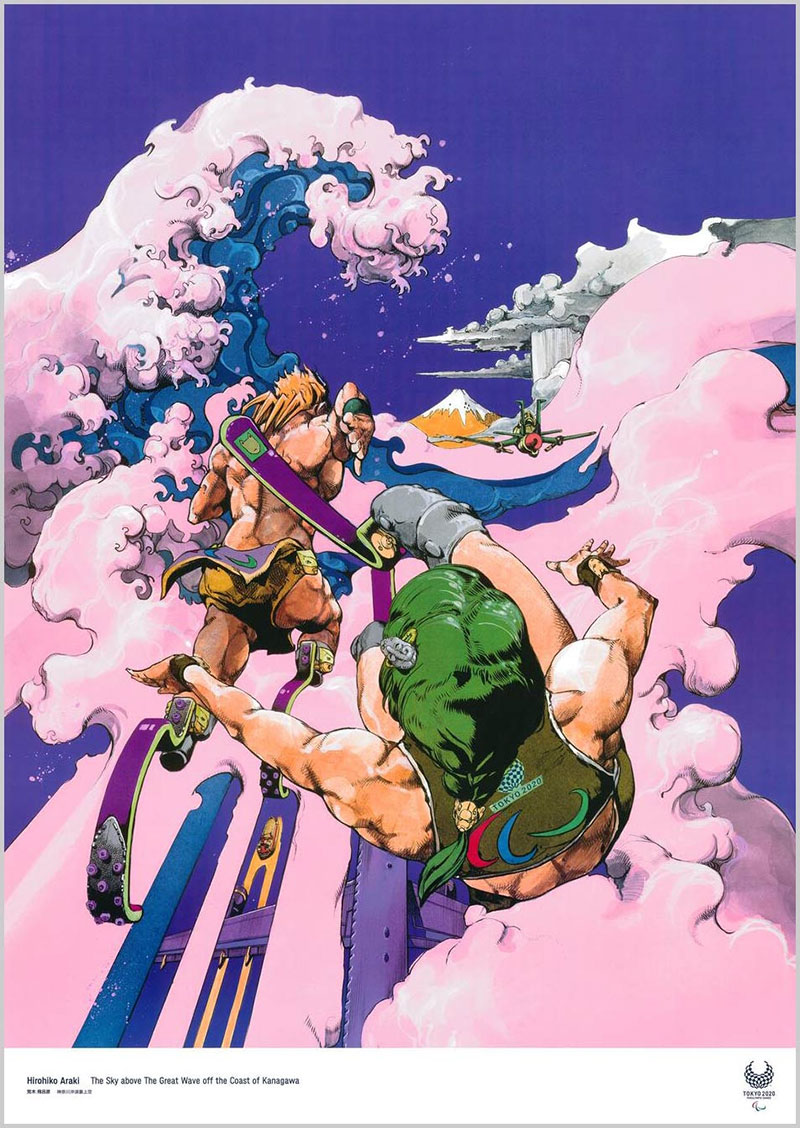 “I imagined the gods of sports descending on Japan from a sky filled with clouds resembling turbulent waves. The compositional motif was taken from Katsushika Hokusai’s print, The Great Wave off the Coast of Kanagawa. Deciding on the color of Mt. Fuji was difficult, but I finally settled on a honey color.” – Artist, Hirohiko Araki 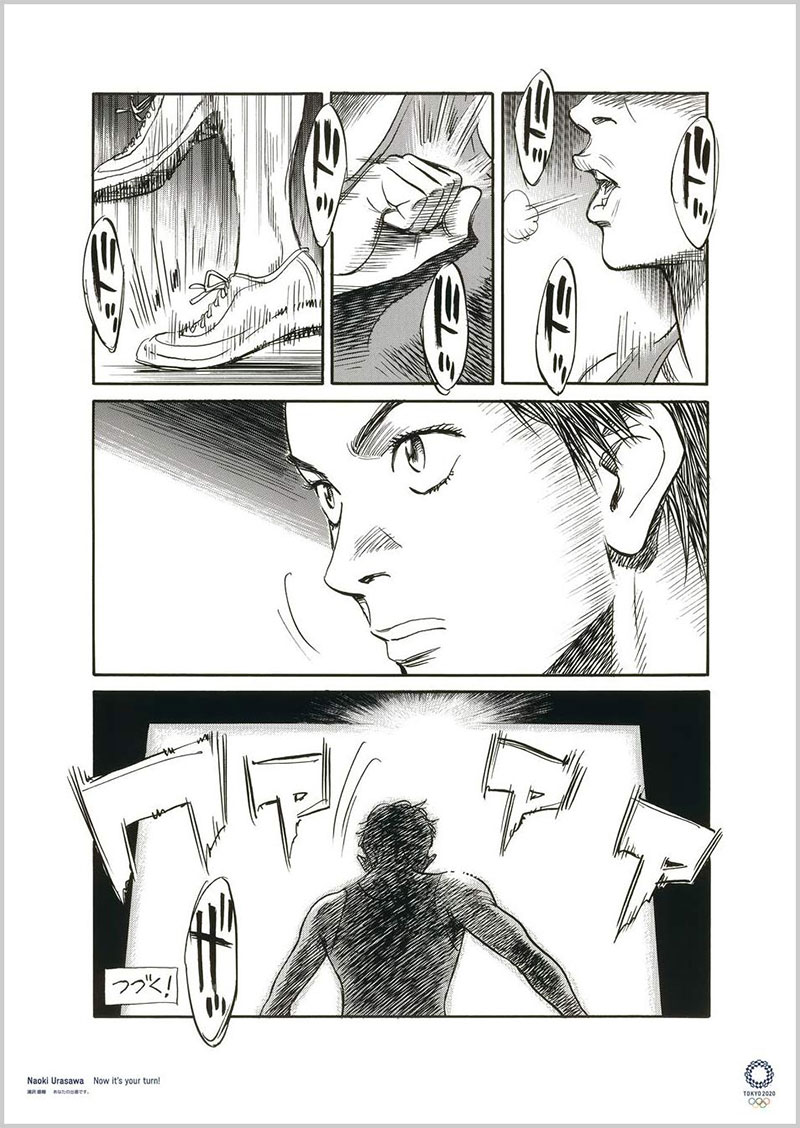 “Sports manga is a genre of manga almost unique to Japan. Sports manga played a significant role in the evolution and success of Japanese manga because the weekly serial comic was the perfect format for capturing the excitement of sporting events. Manga artists through the ages have committed their talent to conveying the thrill of heated matches and games. Concluding with the line, “To be continued!” each weekly episode has left readers on the edge of their seats, just like watching a real match. This is a new work created exclusively for the Olympic Games. It is my attempt at representations that transcend sporting events, race and gender. Everybody gets a turn. Now it’s your turn!” – Artist, Naoki Urasawa 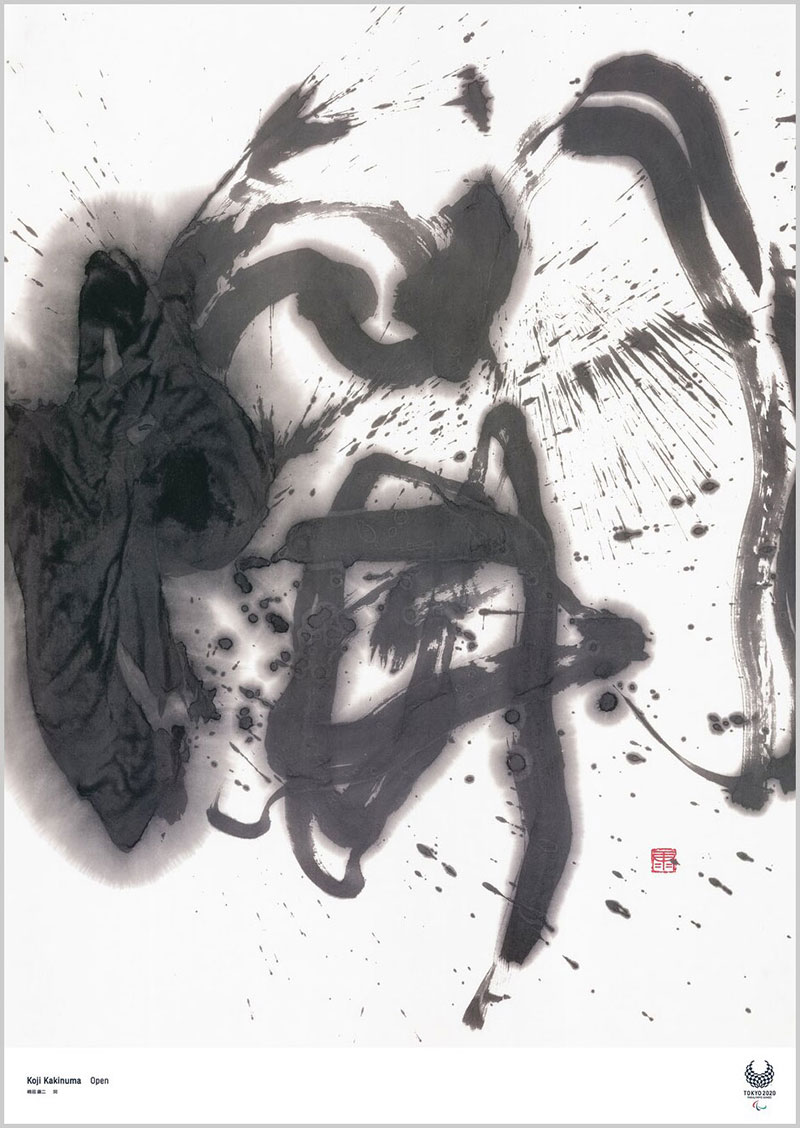 “Calligraphy has a history of over 3,000 years, and is a major pillar of Japanese culture and arts. I have continued to explore the history of calligraphy, and sought to create and exhibit works of calligraphy that are of our time. For my motif for the Tokyo 2020 Olympic and Paralympic Games Art Project, I chose the character “開” (“open”) out of tens of thousands of Chinese characters, and an infinite number of words.

‘Your entire body and soul open completely toward the universe. That is what I call an explosion.’ Underlying my work are the words artist Taro Okamoto chose to express his creative approach and philosophy. I imagined Olympic and Paralympic athletes working toward new heights every day, and told myself, “Open, open, open!” as I applied brush to paper until I felt myself to be completely “open.” I hope athletes and support staff gathering in Japan from around the world for this enormous festive event, as well as each and every one of us who is supporting the Games, will open our minds wide to our own possibilities, so that this celebration of peace can be carried on by future generations.” – Artist, Koji Kakinuma 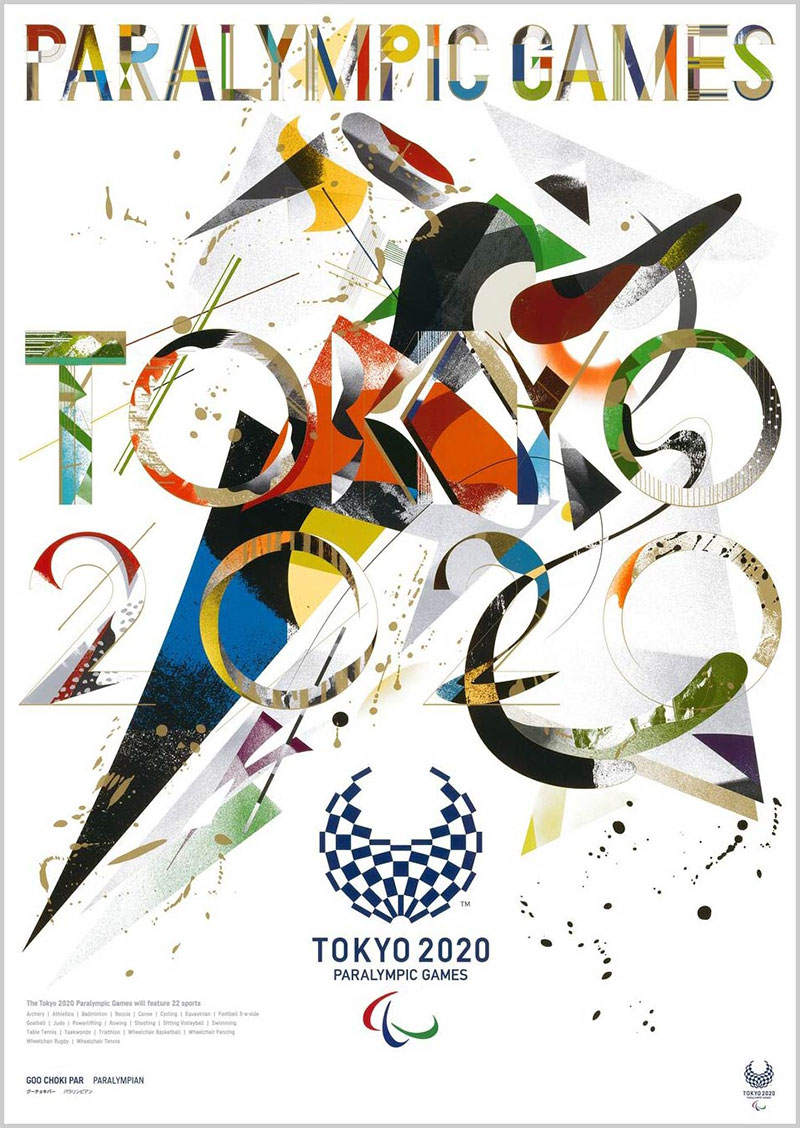 “Moving forward. Human aspiration for ceaseless progress removes physical limits, removes handicaps and leaps over the boundaries of nationalities and gender. Each life living in the present in 2020—I wanted to capture all of them, equally, in their beautiful and iconic shapes.

The work’s main motif is an individual who moves forward. Arms swinging boldly, feet hitting the ground with full force. This primitive embodiment of movement represents the determination of all Paralympians trying to move forward toward a surer future. The work pays homage to what each and every athlete has achieved, and to the history of human endeavor and progress.” – Graphic designer, GOO CHOKI PAR 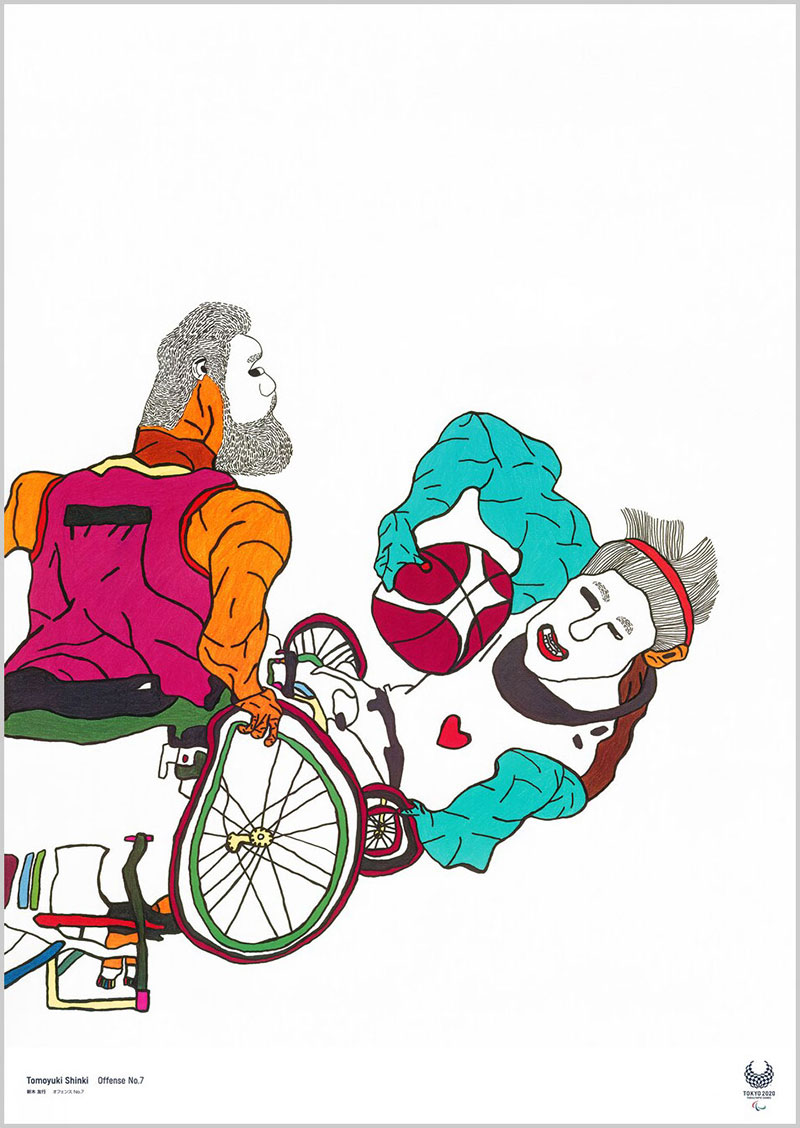 “Of the numerous sporting events, what should I choose as my subject matter? I decided on wheelchair basketball because I have watched various matches live, which resonated with me. The full-on engagement of players and their tremendous speed and strength makes the games extremely heated. I chose bright, uplifting colors. The crowd is totally enthralled by the passionate matches. Players are giving it their all. I tried to capture that energy using bright colors. I sincerely hope viewers, whether they are feeling cheerful or down, will be inspired and encouraged by the courage of the athletes, and by the appeal and compelling power of para sports.” – Artist, Tomoyuki Shinki 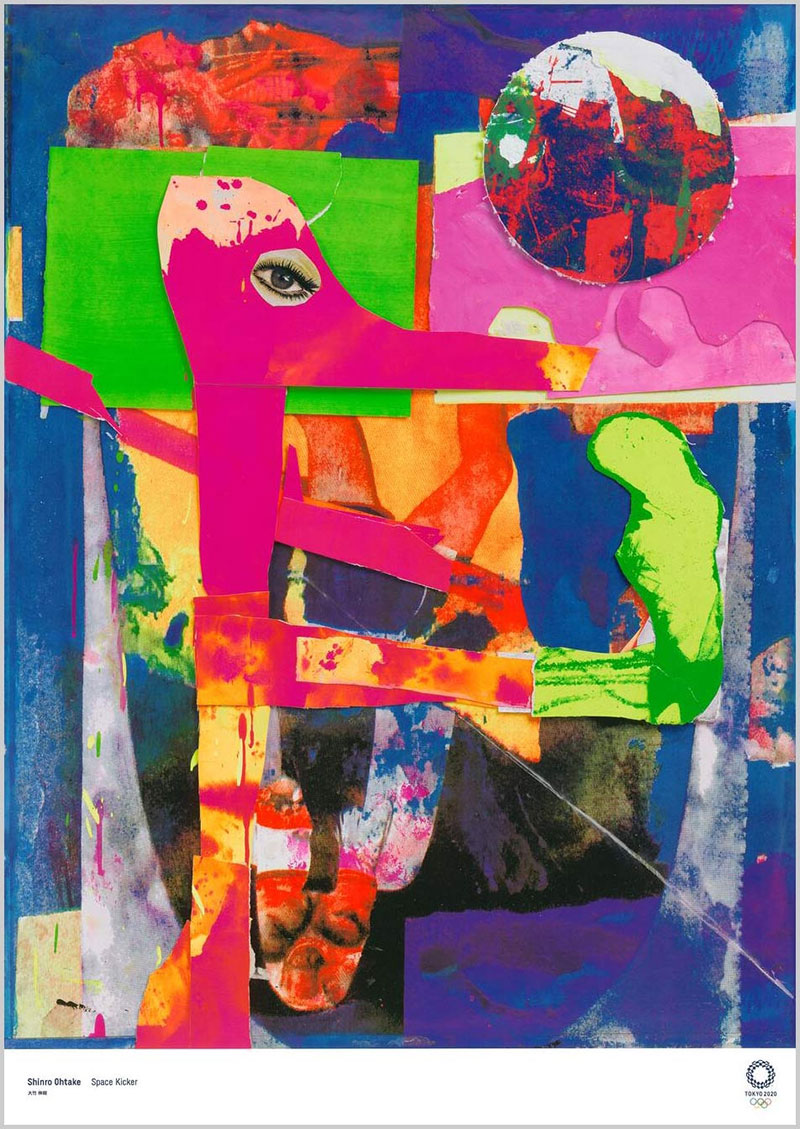 “Multicolored spherical celestial bodies hurtling through space at the speed of light. Never-to-be-repeated chance encounters of vivid, sparkling colors and heavenly beings—I was imagining an Olympic scene far removed from Earth. A pink figure appears out of nowhere. Without so much as a blink, the figure nonchalantly does kick-ups with a bright red ball. Is this the “god of games”? When Tokyo hosted the Olympic Games back in 1964, I was at elementary school, where we did papercutting in class. So I decided to create my imagined universe in papercutting. I cut out unfinished artwork and, along with scraps of printed matter and random bits of colored paper found in the studio, threw it in the air. And the “Space Kicker” spontaneously appeared where the multicolored fragments had landed.” – Artist, Shinro Ohtake 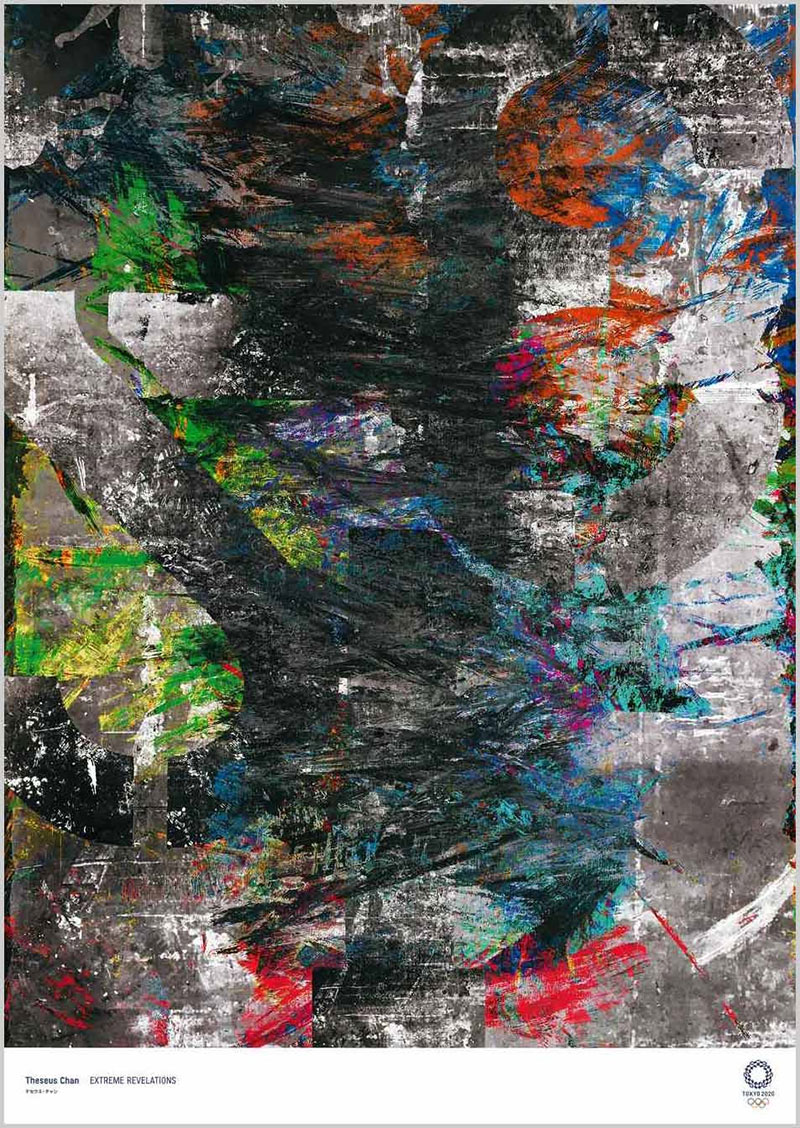 “It is unthinkable till now that skateboarding has become an Olympic sport as it seems contrary to its rebellious culture. Skateboarding has a language of its own and being a relatively new sport it is continually evolving and is a synthesis of art, design, fashion, music, and even having gestures of its own. There are three layers to this piece of work.

Firstly, Extreme Revelation conceived out of rebellious thinking. Skateboarding grind marks subverted to like brush strokes. Crisscrossing, working and reworking in the pursuit of articulation in perfection. Secondly, the cumulative layers of concrete, metallic, materials often associated with the sport represents the uncertainty, darkness and oppression. Yet, the extremely bright colours bursting forth from within celebrates youthfulness and brazen spirit which cannot be repress. Thirdly, the cryptic inversion of the numerals and figurative graphic which are almost invisible, question if there are merits in the established order.” – Artist, Theseus Chan 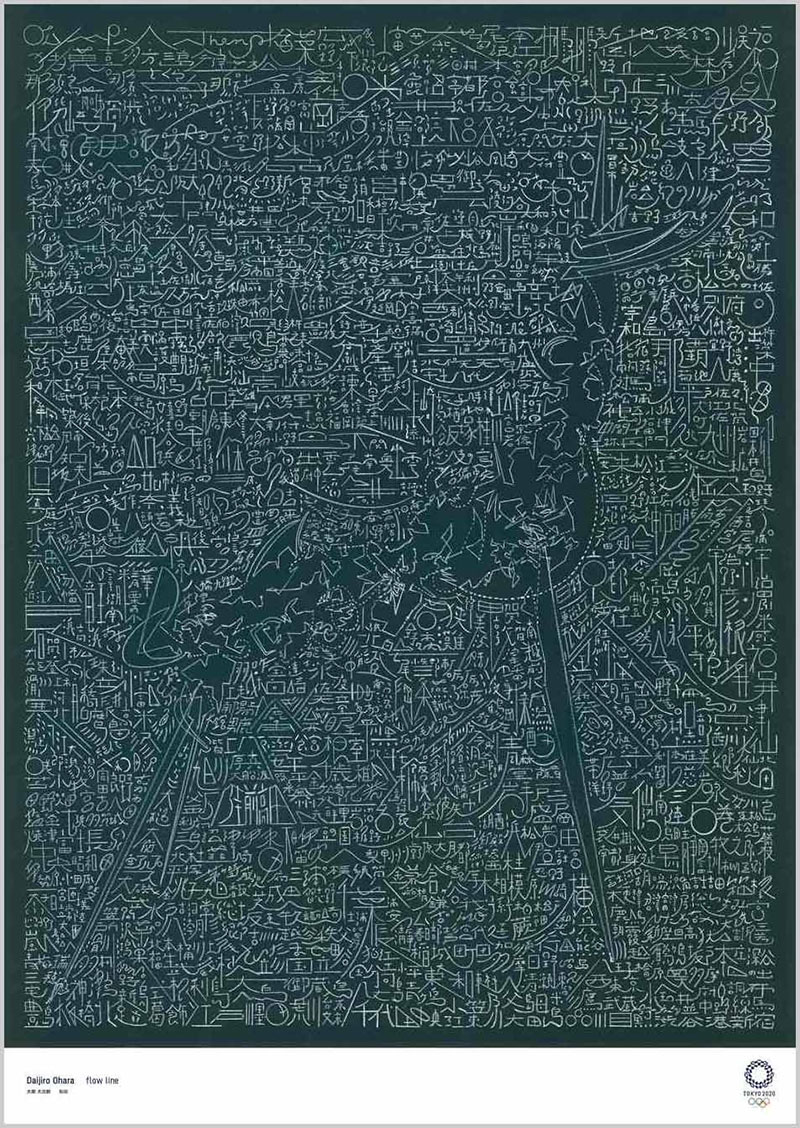 “Numerous lines intersect in this world: Lines of vision; parabola; boundaries; threads of narrative foreshadowing; and many more. At times becoming entangled with one another and at times coming loose, these countless lines form images in space, and in our minds and bodies. This work represents the anticipated line of movement of the Olympic flame from Greece to Tokyo for the 2020 Games, and the more than 800 municipalities on the course of the torch relay in Japan. What could possibly link an individual with an event in which world-class athletes compete? It is not easy to grasp what does connect a huge-scale event with an individual—such connections can be erratic, or elusive. Even in a diverse world full of confusing tangles of such difficult-to-define lines, I wish to maintain hope in the fact that the world has artworks that touch our hearts, and has places where our bodies can bask in excitement.” – Graphic designer, Daijiro Ohara 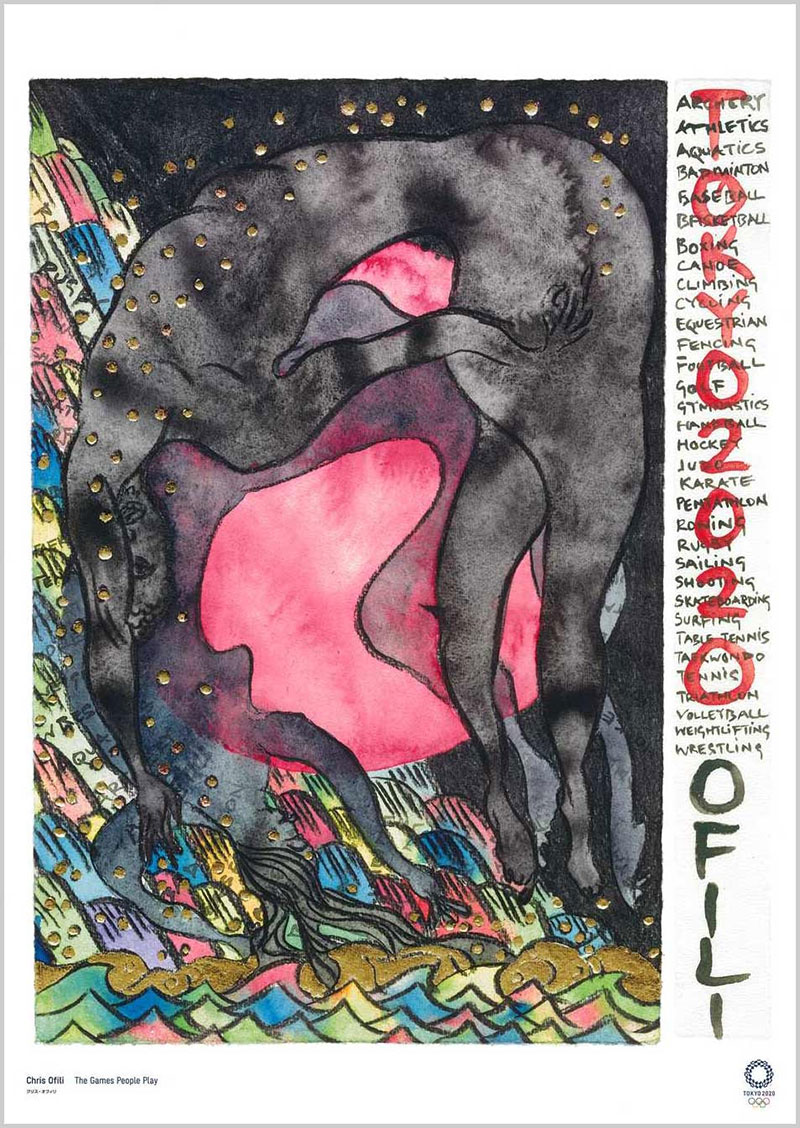 “The artwork I have produced for the Tokyo 2020 Olympic Games presents the image of a high jumper, arching in front of the red circle of the sun. The artist is performing a universal leap as signified in the achievements of the Olympic Games. The high jumper is employing the high jump technique popularized by the pioneering American athlete Dick Fosbury, the Fosbury Flop, showing the figure leaning into the jump, his body in rotation. A diaphanous female figure is visible, emerging from behind. In the vertical banner to the right of the image, the 33 sports that will feature in the Tokyo 2020 Olympic Games are listed, and the names of the sports are just discernible again in the colourful waterfall behind the leading outstretched arm of the jumper.” – Artist, Chris Ofili 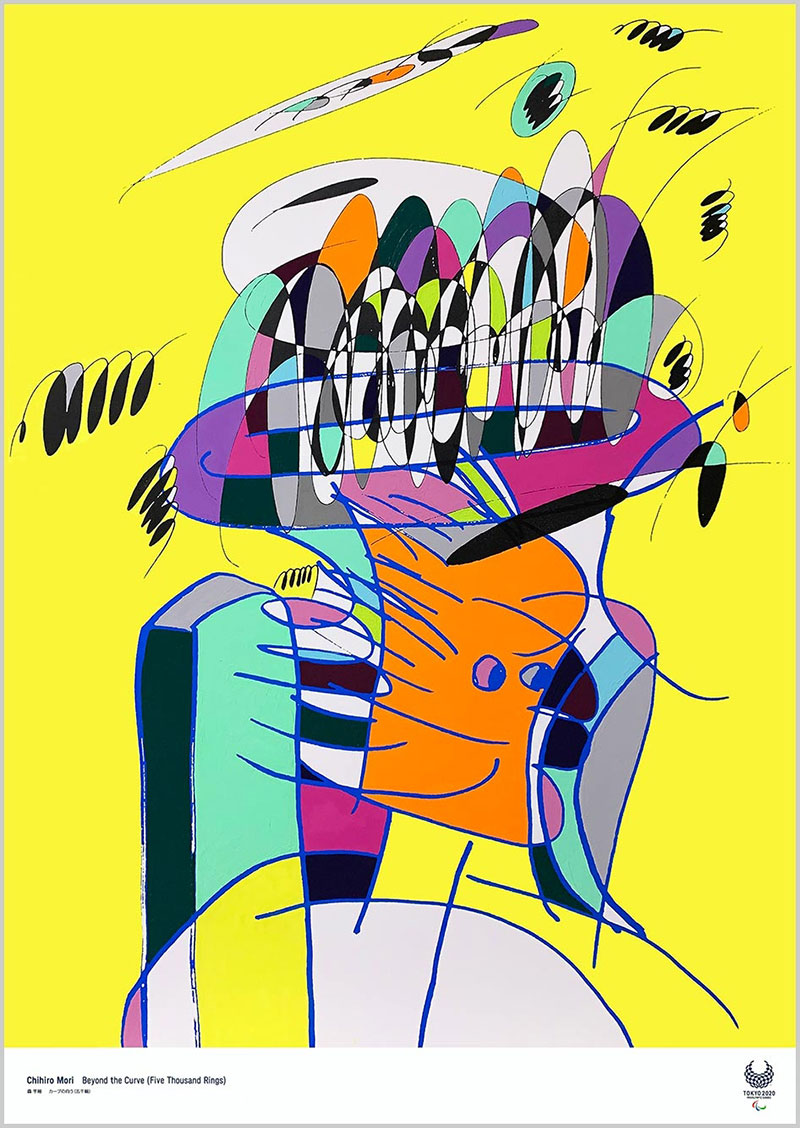 “Beyond the Curve (Five Thousand Rings)
High rises that look like bar charts
Junctions that look like intestines
Streets that feel like gingivae underneath your feet
Behind the birth of a new “Ultra C”
I give the cerebellum a prod with a brain spatula
Colorful mud
Heated bones and gusts around tall buildings
Springs made of air
Transparent curves”
– Artist, Chihiro Mori 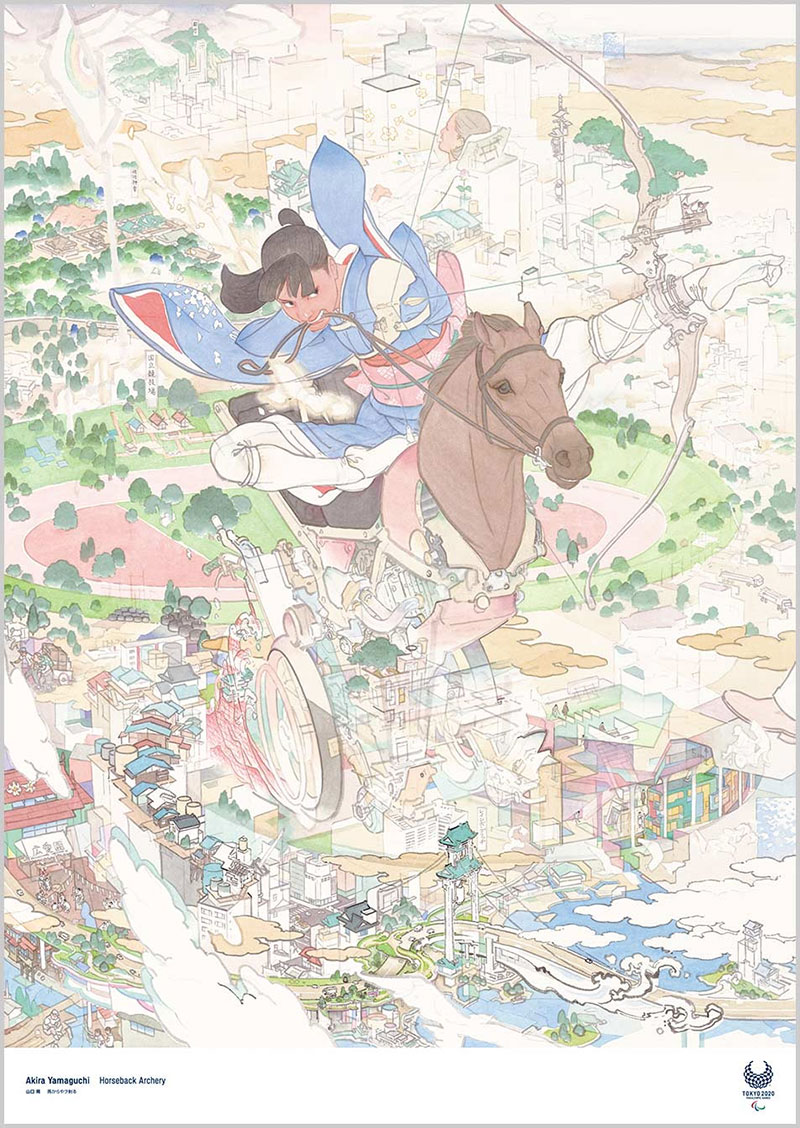