The Death of a Star: Tycho Supernova 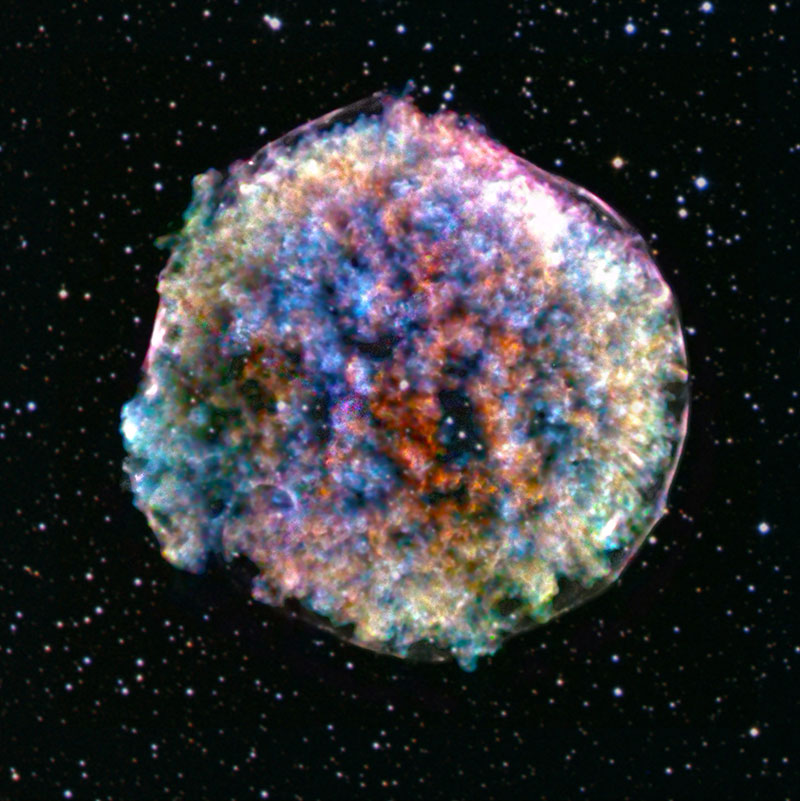 In 1572, Danish astronomer Tycho Brahe was among those who noticed a new bright object in the constellation Cassiopeia. Adding fuel to the intellectual fire that Copernicus started, Tycho showed this “new star” was far beyond the Moon, and that it was possible for the universe beyond the Sun and planets to change.

Astronomers now know that Tycho’s new star was not new at all. Rather it signaled the death of a star in a supernova, an explosion so bright that it can outshine the light from an entire galaxy. This particular supernova was a Type Ia, which occurs when a white dwarf star pulls material from, or merges with, a nearby companion star until a violent explosion is triggered. The white dwarf star is obliterated, sending its debris hurtling into space.

In its two decades of operation, NASA’s Chandra X-ray Observatory has captured unparalleled X-ray images of many supernova remnants.

Chandra reveals an intriguing pattern of bright clumps and fainter areas in Tycho. What caused this thicket of knots in the aftermath of this explosion? Did the explosion itself cause this clumpiness, or was it something that happened afterward?

This latest image of Tycho from Chandra is providing clues. To emphasize the clumps in the image and the three-dimensional nature of Tycho, scientists selected two narrow ranges of X-ray energies to isolate material (silicon, colored red) moving away from Earth, and moving towards us (also silicon, colored blue). The other colors in the image (yellow, green, blue-green, orange and purple) show a broad range of different energies and elements, and a mixture of directions of motion. In this new composite image, Chandra’s X-ray data have been combined with an optical image of the stars in the same field of view from the Digitized Sky Survey.

via NASA Image of the Day