A Completely Hollowed Out 19th Century Building from Above 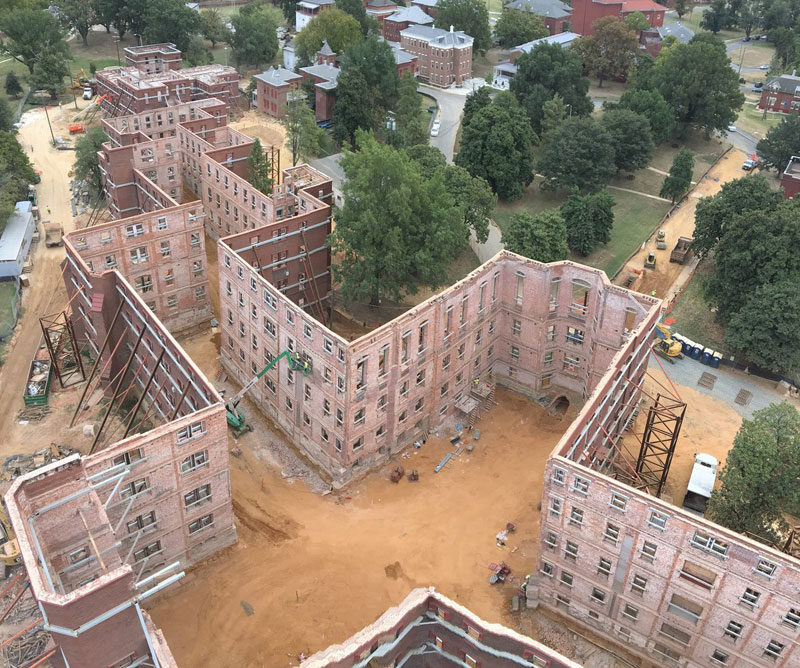 Seen here is the completely hollowed out St. Elizabeths Hospital (Center Building) from above. First opened in 1855, JMA Preservation is working with Shalom Baranes Associates (SBA) on the restoration of the National Historic Landmark Center Building at St. Elizabeths Hospital in Southeast, Washington, DC. [source] For those interested, this type of historic restoration is known as facadism.

According to MTFA Architecture:

The building was the first Federal psychiatric hospital in the country, with patients arriving beginning in 1855. At its inception, the complex was known as the Government Hospital for the insane. It was constructed in multiple phases following an echelon plan designed by Thomas Story Kirkbride with the ardent support of mental health advocate Dorothea Dix and architect Thomas Ustick Walter, concurrently the Architect of the Capitol. The exterior of the Center Building is firmly set in the Gothic Revival style and is owned by the General Services Administration (GSA).

The building is to become the new headquarters for the Department of Homeland Security. While the exterior core will be restored, the interior is being reconfigured and the historic cruciform section of the building is to be reconstructed. JMA Preservation is responsible for the restoration of the remaining historic materials including the brick, sandstone, and cast iron on the exterior walls. JMA Preservation conducted a thorough paint analysis of the windows, wood trim, and plaster in the cruciform section prior to demolition to inform GSA and SBA with guidelines for reconstructing the interior finishes. JMA Preservation has contributed to final construction documents, specifications, and construction administration for this complex restoration project. [source]