After Two Decades in Space, Cassini is About to Crash Into Saturn. These are the Final Images 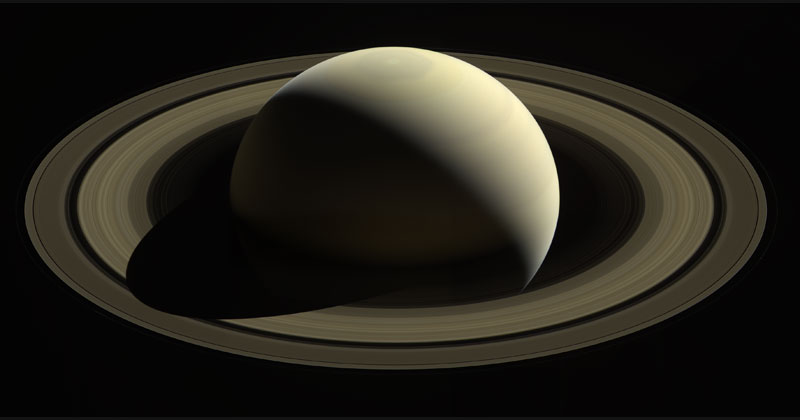 After two decades in space, NASA’s Cassini spacecraft is nearing the end of its remarkable journey of exploration. Having expended almost every bit of the rocket propellant it carried to Saturn, operators are deliberately plunging Cassini into the planet to ensure Saturn’s moons will remain pristine for future exploration—in particular, the ice-covered, ocean-bearing moon Enceladus, but also Titan, with its intriguing pre-biotic chemistry.

On Sept. 15, 2017, the spacecraft will make its final approach to the giant planet Saturn. Cassini will dive into the planet’s atmosphere, sending science data for as long as its small thrusters can keep the spacecraft’s antenna pointed at Earth. Soon after, Cassini will burn up and disintegrate like a meteor.

Cassini by the Numbers 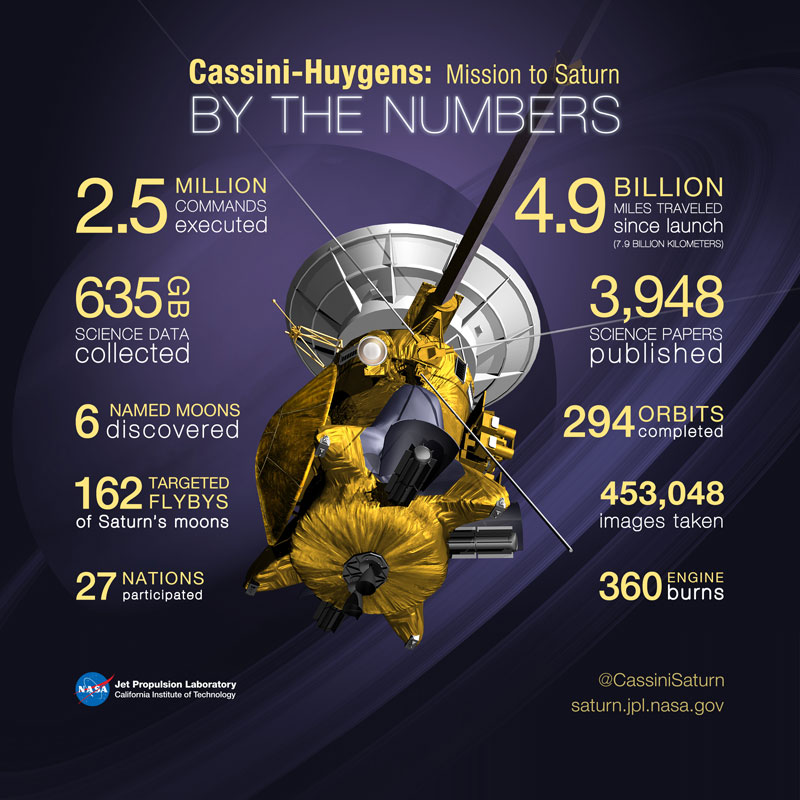 Every week, Cassini has been diving through the approximately 1,200-mile-wide (2,000-kilometer-wide) gap between Saturn and its rings. No other spacecraft has ever explored this unique region.

Cassini’s final images will have been sent to Earth several hours before its final plunge, but even as the spacecraft makes its fateful dive into the planet’s atmosphere, it will be sending home new data in real time. Key measurements will come from its mass spectrometer, which will sample Saturn’s atmosphere, telling us about its composition until contact is lost.

Below you will find some incredible images Cassini has recently taken. The current predicted time for loss of signal on Earth is 4:55 a.m. PDT (7:55 a.m. EDT) on Sept. 15, 2017. For more information visit the Official Mission Website 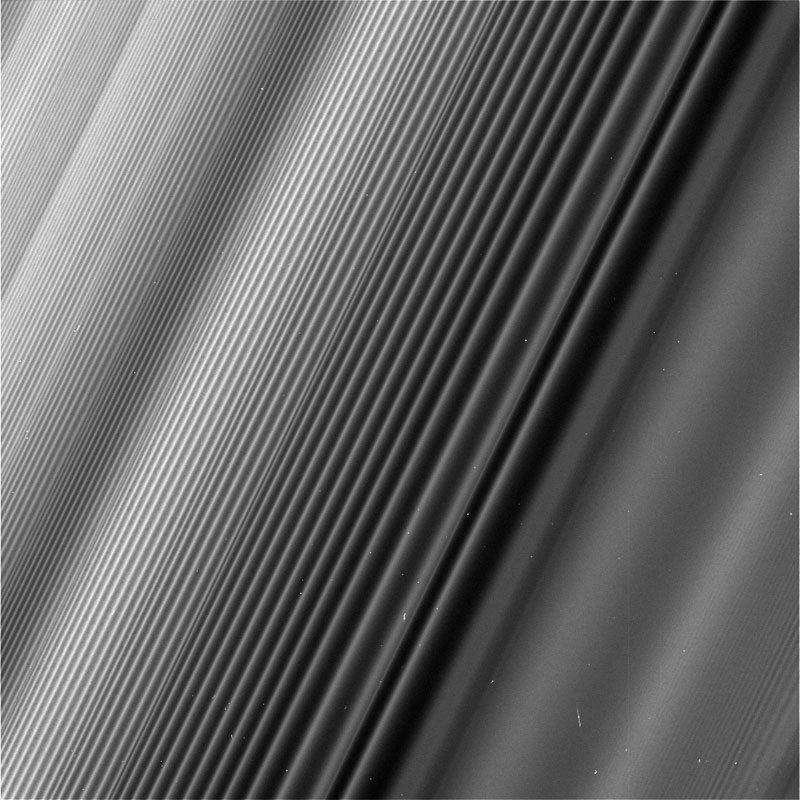 Photograph by NASA/JPL-Caltech/Space Science Institute
[June 4, 2017] This view from NASA’s Cassini spacecraft shows a wave structure in Saturn’s rings known as the Janus 2:1 spiral density wave. Resulting from the same process that creates spiral galaxies, spiral density waves in Saturn’s rings are much more tightly wound. In this case, every second wave crest is actually the same spiral arm which has encircled the entire planet multiple times.

This wave is remarkable because Janus, the moon that generates it, is in a strange orbital configuration. Janus and Epimetheus (see “Cruising Past Janus”) share practically the same orbit and trade places every four years. Every time one of those orbit swaps takes place, the ring at this location responds, spawning a new crest in the wave. The distance between any pair of crests corresponds to four years’ worth of the wave propagating downstream from the resonance, which means the wave seen here encodes many decades’ worth of the orbital history of Janus and Epimetheus. 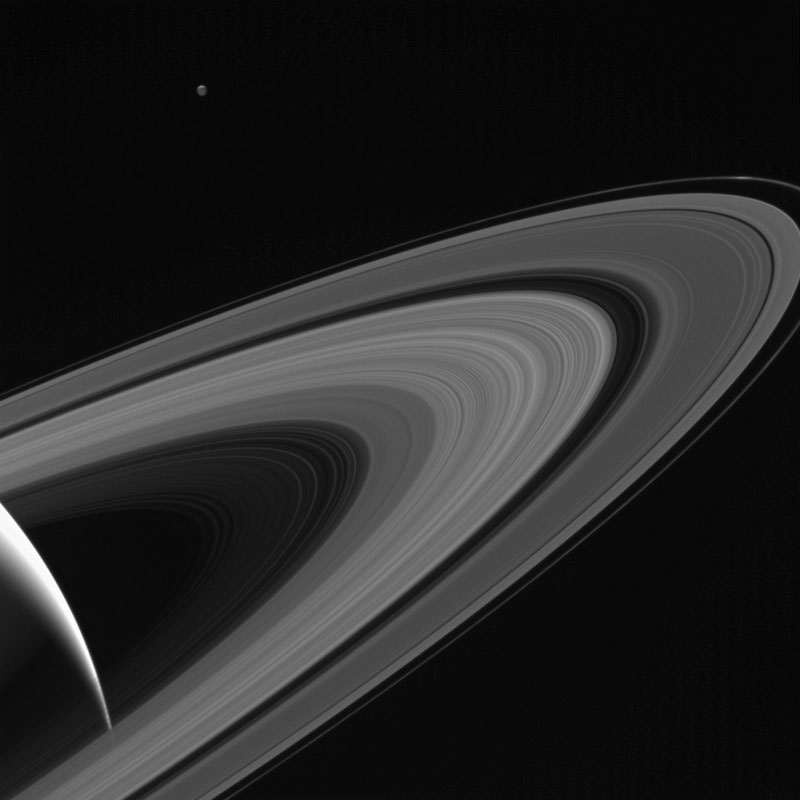 Cassini gazes across the icy rings of Saturn toward the icy moon Tethys, whose night side is illuminated by Saturnshine, or sunlight reflected by the planet. This view looks toward the sunlit side of the rings from about 10 degrees above the ring plane. The image was taken in visible light with the Cassini spacecraft wide-angle camera on May 13, 2017.

The view was acquired at a distance of approximately 750,000 miles (1.2 million kilometers) from Saturn and at a Sun-Saturn-spacecraft, or phase, angle of 140 degrees. 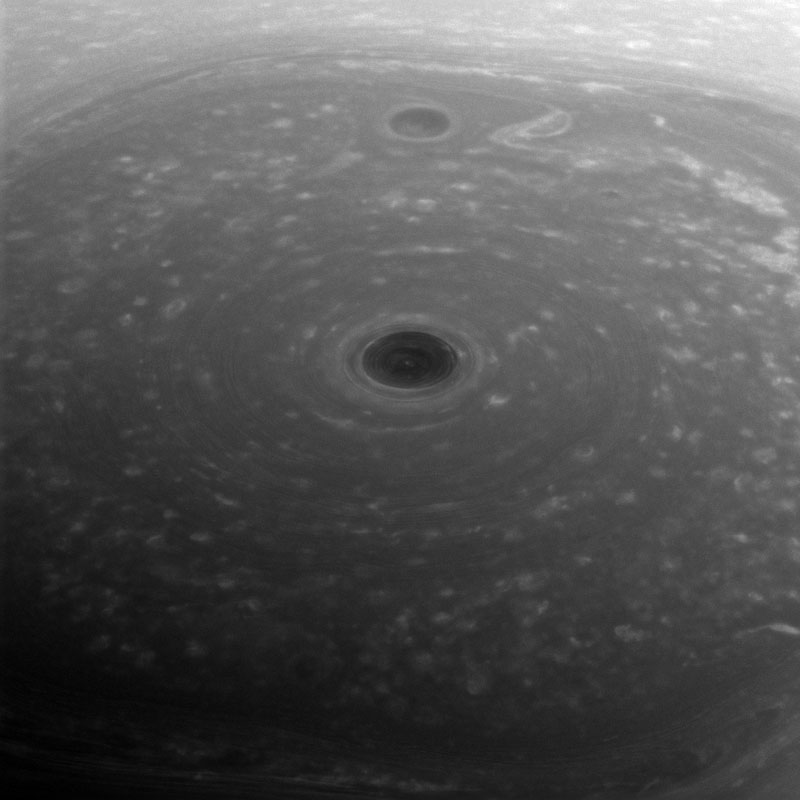 These turbulent clouds are on top of the world at Saturn. NASA’s Cassini spacecraft captured this view of Saturn’s north pole on April 26, 2017 — the day it began its Grand Finale — as it approached the planet for its first daring dive through the gap between the planet and its rings. The view was obtained at a distance of approximately 166,000 miles (267,000 kilometers) from Saturn.

Although the pole is still bathed in sunlight at present, northern summer solstice on Saturn occurred on May 24, 2017, bringing the maximum solar illumination to the north polar region. Now the Sun begins its slow descent in the northern sky, which eventually will plunge the north pole into Earth-years of darkness. Cassini’s long mission at Saturn enabled the spacecraft to see the Sun rise over the north, revealing that region in great detail for the first time. 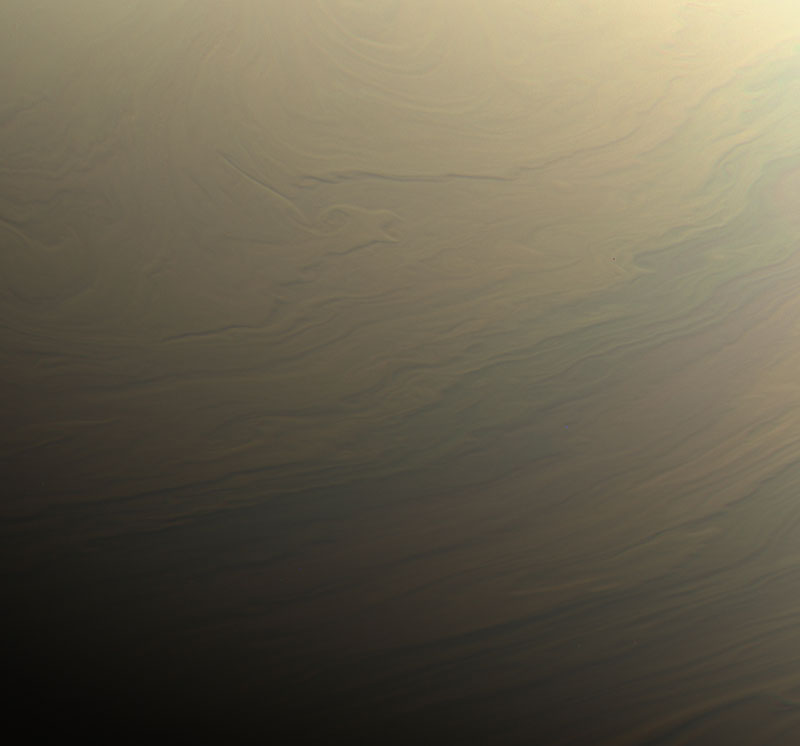 NASA’s Cassini spacecraft gazed toward the northern hemisphere of Saturn to spy subtle, multi-hued bands in the clouds there. The images were acquired on Aug. 31, 2017, at a distance of approximately 700,000 miles (1.1 million kilometers) from Saturn.

This view looks toward the terminator — the dividing line between night and day — at lower left. The sun shines at low angles along this boundary, in places highlighting vertical structure in the clouds. Some vertical relief is apparent in this view, with higher clouds casting shadows over those at lower altitude. 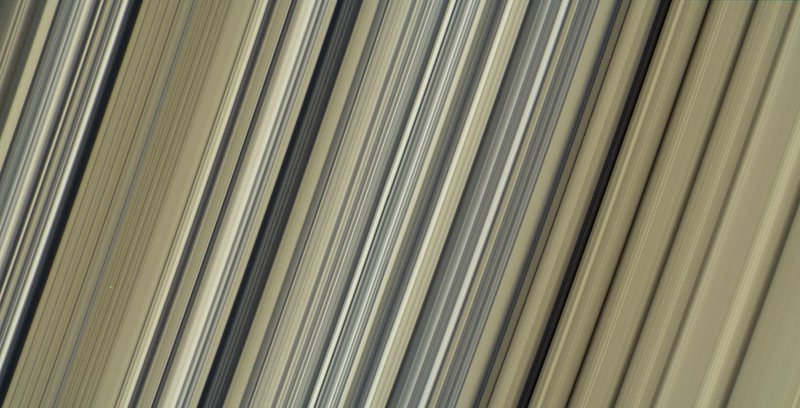 These are the highest-resolution color images of any part of Saturn’s rings, to date, showing a portion of the inner-central part of the planet’s B Ring. The view is a mosaic of two images that show a region that lies between 61,300 and 65,600 miles (98,600 and 105,500 kilometers) from Saturn’s center.

The material responsible for bestowing this color on the rings—which are mostly water ice and would otherwise appear white—is a matter of intense debate among ring scientists that will hopefully be settled by new in-situ observations before the end of Cassini’s mission.

The different ringlets seen here are part of what is called the “irregular structure” of the B ring. The narrow ringlets in the middle of this scene are each about 25 miles (40 kilometers) wide, and the broader bands at right are about 200 to 300 miles (300 to 500 kilometers) across. It remains unclear exactly what causes the variable brightness of these ringlets and bands

This image was taken on July 6, 2017, with the Cassini spacecraft narrow-angle camera. The image was acquired on the sunlit side of the rings from a distance of 47,000 miles (76,000 kilometers) away from the area pictured. 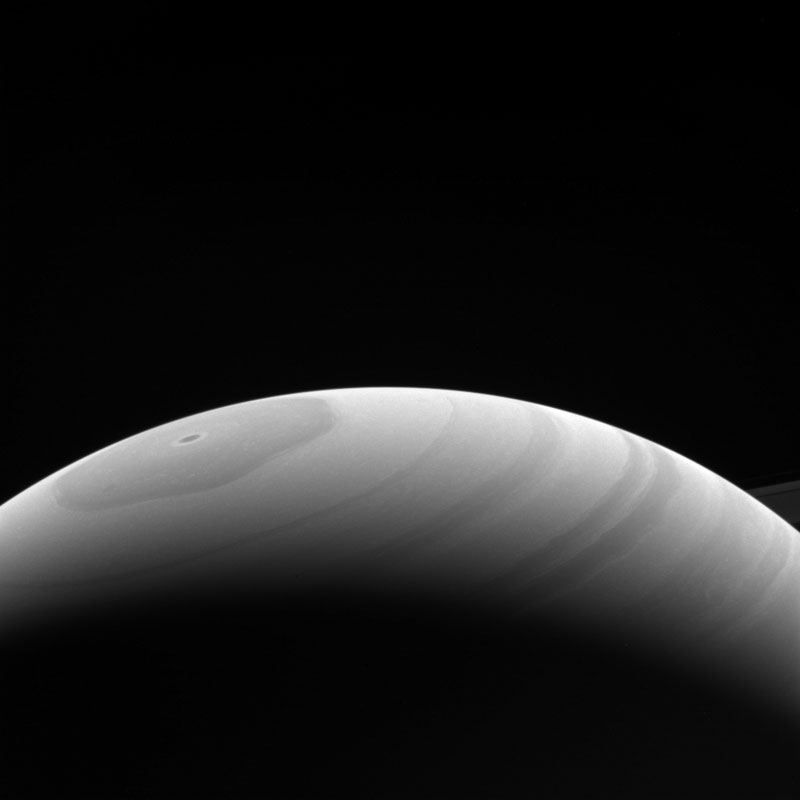 Saturn’s northern hemisphere reached its summer solstice in mid-2017, bringing continuous sunshine to the planet’s far north. The solstice took place on May 24, 2017. The Cassini mission is using the unparalleled opportunity to observe changes that occur on the planet as the Saturnian seasons turn.

This view looks toward the sunlit side of the rings from about 17 degrees above the ring plane. The image was taken with the Cassini spacecraft wide-angle camera on April 17, 2017 using a spectral filter which preferentially admits wavelengths of near-infrared light centered at 939 nanometers. The view was acquired at a distance of approximately 733,000 miles (1.2 million kilometers) from Saturn. Image scale is 44 miles (70 kilometers) per pixel.

7. Prometheus and the Ghostly F Ring 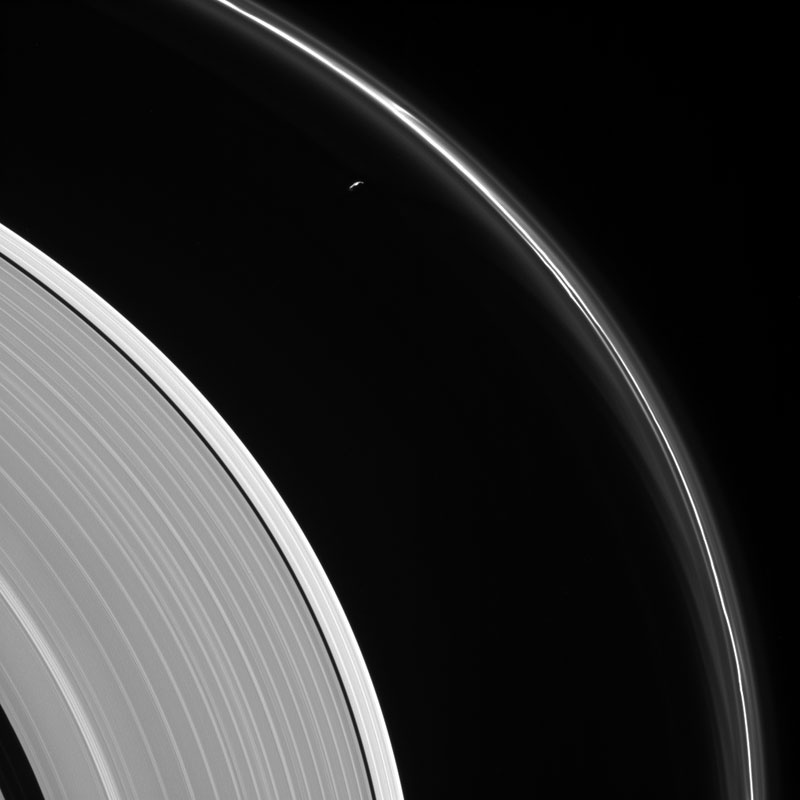 The thin sliver of Saturn’s moon Prometheus lurks near ghostly structures in Saturn’s narrow F ring in this view from NASA’s Cassini spacecraft. Many of the narrow ring’s faint and wispy features result from its gravitational interactions with Prometheus (86 kilometers, or 53 miles across).

Most of the small moon’s surface is in darkness due to the viewing geometry here. Cassini was positioned behind Saturn and Prometheus with respect to the sun, looking toward the moon’s dark side and just a bit of the moon’s sunlit northern hemisphere.

The image was taken in visible light with the Cassini spacecraft narrow-angle camera on May 13, 2017. The view was acquired at a distance of approximately 680,000 miles (1.1 million kilometers) from Saturn. Image scale is 4 miles (6 kilometers) per pixel.

8. Jets from a Distance 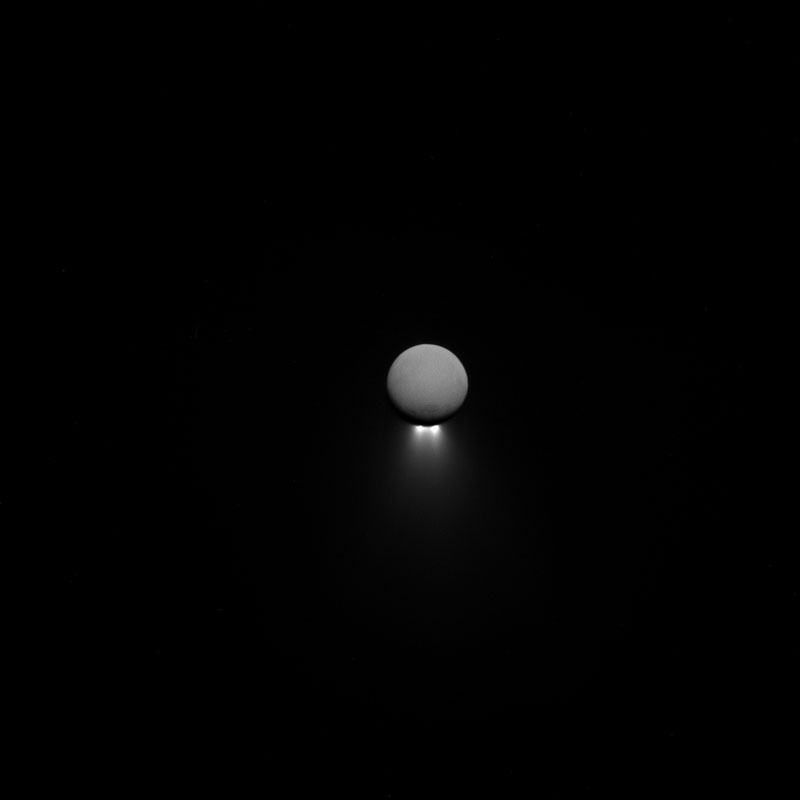 Enceladus’ intriguing south-polar jets are viewed from afar, backlit by sunlight while the moon itself glows softly in reflected Saturn-shine. Observations of the jets taken from various viewing geometries provide different insights into these remarkable features. Cassini has gathered a wealth of information in the hopes of unraveling the mysteries of the subsurface ocean that lurks beneath the moon’s icy crust.

The image was taken in visible light with the Cassini spacecraft narrow-angle camera on April 13, 2017. The view was acquired at a distance of approximately 502,000 miles (808,000 kilometers) from Enceladus and at a sun-Enceladus-spacecraft, or phase, angle of 176 degrees.

With this view, Cassini captured one of its last looks at Saturn and its main rings from a distance. The Saturn system has been Cassini’s home for 13 years, but that journey is nearing its end.

When the spacecraft arrived at Saturn in 2004, the planet’s northern hemisphere, seen here at top, was in darkness, just beginning to emerge from winter. Now at journey’s end, the entire north pole is bathed in the continuous sunlight of summer.

Images taken on Oct. 28, 2016 with the wide angle camera using red, green and blue spectral filters were combined to create this color view. The view was acquired at a distance of approximately 870,000 miles (1.4 million kilometers) from Saturn.

To its very end, Cassini is a mission of thrilling exploration. Launched on Oct. 15, 1997, the mission entered orbit around Saturn on June 30, 2004 (PDT), carrying the European Huygens probe. After its four-year prime mission, Cassini’s tour was extended twice. Its key discoveries have included the global ocean with indications of hydrothermal activity within Enceladus, and liquid methane seas on Titan.

While it’s always sad when a mission comes to an end, Cassini’s finale plunge is a truly spectacular end for one of the most scientifically rich voyages yet undertaken in our solar system. From its launch in 1997 to the unique Grand Finale science of 2017, the Cassini-Huygens mission has racked up a remarkable list of achievements.