After paying for the rights to be the first private SpaceX customer to fly around the moon, Japanese billionaire Yusaku Maezawa has announced his #dearMoon project which seeks to invite 6-8 artists from around the world to join him on his mission in hopes of inspiring them.

The 42-year-old entrepreneur and renowned art collector is the founder of Zozotown, the largest online clothing retailer in Japan. Maezawa plans to fly as early as 2023 aboard SpaceX’s Big Falcon Rocket (BFR).

While the trip will be free for the artists Maezawa chooses to bring with him, Musk has stated that Maezawa paid a ‘significant’ sum for this rare opportunity. Check out the promo video for #dearMoon below that was just released.

I choose to go to the Moon, with artists.

I hope that this project will inspire the dreamer within each of us.

Together with Earth’s top artists, I will be heading to the moon… just a little earlier than everyone else.

I am truly blessed by this opportunity to become Host Curator of “#dearMoon”.

I would like to thank Elon Musk and SpaceX for creating the opportunity to go around the moon in their BFR. I would also like to thank all those who have continuously supported me.

I vouch to make this project a success. Stay tuned! 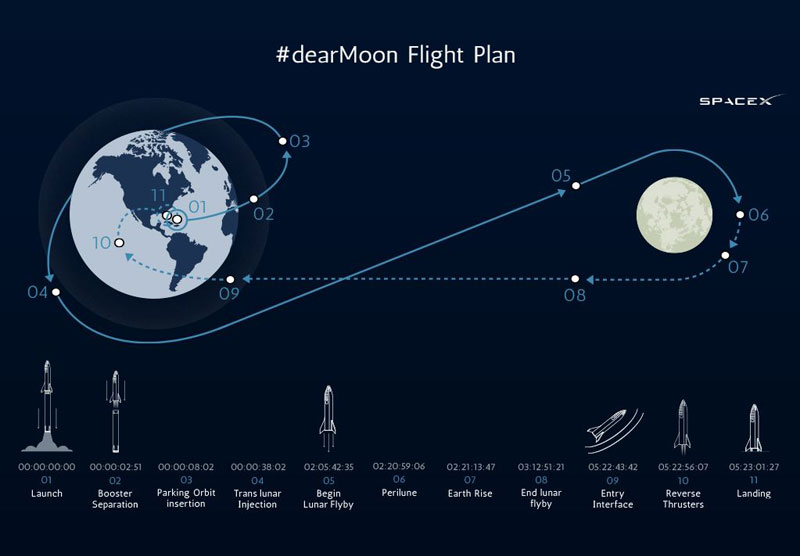 Musk estimates the development cost of the BFR at approximately $5 billion. Maezawa, who is also an avid art collector, spent $110.5 million on a 1982 painting by Jean-Michel Basquiat called Untitled just last year.

In May 2016, Maezawa attracted significant media attention with a then record purchase price at auction of $57.3 million for another untitled work by Jean-Michel Basquiat. At the same 2016 auction, Maezawa bought pieces by Bruce Nauman, Alexander Calder, Richard Prince, and Jeff Koons, spending a total of $98 million over two days. Maezawa plans to open a contemporary art museum in Chiba, which will house his collection.