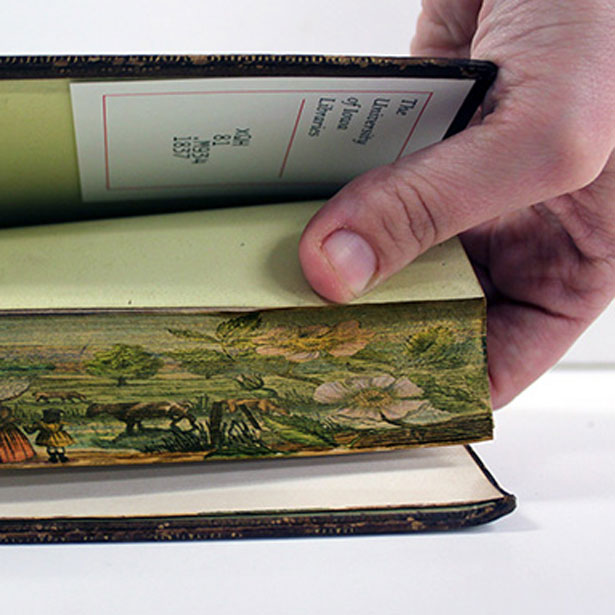 According to Encyclopedia Britannica, fore-edge paintings first arose during the European Middle Ages but came to prominence during the mid-17th century to the late 19th century. Anne C. Bromer for the Boston Public Library writes, “Most fore-edge painters working for binding firms did not sign their work, which explains why it is difficult to pinpoint and date the hidden paintings.”

Thanks to the generous gifts from Anne and David Bromer and Albert H. Wiggin, the Boston Public Library holds one of the finest collections of fore-edge paintings in the United States. Most of the collection has been put online for the world to enjoy and features more than 200 high-resolution images; complete with additional videos, articles and information.

The University of Iowa and Colossal recently featured a few fore-edge paintings with animated gifs that can also be seen below.

1. The causes, appearances, and effects of the
seasonal decay and decomposition of nature, 1837 by Robert Mudie

4. Analysis of the Game of Chess, 1790
by François-André Danican Philidor

11. The causes, appearances, and effects of the
seasonal decay and decomposition of nature, 1837 by Robert Mudie

12. The poetical works of Thomas Moore, 1865
by Thomas Moore
View Of Enniscorthy, England

13. The lord of the isles, 1815
by Walter Scott
Carrick Castle In Argyll, Scotland

16. The complete angler of Isaak Walton and Charles Cotton, 1835
by Izaak Walton

21. The lay of the last minstrel, 1823
by Sir Walter Bart Scott
View of Kelso, Scotland

23. Latin and Italian poems of Milton, 1808
by John Milton
The Inn at Edmonton

29. The causes, appearances, and effects of the
seasonal decay and decomposition of nature, 1837 by Robert Mudie

30. The curse of Kehama, 1812
by Robert Southey
Indian River Scene with Hindu Temple

34. The red true story book
by Andrew Lang and H. J. Ford
The Capture Of Joan Of Arc

35. The causes, appearances, and effects of the
seasonal decay and decomposition of nature, 1837 by Robert Mudie

37. Poems on several occasions, 1813
by Lord Edward Thurlow
A View of Dublin

40. The anthologies, an extensive collection
of all compositions subsequent to the Liang dynasty