After staring at his drab office walls for nearly two years, Ben Brucker had enough. “One day I just got so tired of how sterile and boring our office felt, I thought I should do something about it” Brucker explained to reddit.

Brucker, who works at a creative agency, was not allowed to damage or alter the walls in any way since his company was moving into new offices in the next six months, so whatever he did had to be temporary. 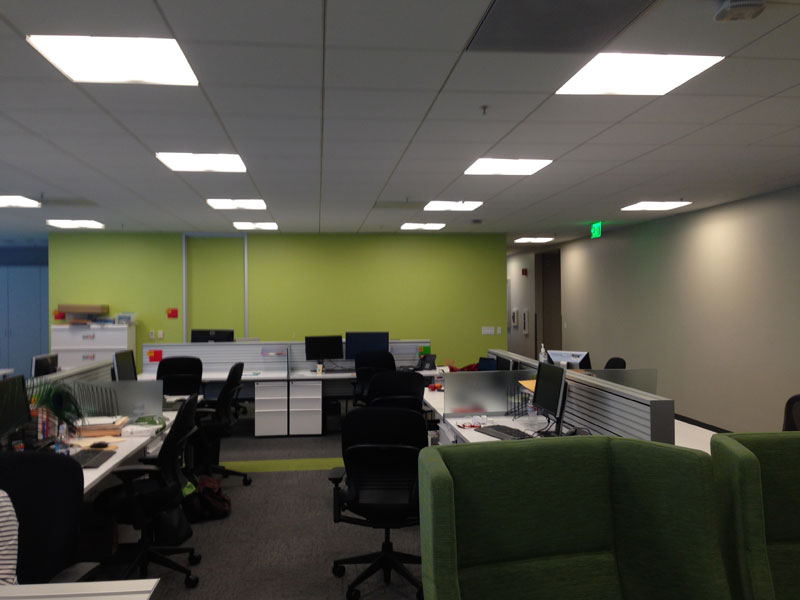 After getting the go-ahead from his boss, Brucker decided to use different colored Post-it notes to create a wall of ‘pixel art’ superheroes. After mocking up the designs in Photoshop, Brucker was ready to spice up the office walls.

“The designs were going to require 8,024 post-its in total. Once I calculated the total I needed of each color (which was kind of a pain), I had to figure out how many of each color pack I needed to order (which was even more of a pain). Some only came in assortment packs with other colors, so I decided on some of the backgrounds based on the most efficient use of the budget (which was about $300). There are a lot of leftovers, and some colors from the packs were not used at all. I ended up purchasing about 9,000 post-its.” [source]

“Some wonderful people in my office volunteered to come in over the weekend to install the mural. First thing we did was line the top row of every character panel. Then we used those to measure 2 foot (8 post-its) vertical grids spanning the whole wall.We taped them out to keep the grid as straight as possible, since there were a lot of helpers and the wall was huge. It felt daunting at first. It’s a very slow process, but we powered through.” [source] 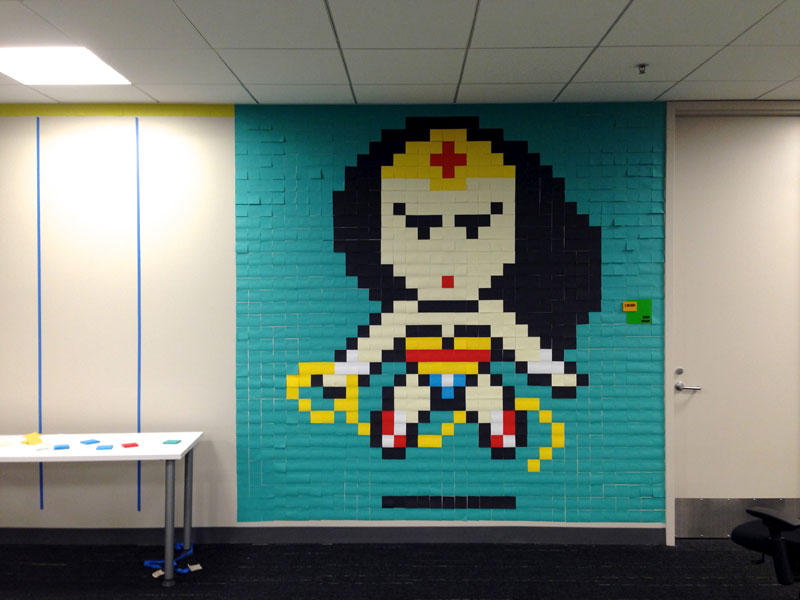 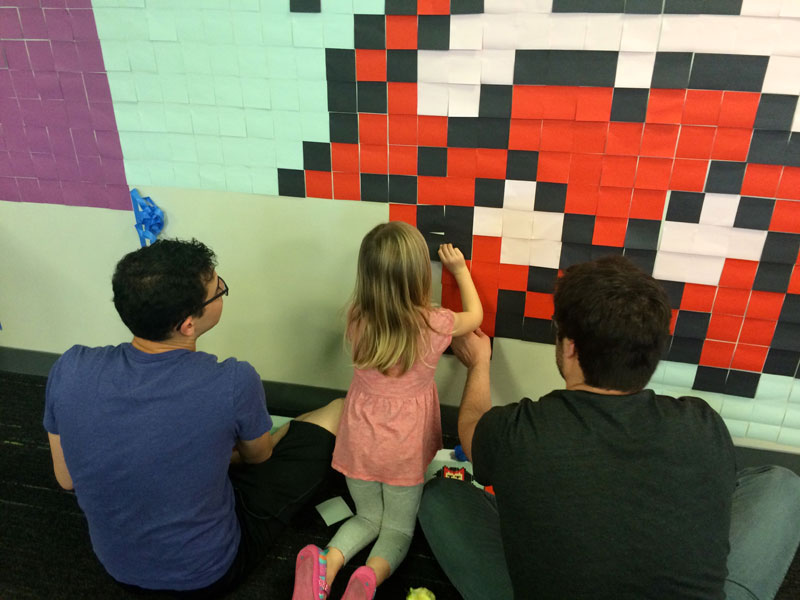 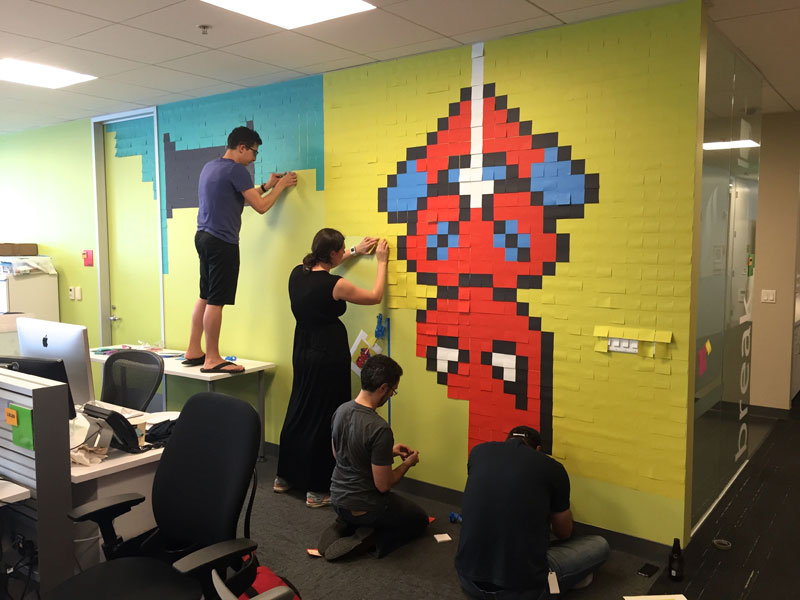 “We had people in and out helping all day, so I didn’t get any shots of everyone together 🙁 Though it did get really hot, everyone was really cool about it, and it was a ton of fun to create this thing and see it become a reality. We’ve gotten a lot of positive feedback, and people from all over the building have been coming to check it out. A big thanks to everyone involved!” [source] 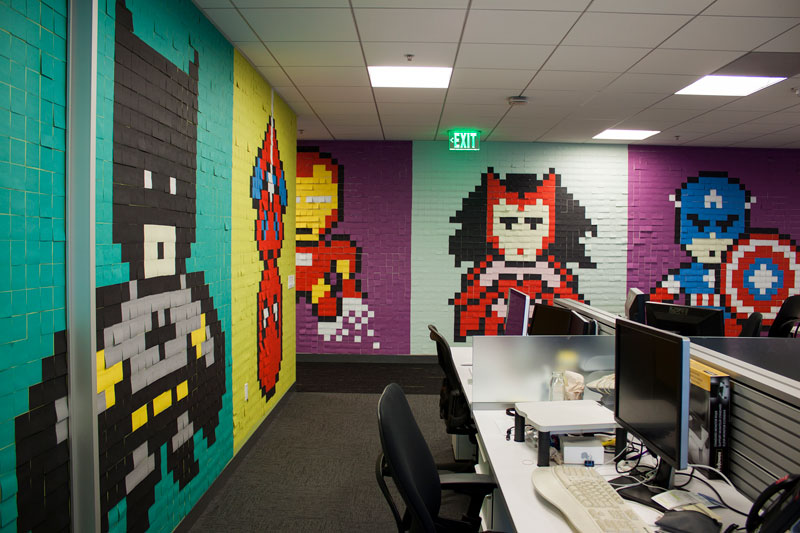 For more information see the original post on reddit. You can also find the complete album on Imgur and see a timelapse of the entire project on Vimeo (embedded below). 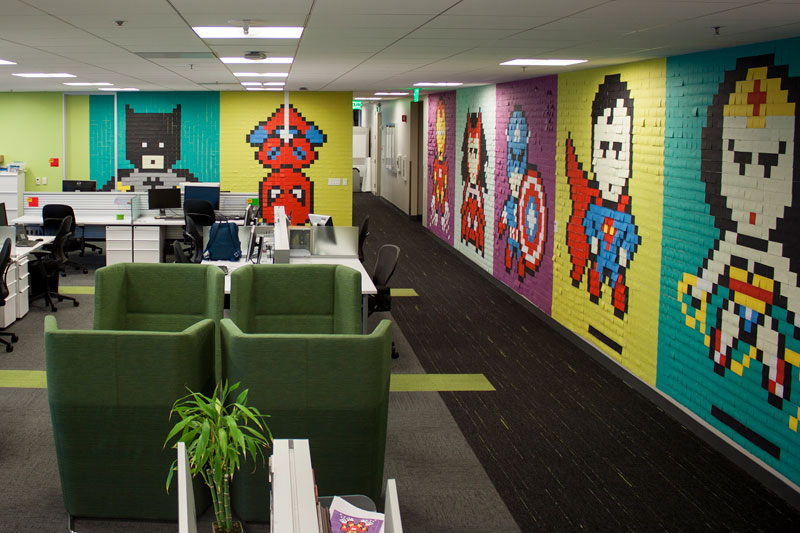