Picture of the Day: Colorful Watertower Sculpture in Brooklyn 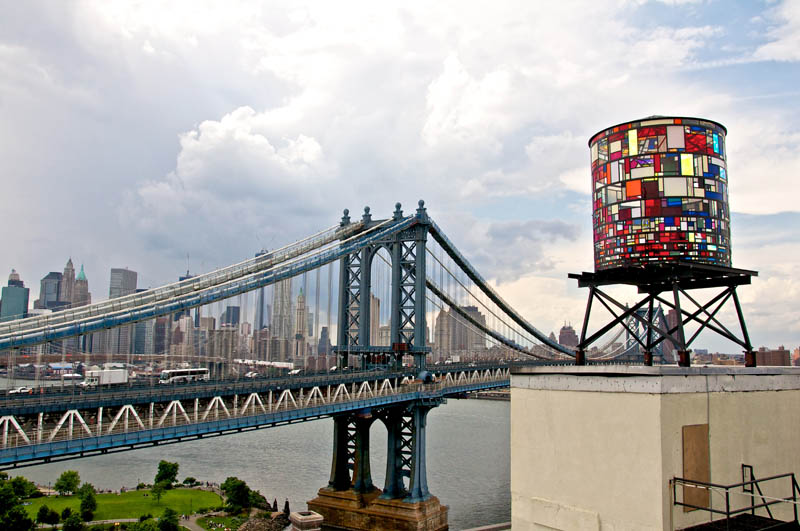 On the night of June 3rd, 2012, a new sculptural artwork by Brooklyn artist Tom Fruin surfaced in New York City. For the US premiere of his internationally recognized Icon series, Fruin has created a monumental water tower sculpture in colorful salvaged plexiglas and steel. Watertower will be mounted high upon a water tower platform to become a part of the DUMBO, Brooklyn skyline.

This project is the fourth work in the plexiglas and steel patchwork Icon series which features scavenged, reclaimed, and recycled materials constructed into sculptural tributes to architectural icons around the world, from the obelisco of Buenos Aires, to the kolonihavehuse of Copenhagen. The series can be seen as a three-dimensional evolution of Fruin’s found drug-bag quilts and flags for which he is well known.

Fruin, who often works with reclaimed and discarded materials, has composed Watertower from roughly one thousand scraps of plexiglas. It includes such details as interior and exterior access ladders and an operable roof hatch. The locally-sourced plexi came from all over New York City—from the floors of Chinatown sign shops, to the closed DUMBO studio of artist Dennis Oppenheim, to Astoria’s demolition salvage warehouse Build It Green!NYC.

Illuminated by the sun during the day and by Ardunio-controlled light sequences designed by Ryan Holsopple at night, this beacon of light is a tribute to the iconic New York water tower and a symbol of the vibrancy of Brooklyn. Watertower opens June 7th, with daily light shows beginning at dusk and continuing to morning. Situated on the rooftop of 20 Jay Street the sculpture will be viewable from the parks and streets of Dumbo, the Brooklyn and Manhattan Bridges, FDR Drive and Lower Manhattan.