The World Photography Organisation just revealed the shortlists for the Professional, Open and Youth categories of the 2013 Sony World Photography Awards. In a year that saw over 122,000 entries from 170 countries – the highest number of submissions to date – the judges have selected a shortlist of photographs that stood out beyond all others for their impressive high quality, originality and modern appeal.

Bringing together the very best international contemporary photography, the shortlist offers a unique insight into 2012 through the eyes of some of the world’s best emerging and established photography talents. The work of all the shortlisted photographers will be exhibited at Somerset House, London, from 26 April – 12 May as part of the 2013 Sony World Photography Awards Exhibition. The images will also be published in the 2013 edition of the Sony World Photography Awards book.

Below is a curated selection of some of the Sifter’s favourites from the shortlist and finalist galleries. To view all shortlisted entries, please visit the official WPO site at: http://www.worldphoto.org/about-the-sony-world-photography-awards/

Series made with two species of tree frogs in southern Brazil. These amazing animals jump to escape predators and catch their prey. For these images Hudson used a high-speed laser sensor positioned immediately in front of the plant where the tree frogs were.

Journey to Jerusalem of Africa by Gali Tibbon

Every year, just before Christmas day (Julian calendar) thousands of pious Christian orthodox worshipers make pilgrimage to Lalibela, a small town in Ethiopia’s highlands, known as ‘Jerusalem of Africa’ or ‘Black Jerusalem’. Lalibela is famous for its 13th century monolithic churches, carved out of the living rock and one of the world’s great wonders.

Personality and society. Reality vs illusions. by Ilya Pitalev 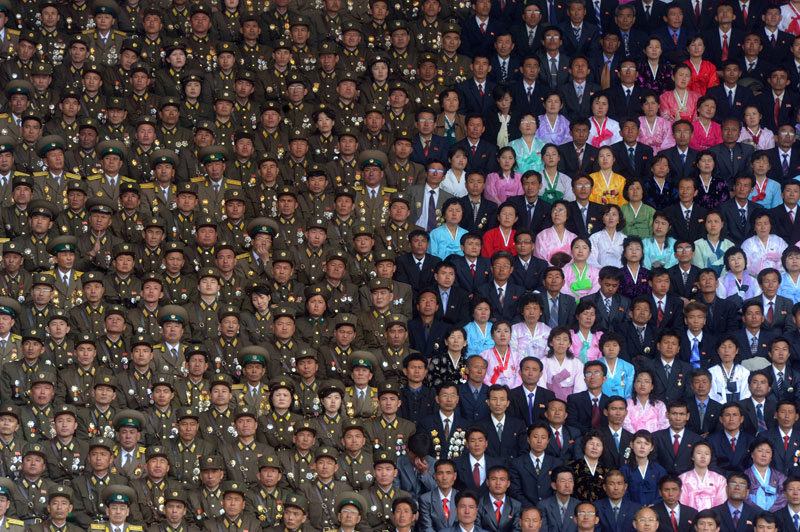 These are the photos taken during the celebration of the 100th anniversary of the birth of North Korea founder Kim Il Sung in Pyongyang in April 2012. 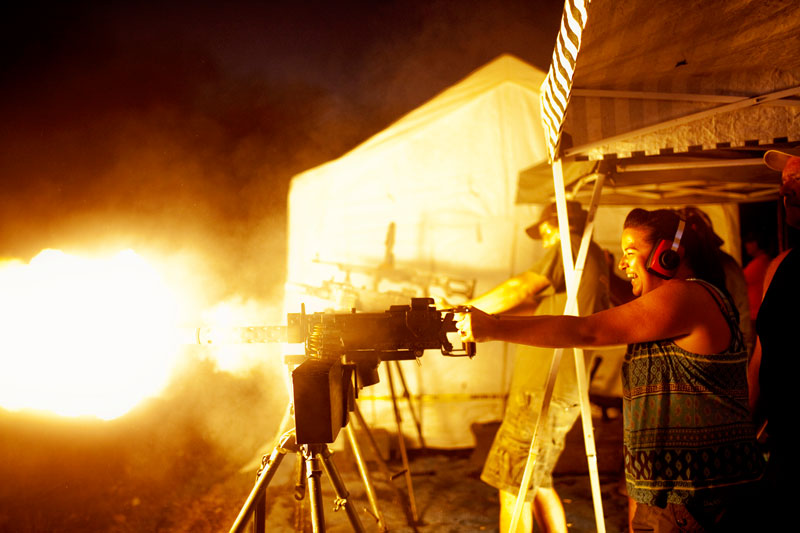 A kindergarten teacher from Greenwood, AK, fires an M1919 Browning .30 caliber machine gun on the first night of the Oklahoma Full Auto Shoot and Trade Show. “It is such an adrenaline rush” – she explained after stepping back from the weapon. She had traveled to OFASTS for the first time with her husband and eight-year-old son. “I grew up hunting with my Dad so guns are nothing unusual for me” – she said.

Faster than the Speed of Sound by Balazs Gardi 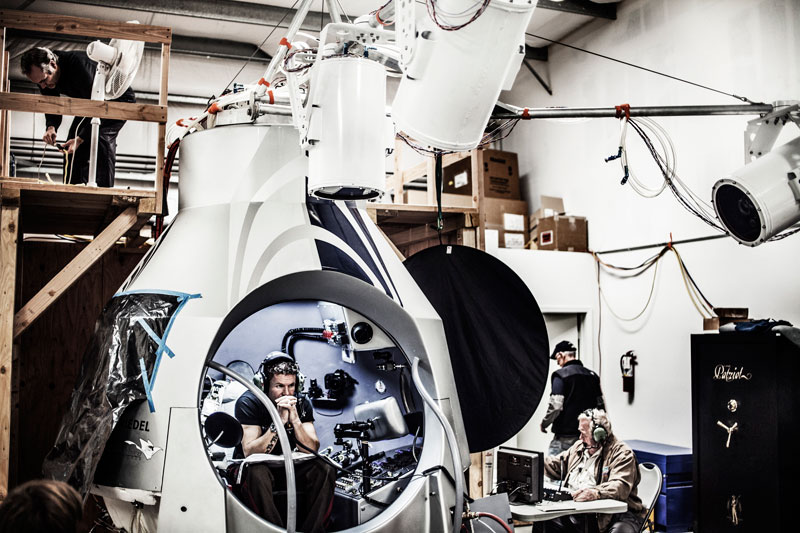 Felix Baumgartner contemplates in the stratospheric capsule during an egress training in Lancaster, California, USA on February 22, 2012. On October 14, 2012 Austrian skydiver Felix Baumgartner broke the world record for balloon and free-fall height and became the first person to break the sound barrier without propulsion. After jumping from a helium balloon over 39 kilometers into the stratosphere his free fall reached a speed of 1,342 kilometers per hour.

A greyhound ends first in his race, and although the lure is right in front of him, he’s looks straight into the eyes of the photographer (me) and continues his run. I had to jump for my life taking this picture.

On the Shore of a Vanishing Island by Daesung Lee

I focused on showing the tragic situation rather than on a story of their lives. I did not want to follow the general style of photojournalism, because the eroding shore tells the story about the situation where villagers live in. Ghoramara Island is located in West Bengal. Due to the dramatic increase in sea level, resulting from global warming since the 1960’s, the shores of this island are being perpetually washed away. As a result two-thirds of the population have moved away from the island. Many of the people still living on the island are farmers and fishermen who depend on the island’s resources for their livelihoods.

The Last Days of Obama’s Campaign by Brooks Kraft

Photojournalist Brooks Kraft followed Barack Obama during his last campaign producing an intimate look at the President fighting for re-election.

Inside Kabul’s Screens by Danish Siddiqui

Cinema goers watch a Pashto film at Pamir Cinema in Kabul May 4, 2012. Once a treasured luxury for the elite, Afghan cinemas are dilapidated and reflect an industry on the brink of collapse from conflict and financial neglect. Kabul’s cinemas show Pakistani films in Pashto, American action films and Bollywood to rowdy, largely unemployed crowds in pursuit of any distraction from their drab surroundings.

Project: Honkey Kong – a 2d platform game tribute. Shot on location in Hong Kong. Images were shot from skyscrapers toward the ground, using a telephoto lens to make the image as flat as possible to make it look like a platform game.

The Wealthy Roma of Buzescu by Ivan Kashinsky

Six-year old twins Gelu and Edi Petrache sit on stairs in a mansion on Easter Sunday in Buzescu, a small town in Romania. Buzescu is known for its ultra-wealthy Roma and their bizarre mansions that line the main street. The Roma of Buzescu are part of the Kalderash clan and are known for being coppersmiths and dealing with metal scraps. After the fall of the communist regime in the late 80s, they stripped old factories of their metals and some made a small fortune re-selling them. They are also known for making cazane, copper stills that produce alcohol such as palinka, a plum brandy. 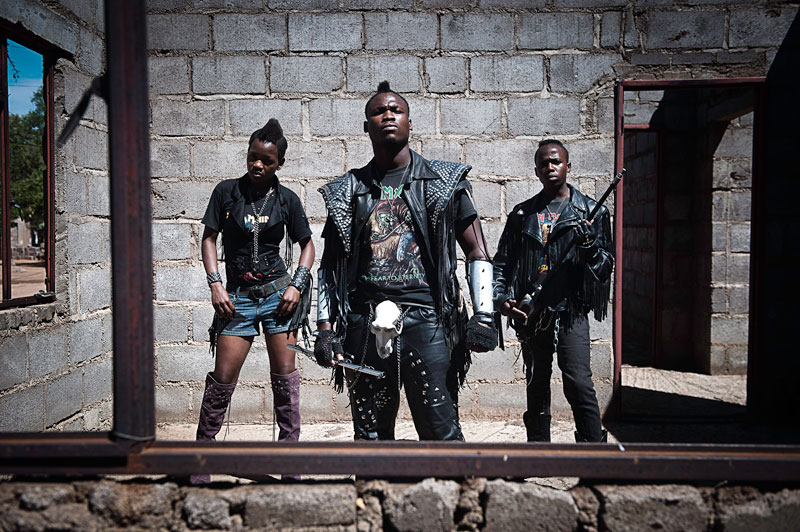 In Botswana metal music has landed in the nineties, but the rock came in the seventies by two Italian brothers, Ivo and Renato Sbrana, born and raised in the heart of Africa. The metal complexes are performing in nightclubs, concerts, festivals. The most famous african rock band is now Skinflint. The ranks of their fans has expanded dramatically. These fans wear jackets and black leather pants, studded belts, boots and cowboy hats. On their t-shirts stand out skulls, obscenities, historical covers of hard-rock groups popular in the seventies and eighties of the last century such as Iron Maiden, Metallica, AC / DC. Basically they created their own style look that is inspired by the classic symbolism metal, but also borrows heavily from the iconography of hands-Western film and the traditional rural world of Botswana (ever-present horns of animals concealed beneath the leather jacket).

All images were shot at night-time in Düsseldorf, Germany. The images are less of an architectural story but more about what visual impact of light or better the absence of it has on architecture and on the observer. The images are reflections on the observation about energy being conserved at night-time in German urban spaces. Once lit monoliths, urban structure now more and more become ghostly colossus and an indicator of changing times. Light usually takes away the fears of the night and indicates the wealth and prosperity in the western world. Dark cities and dark structures were once trademark signs of impoverished countries and the communist east. With that era being a thing of the past, the new urban darkness indicates a change of times.

A Portrait of the Matterhorn by Nenad Saljic 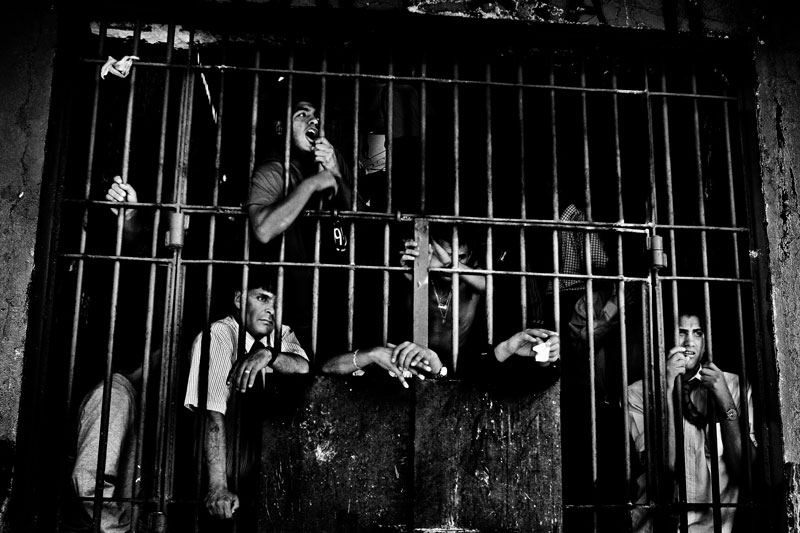 Prison inmates Santiago, Chile. I spent 10 years travelling for South-America jails. A different and complex world in which violence and abuse are part of convicts life. I saw how the convicts try to find a space similar to that one they had outside jails. They try to preserve their dignity. The necessity to recreate their space is the only way to defend them. They hardly try to maintain their habits in a human boundary condition and overcrowding status. Violence and power management inside the jails are direct consequences of these conditions. I went around for 74 male and female jails in Ecuador, Peru, Bolivia, Argentina, Chile, Uruguay, Brazil, Colombia e Venezuela. I got in contact with prisoners and guards, with fear and anger, with hope and diffidence. Some convicts considered me a distraction, others looked at me with envy, others again with contempt because they thought that I was there only for taking pictures to sell of their confined life.

Game of Colors by Anurag Kumar

Holi – the festival of colors – is undoubtedly the most fun-filled and boisterous of Hindu festivals. It’s an occasion that brings in unadulterated joy and mirth, fun and play, music and dance, and, of course, lots of bright colors!

Face to Face by Christian Vizl

They explore the underwater world, and its infinite possibilities for generating strong emotions in the human beings. I try to capture sublime moments of our natural environment with images that inspire, make us vibrate through the beauty in every corner of the world that excite and make us dream of a better world, where we value and care for all expressions of life. Because beyond the issue of our survival is the issue of how we experience our life and how we celebrate it. And our experience of life is intrinsically linked to how we communicate and “connect” with everything around us, especially with all life around us. In my case, it is the ocean and its living creature that makes me want to celebrate. So my photography is intended to be a celebration of marine life and the underwater world. 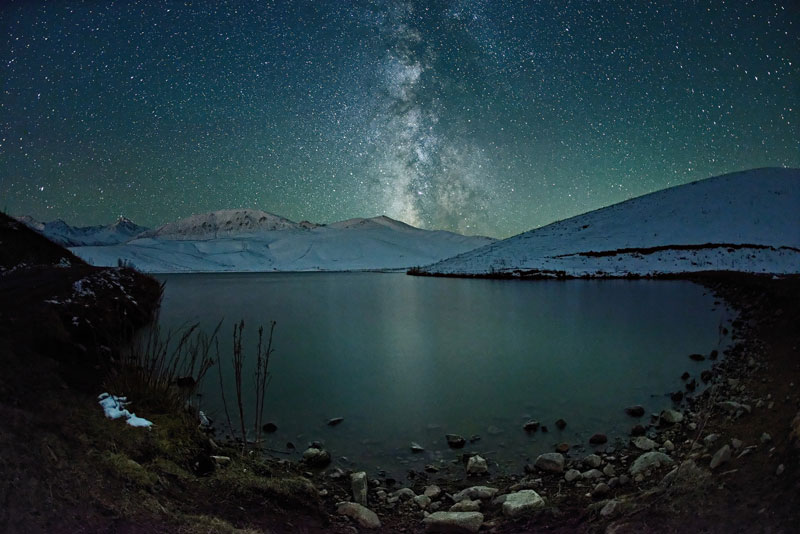 Milky Way, looking like a giant tree atop of the mountain near Ush Konyr plateau.

This is an alternative point of view of the famous Hawaiian beach. People aren’t disposed in a horizontal plan, as usually on a beach, but caught in a vertical exposure.

The last pollen spore preparing to leave a ladybird trying to hold on, because it didn’t want to be alone.

Viet Nam has many ethnic minorities. This is ethnic ‘Mong’, who live in the Central Highlands Dak Nong-Vietnam Two old friends are telling each other jokes. 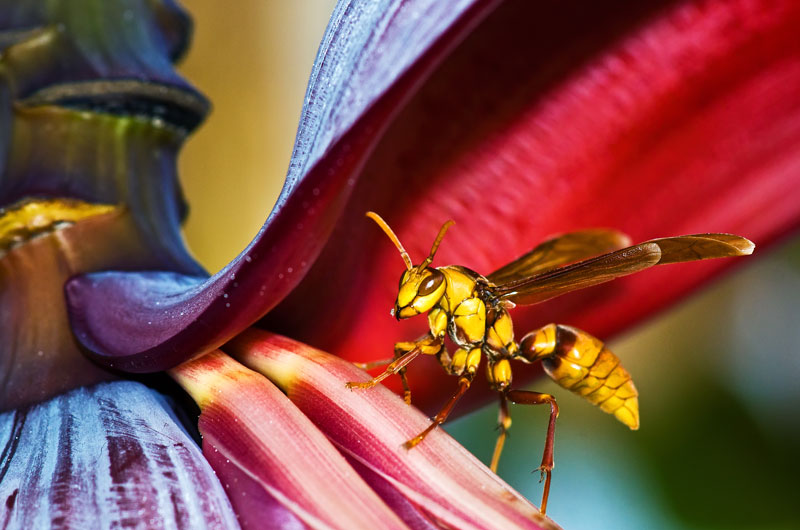 A huge wasp measuring 2.5 inches in length visiting the banana tree in my front yard. 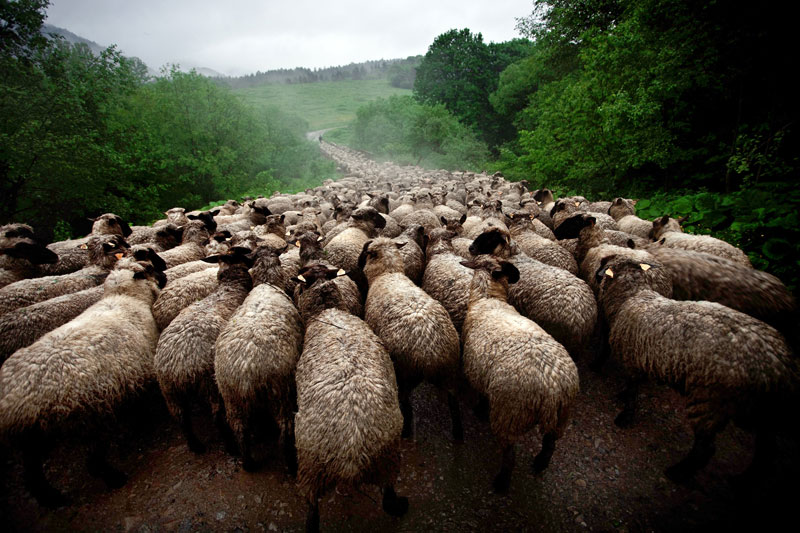 Bieszczady mountains, Poland. Rain water evaporates from the soaked sheep fur while the shepherd leads animals to the house in the mountain pastures.

I was hanging around the Jaipur’s suburbia when I noticed a cloud of birds in the air. I’ve just instinctively released the shutter. Soul of Sir Hitchcock lives here I thought 🙂

Action Inside by Markus Reugels

All my high-speed pictures are single shots without any Photoshop manipulation. I only adjust the levels of contrast. Some little sprinkles are cleaned with PS. That’s all the processing.

Monks looked up at the magnificent night sky filled with thousands of lanterns in awe. Yi Peng lantern festival is meant as a time for tham bun to make merit. This was the moment I’ve been waiting for and it lasted very quickly due to strong wind. A very heavy downpour occurred right after we left the place. The lanterns were made of organic materials.

Two Pieris brassicae resting on plant and waiting for sunshine.

The Godfather by Peter Delaney

I took this photo on the road to Ambleside from Keswick, it’s rare you’ll get any of the lakes or waters this still through the day. The Sun was directly above the fell these trees are on, which created this strong golden touch fringing all the woodland.

Highlights from the 2012 Wildlife Photographer of the Year 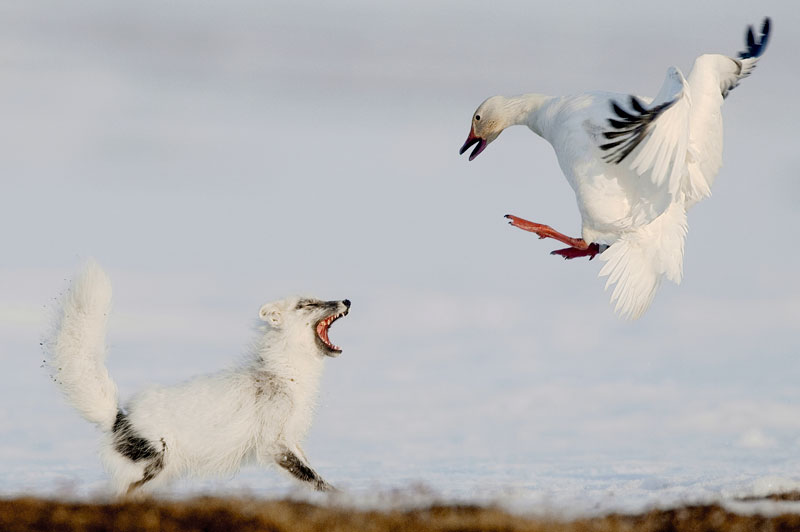 The 2011 Wikimedia Commons Picture of the Year Contest