The Hypnotic Magnetism of Ferrofluids

A ferrofluid (portmanteau of ferromagnetic, and fluid) is a liquid which becomes strongly magnetized in the presence of a magnetic field.

Ferrofluids are colloidal liquids made of nanoscale ferromagnetic, or ferrimagnetic, particles suspended in a carrier fluid (usually an organic solvent or water). Each tiny particle is thoroughly coated with a surfactant (dispersing agent) to inhibit clumping.

Ferrofluids usually do not retain magnetization in the absence of an externally applied field and thus are often classified as “superparamagnets” rather than ferromagnets. The difference between ferrofluids and magnetorheological fluids (MR fluids) is the size of the particles. [Source: Wikipedia]

Below you will find a remarkable gallery of this fascinating liquid along with additional information about the history, science and applications of ferrofluids. Enjoy! 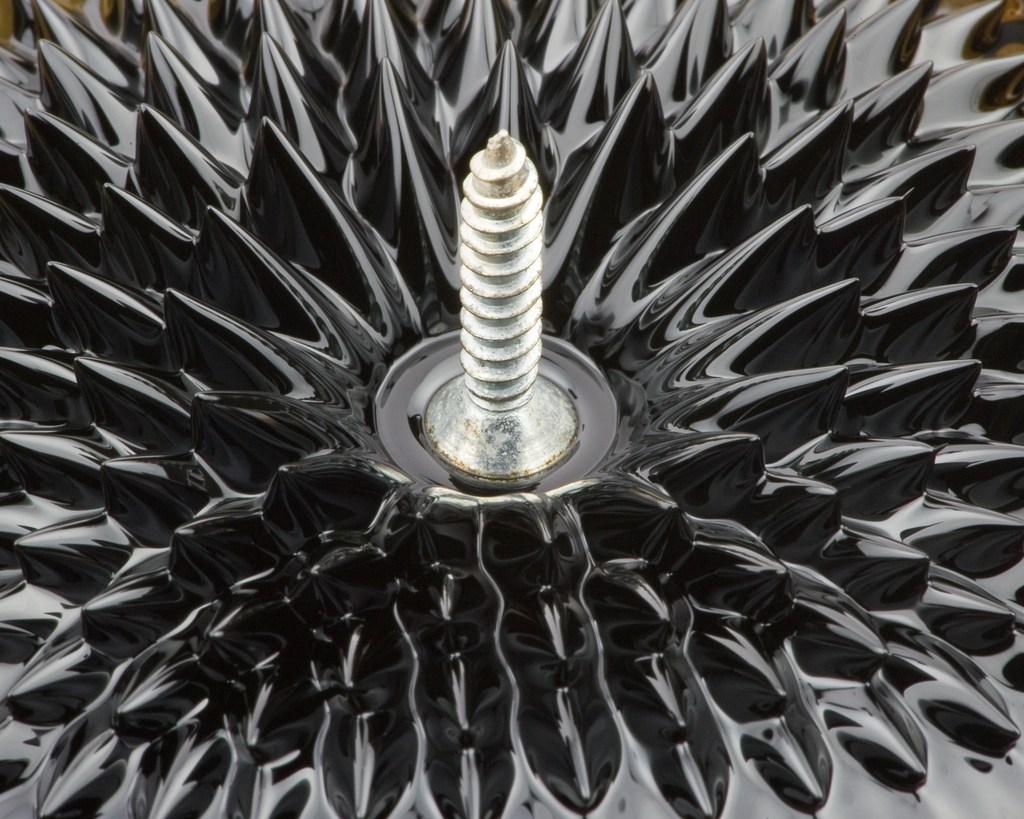 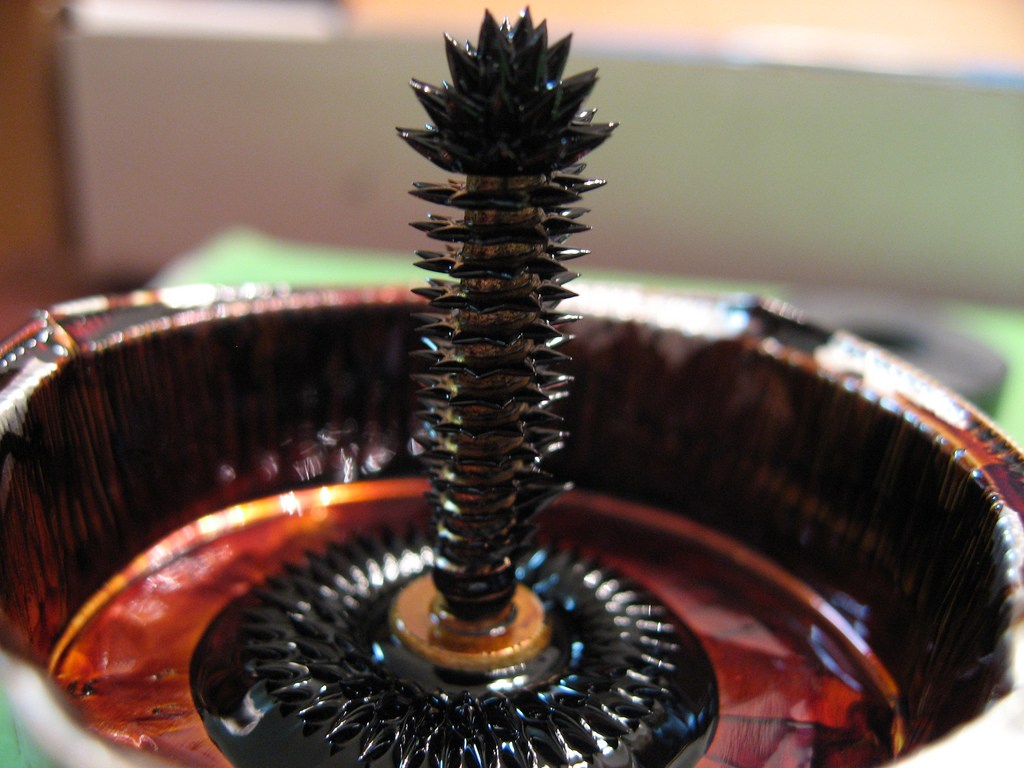 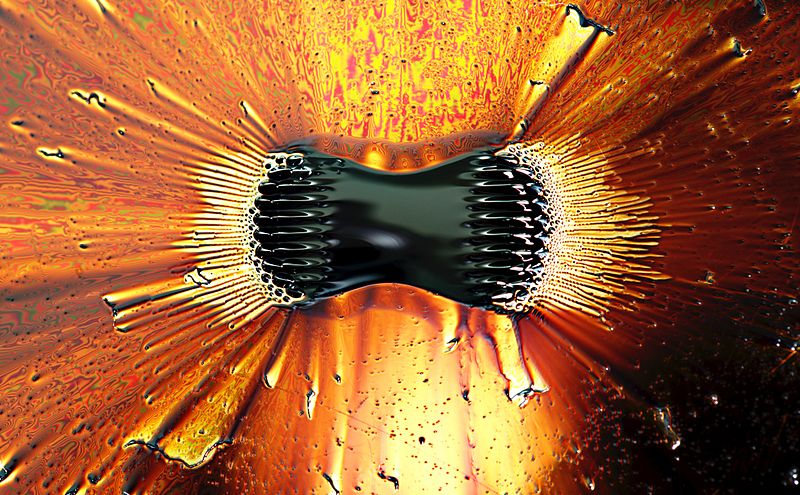 Where did Ferrofluids come from?

Ferrofluids were originally discovered in the 1960s at the NASA Research Center, where scientists were investigating different possible methods of controlling liquids in space. The benefits of a magnetic fluid were immediately obvious: The location of the fluid could be precisely controlled through the application of a magnetic field, and, by varying the strength of the field, the fluids could be forced to flow. 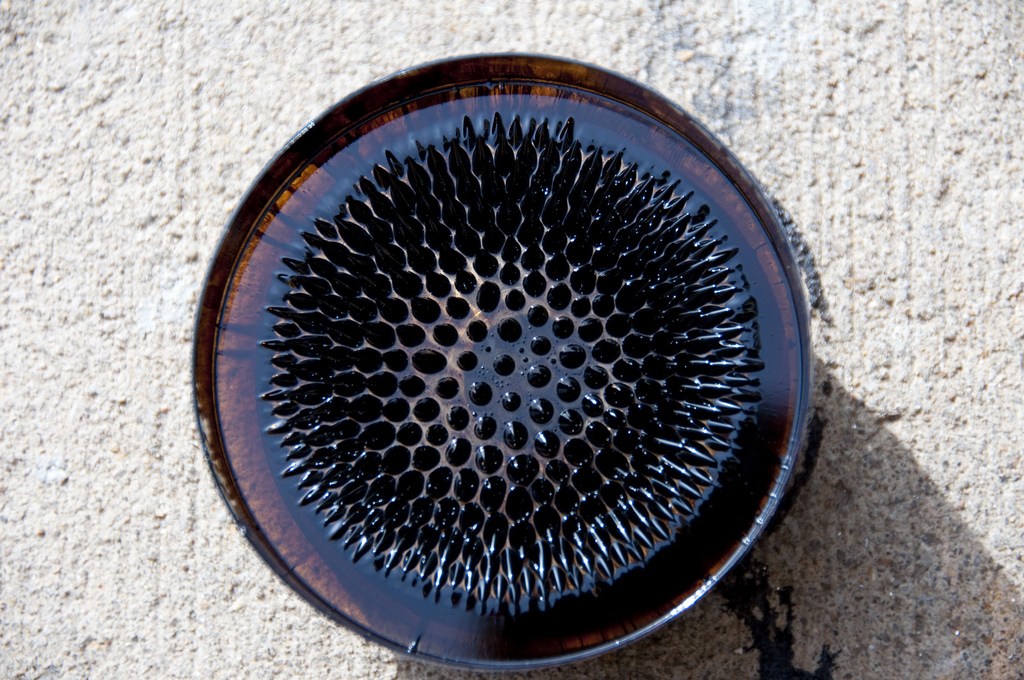 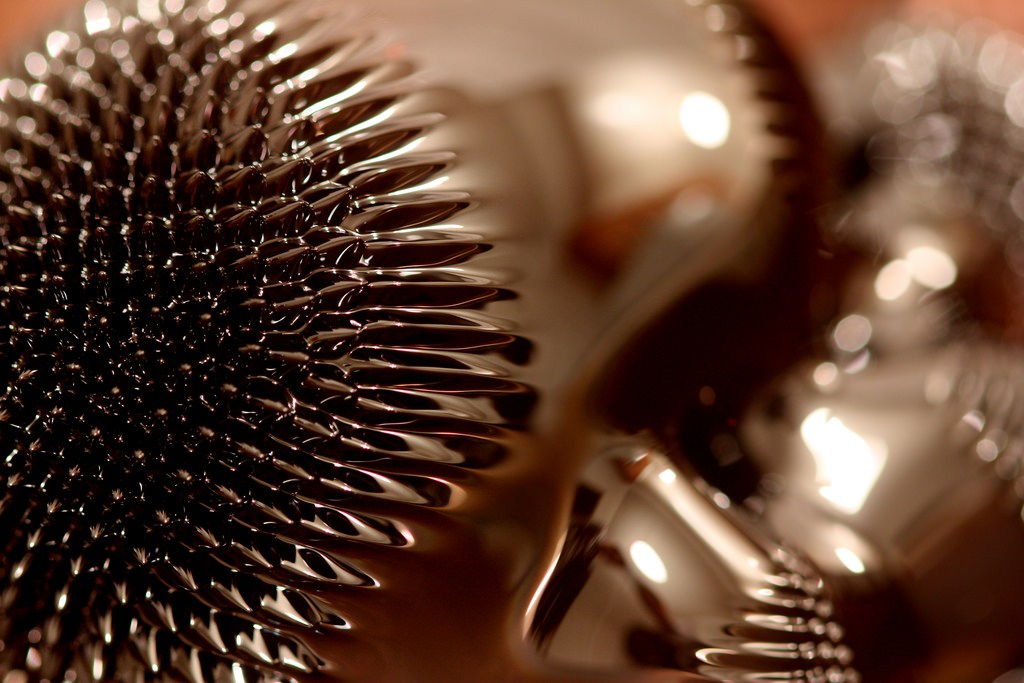 How Do Ferrofluids Work?

In the absence of a magnetic field, the magnetic moments of the particles are randomly distributed and the fluid has no net magnetization.

In a gradient field the whole fluid responds as a homogeneous magnetic liquid which moves to the region of highest flux. This means that ferrofluids can be precisely positioned and controlled by an external magnetic field. The forces holding the magnetic fluid in place are proportional to the gradient of the external field and the magnetization value of the fluid. This means that the retention force of a ferrofluid can be adjusted by changing either the magnetization of the fluid or the magnetic field in the region. [Source: Ferrotec] 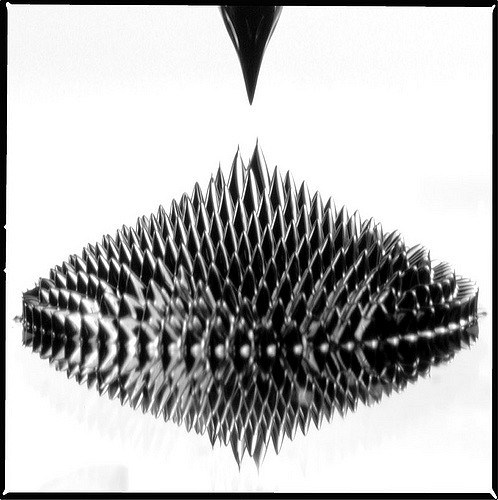 What are Some Applications of Ferrofluids?

Although the array of spikes on the surface of the ferrofluid is spectacular, this property is not particularly useful. However, ferrofluids have found a wide variety of applications, including use in rotating shaft seals. A ferrofluid can behave as a liquid O-ring where a rotating shaft enters either a low- or high-pressure chamber. The ferrofluid is held in place by permanent magnets and forms a tight seal, eliminating most of the friction produced in a traditional mechanical seal. These rotating shaft seals are found in rotating anode X-ray generators and in vacuum chambers used in the semiconductor industry. Ferrofluid seals are used in high-speed computer disk drives to eliminate harmful dust particles or other impurities that can cause the data-reading heads to crash into the disks.

Another application of ferrofluids is in improving the performance of loudspeakers. In a loudspeaker, electric energy is sent through a coil located in the center of a circular permanent magnet. The magnetic field induced by the electric energy causes the coil to vibrate and thus produces sound and heat. Bathing the electric coil in a ferrofluid, which is held in place by circular permanent magnets, dampens unwanted resonances and also provides a mechanism to dissipate heat from excess energy supplied to the coil. Both of these factors lead to an overall improved sound quality.

Finally, there is much hope for future biomedical applications of ferrofluids. For example, researchers are attempting to design ferrofluids that can carry medications to specific locations in the body through the use of applied magnetic fields. Other ongoing work is investigating the use of ferrofluids as contrast agents for magnetic resonance imaging (MRI). [Source: University of Wisconsin]