10 Most Expensive Paintings Sold in the 21st Century 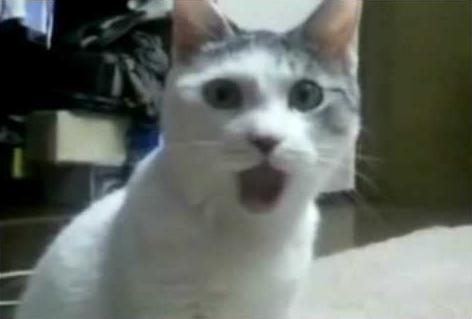 For those not privy to the world of high art (myself included) the prices below may cause jaws to unhinge. These ten paintings alone, which were all sold from 2002 onwards, total $1.14 billion USD. That is not a typo. Shawn Parker (played by Justin Timberlake) said it best in The Social Network, “A million dollars isn’t cool. You know what’s cool? A billion dollars”.

Apparently these 10 paintings are even cooler…

No. 5, 1948 is a painting by Jackson Pollock, an American painter known for his contributions to the abstract expressionist movement. The painting was done on an 8′ x 4′ (2.4m x 1.2m) sheet of fiberboard, with thick amounts of brown and yellow paint drizzled on top of it, forming a nest-like appearance. It was originally owned by Samuel Irving Newhouse and displayed at the Museum of Modern Art before being sold to David Geffen and then allegedly to David Martinez in 2006. [Source: The New York Times | BBC News]

From late 70s to 1994 this painting was part of Tehran Museum of Contemporary Art collection, but after the revolution in 1979, this painting could not be shown because of strict rules set by the government about the visual arts and what they depict. Finally, in 1994 it was quietly traded by Thomas Ammann Fine Art to David Geffen for the remainder of the 16th century Persian manuscript, Tahmasbi Shahnameh.

In November 2006, the painting was sold by David Geffen to billionaire Steven A. Cohen for $137.5 million, making it the second most expensive painting ever sold. [Source: The New York Times]

Portrait of Adele Bloch-Bauer I is a painting by Gustav Klimt completed in 1907. According to press reports it was sold for US$135 million to Ronald Lauder for his Neue Galerie in New York City in June 2006, which made it at that time the most expensive painting ever sold. It has been on display at the gallery since July 2006.

Klimt took three years to complete the painting. It measures 138 x 138 cm (54 in x 54 in) and is made of oil and gold on canvas, showing elaborate and complex ornamentation as seen in the Jugendstil style. Klimt was a member of the Vienna Secession, a group of artists that broke away from the traditional way of painting. The picture was painted in Vienna and commissioned by Ferdinand Bloch-Bauer. As a wealthy industrialist who had made his fortune in the sugar industry, he sponsored the arts and favored and supported Gustav Klimt. Adele Bloch-Bauer became the only model who was painted twice by Klimt when he completed a second picture of her, Adele Bloch-Bauer II, in 1912. [Source: Wikipedia]

Garcon a la Pipe (English: Boy with a Pipe) is a painting by Pablo Picasso. It was painted in 1905 when Picasso was 24 years old, during his Rose Period, soon after he settled in the Montmartre section of Paris, France. The oil on canvas painting depicts a Parisian boy holding a pipe in his left hand and wearing a garland or wreath of flowers.

Many art critics have stated that the painting’s high sale price has much more to do with the artist’s name than with the merit or historical importance of the painting. The Washington Post’s article on the sale contained the following characterisation of the reaction:

“Picasso expert Pepe Karmel, reached in New York the morning after the sale, was waxing wroth about the whole affair. “I’m stunned,” he said, “that a pleasant, minor painting could command a price appropriate to a real masterwork by Picasso. This just shows how much the marketplace is divorced from the true values of art.” [Source: Wikipedia] 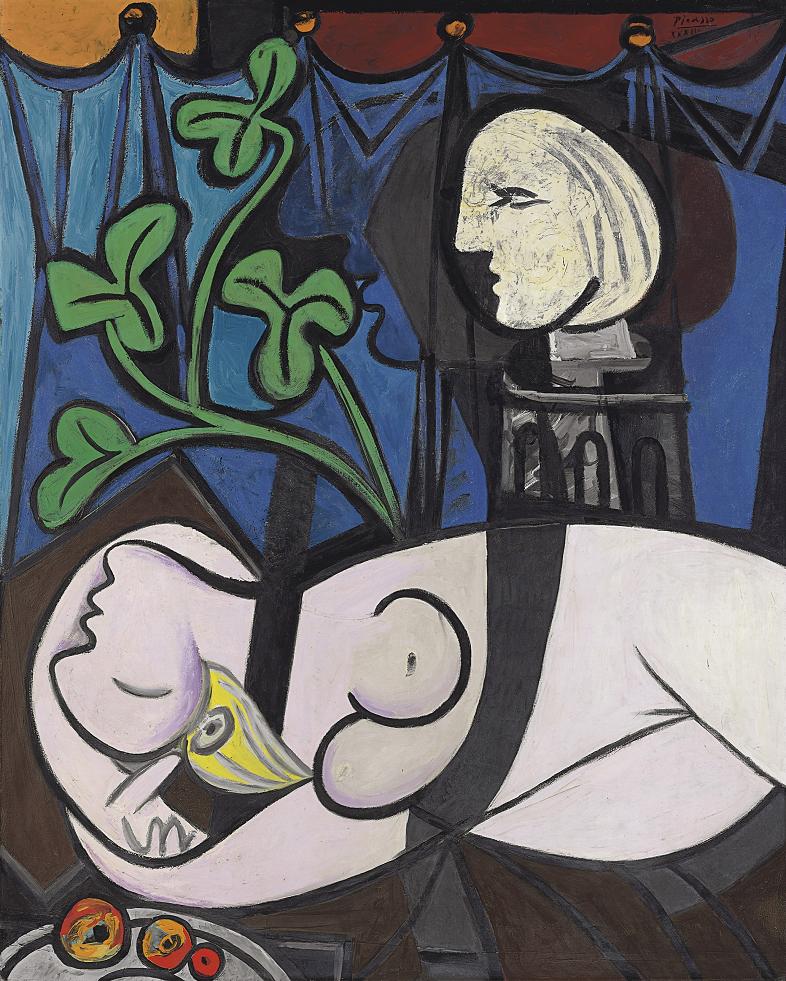 Nude, Green Leaves and Bust (French: Nu au Plateau de Sculpteur) is a 1932 painting by Pablo Picasso, featuring his mistress Marie-Thérèse Walter. The painting was in the personal collection of Los Angeles art collectors Sidney and Frances Brody for nearly six decades. It sold at auction for US$106.5 million, a world record price.

Nude, Green Leaves and Bust is one of a series of portraits that Picasso painted of his mistress and muse Marie-Thérèse Walter from 1932. The vibrant blue and lilac canvas is more than five feet tall (1.6m 1.3m | 64 in x 51 in). It was bought by the Brodys in 1951 from Picasso’s dealer and was only publicly exhibited once, in 1961, to commemorate Picasso’s 80th birthday.

Frances Brody died in November 2009. On May 4, 2010, the painting was sold at Christies in New York City. Christie’s won the rights to auction the collection against London-based Sotheby’s. The collection as a whole was valued at over $150 million USD, while the work was originally expected to earn $80 million at auction.

There were eight bidders at the auction house, while the winning bid was taken via telephone for $95 million. Including the buyer’s premium, the price reached $106.5 million USD. When inflation is ignored, the painting broke the record price for an art work sold at auction. [Source: Wikipedia] 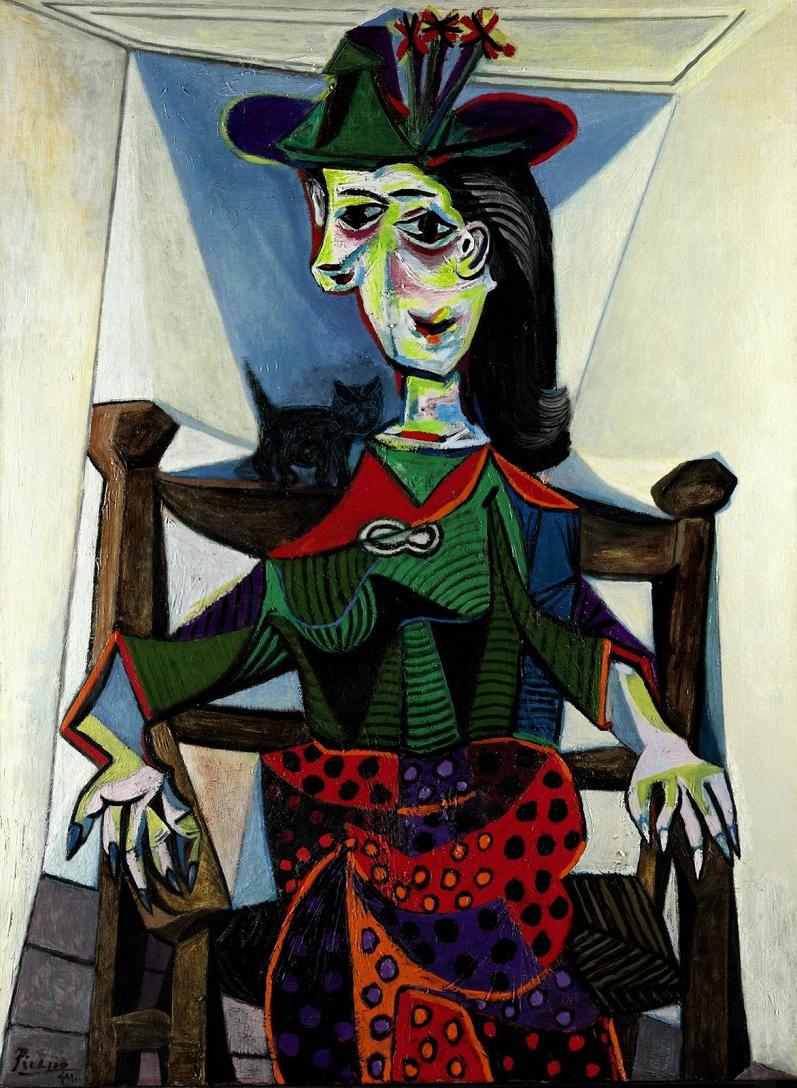 The canvas was one of many portraits of Dora Maar painted by Pablo Picasso over their nearly decade-long relationship. Picasso fell in love with the 36-year old Maar at the age of 55 and soon began living with her. This painting was done during the year 1941, when the Nazis were occupying France. In the 1940s, the painting was obtained by Chicago collectors Leigh and Mary Block. They sold the painting in 1963. After that, the painting was never shown until the 21st century. [Source: Wikipedia]

EIGHT ELVISES is a 12-foot painting that has all the virtues of a great Andy Warhol: fame, repetition and the threat of death. The canvas is also awash with the artist’s favourite colour, silver, and dates from a vintage Warhol year, 1963. It did not leave the home of Annibale Berlingieri, a Roman collector, for 40 years, but in autumn 2008 it sold for over $100m in a deal brokered by Philippe Ségalot, the French art consultant.

That sale was a world record for Warhol and a benchmark that only four other artists—Pablo Picasso, Jackson Pollock, Willem De Kooning and Gustav Klimt—have ever achieved.

Warhol’s oeuvre is huge. It consists of about 10,000 artworks made between 1961, when the artist gave up graphic design, and 1987, when he died suddenly at the age of 58. Most of these are silk-screen paintings portraying anything from Campbell’s soup cans to Jackie Kennedy and Mao Zedong, drag queens and commissioning collectors. Warhol also created “disaster paintings” from newspaper clippings, as well as abstract works such as shadows and oxidations. The paintings come in series of various sizes. There are only 20 “Most Wanted Men” canvases, for example, but about 650 “Flower” paintings. Warhol also made sculpture and many experimental films, which contribute greatly to his legacy as an innovator. [Source: The Economist]

Both portraits of Adele Bloch-Bauer were part of a protracted court battle in the United States and in Austria (see Republic of Austria v. Altmann) which resulted in five Gustav Klimt paintings being returned to Maria Altmann, the niece of Ferdinand Bloch-Bauer, in January 2006. In November 2006, Christie’s auction house sold “Portrait of Adele Bloch-Bauer II” at auction for $88 million, the third-highest priced piece of art at auction at the time. [Source: Wikipedia] 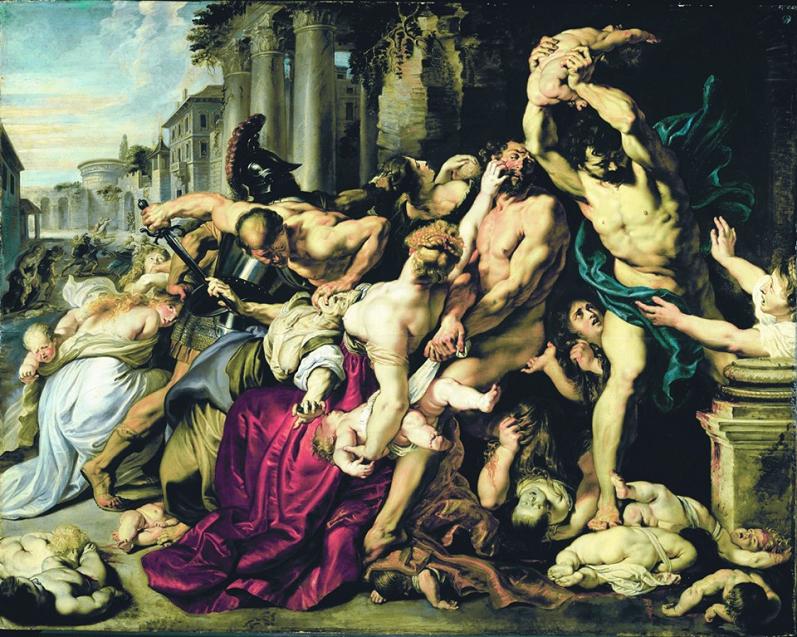 The first version painted by Rubens dates from around 1611–12. In the seventeenth-century, the painting was part of the Liechtenstein Collection in Vienna, Austria, along with another Rubens’ masterpiece, Samson and Delilah. After having been miscatalogued by Vincenzio Fanti in 1767, it was attributed to one of Rubens’ assistants, Jan van den Hoecke, after Rubens. There it remained until it was sold to an Austrian family in 1920.

It was subsequently loaned in 1923 to Stift Reichersberg, a monastery in northern Austria. In 2001, the painting was seen by George Gordon, an expert in Flemish and Dutch paintings at Sotheby’s in London. He was persuaded that it was indeed a Rubens by its similar characteristics and style to the Samson and Delilah picture, painted at around the same time. The work was sold at auction at Sotheby’s, London on July 10, 2002 for $117 Million CAD to Canadian businessman Kenneth Thomson.

Following the auction the painting was loaned to the National Gallery, London for a period before its transfer in 2008 to the Art Gallery of Ontario in Toronto, to whom Thomson had donated it, and which was undergoing a major rebuilding and expansion during these years. [Source: Wikipedia]

Francis Bacon’s Triptych 1976, which was originally purchased by Petrus’ Jean-Pierre Moueix in 1977, was sold at auction at Sotheby’s in New York May 14 for $86.3 million, the highest price ever paid for a work of post-war art.

The buyer was billionaire Roman Abramovich, and it’s no surprise he would take such an interest in a British artist such as Bacon—the Russian oil magnate, estimated to be worth nearly $20 billion, is best known as the owner of English Premier League soccer club Chelsea, which he purchased in 2003 for a mere $233 million. [Source: Wine Spectator]

If you enjoyed this article, the Sifter highly recommends: THE MOST EXPENSIVE PROPERTY IN BROOKLYN, NEW YORK
Article Categories:
art