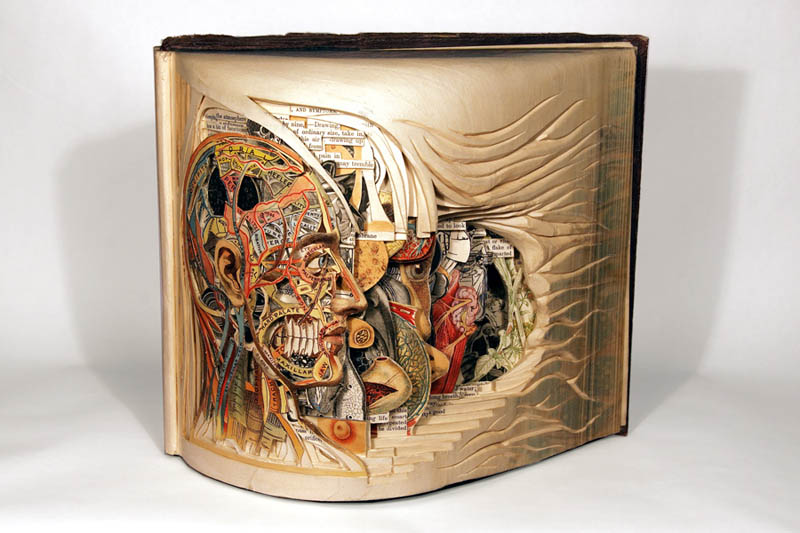 Born in Chicago but currently living and working out of Atlanta, Georgia, contemporary artist Brian Dettmer creates incredible works of art with old books and tremendous patience. Using knives, tweezers and surgical tools, Brian meticulously exposes various layers to create his mind-blowing artwork. Dettmer has received critical acclaim around the world and his work can be found in countless galleries and publications. Below you will find a small sample of his art along with an artist bio and statement from Dettmer. Be sure to visit Brian’s official site: briandettmer.com for more information and photographs of his fantastic art. 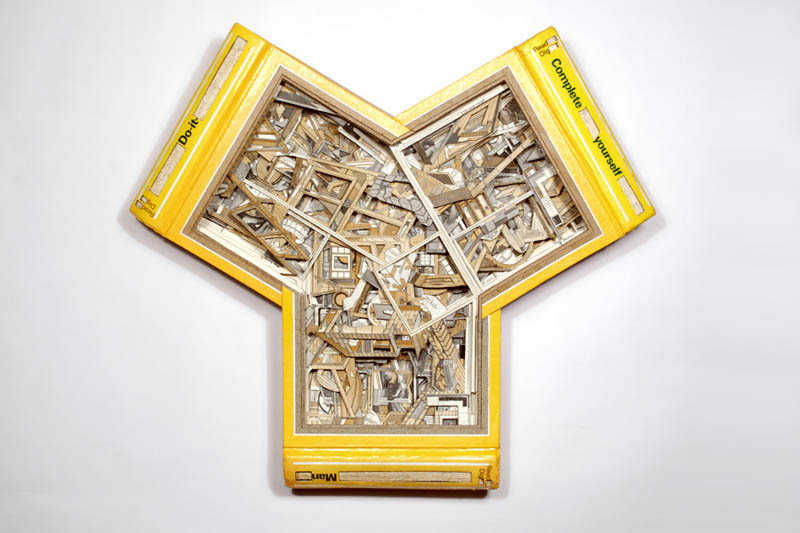 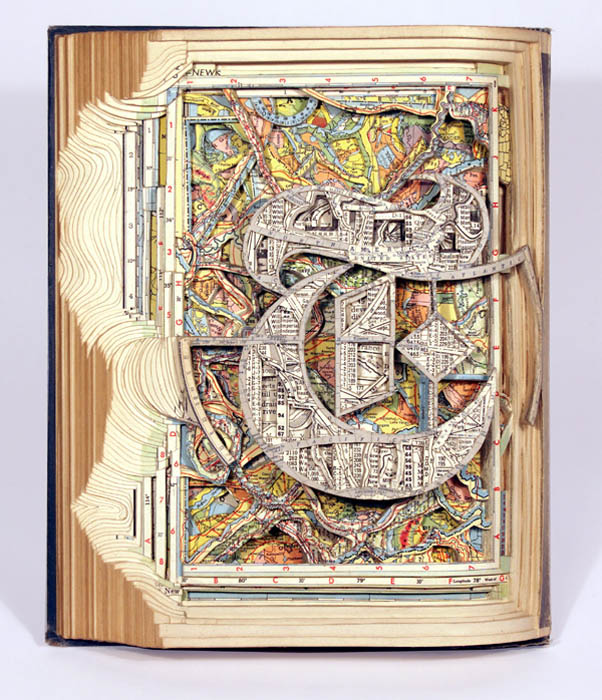 The age of information in physical form is waning. As intangible routes thrive with quicker fluidity, material and history are being lost, slipping and eroding into the ether. Newer media swiftly flips forms, unrestricted by the weight of material and the responsibility of history. In the tangible world we are left with a frozen material but in the intangible world we may be left with nothing. History is lost as formats change from physical stability to digital distress.

The richness and depth of the book is universally respected yet often undiscovered as the monopoly of the form and relevance of the information fades over time. The book’s intended function has decreased and the form remains linear in a non-linear world. By altering physical forms of information and shifting preconceived functions, new and unexpected roles emerge. This is the area I currently operate in. Through meticulous excavation or concise alteration I edit or dissect communicative objects or systems such as books, maps, tapes and other media. The medium’s role transforms. Its content is recontextualized and new meanings or interpretations emerge.

In this work I begin with an existing book and seal its edges, creating an enclosed vessel full of unearthed potential. I cut into the surface of the book and dissect through it from the front. I work with knives, tweezers and surgical tools to carve one page at a time, exposing each layer while cutting around ideas and images of interest. Nothing inside the books is relocated or implanted, only removed. Images and ideas are revealed to expose alternate histories and memories. My work is a collaboration with the existing material and its past creators and the completed pieces expose new relationships of the book’s internal elements exactly where they have been since their original conception. 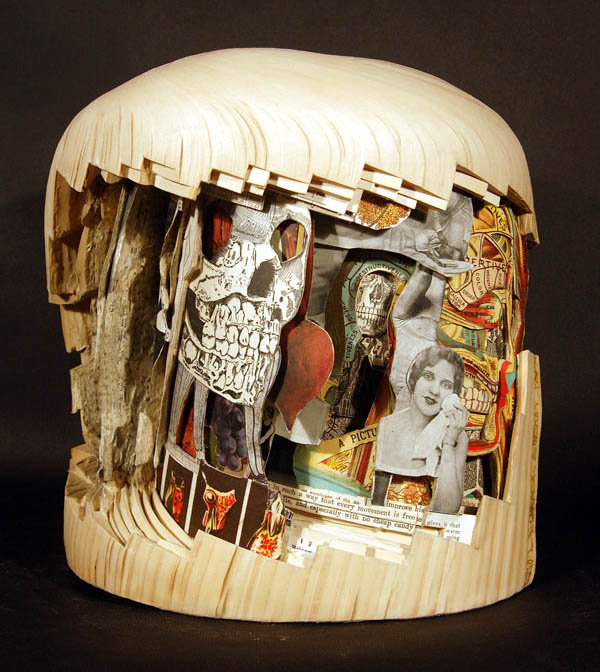 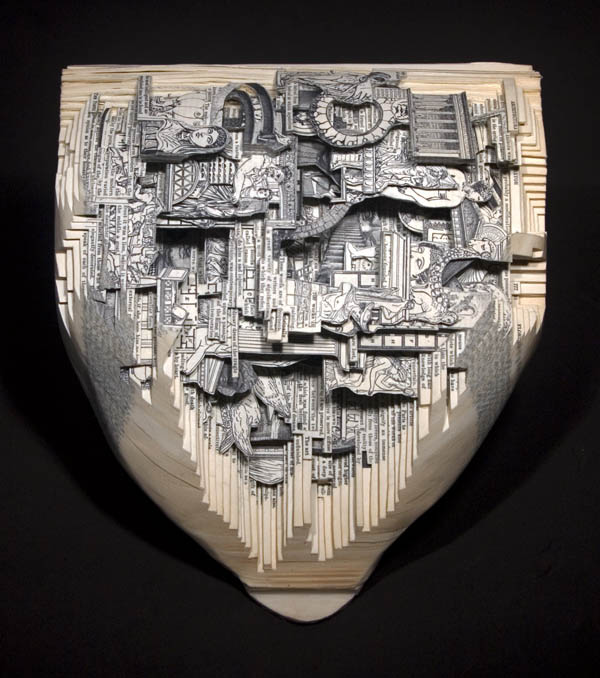 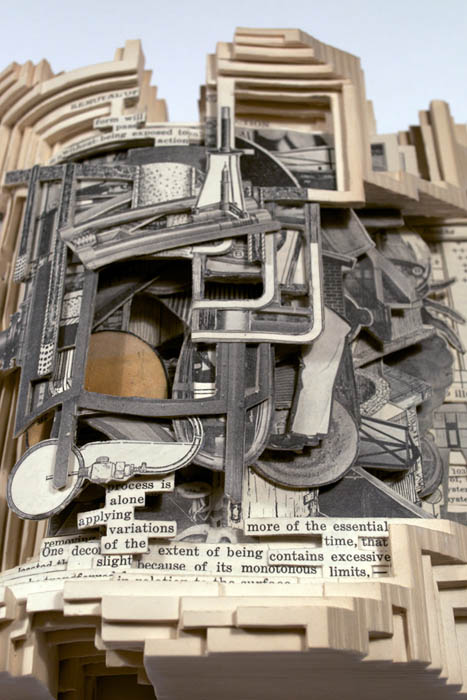 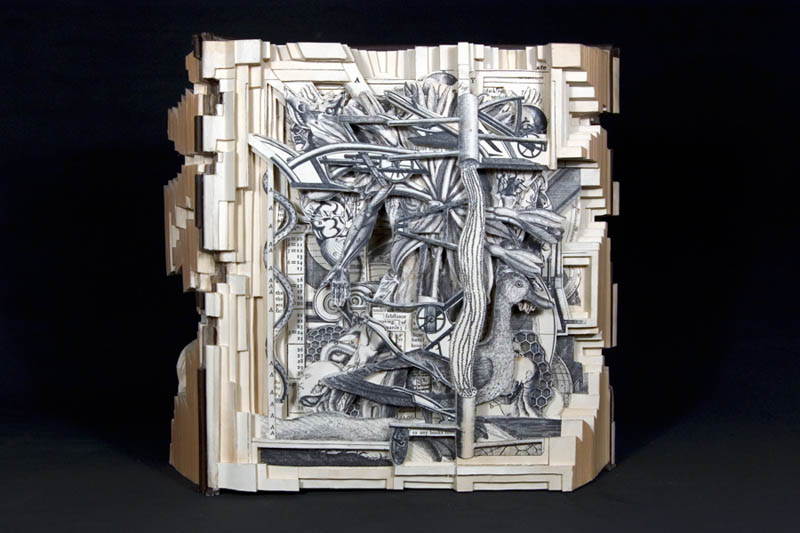 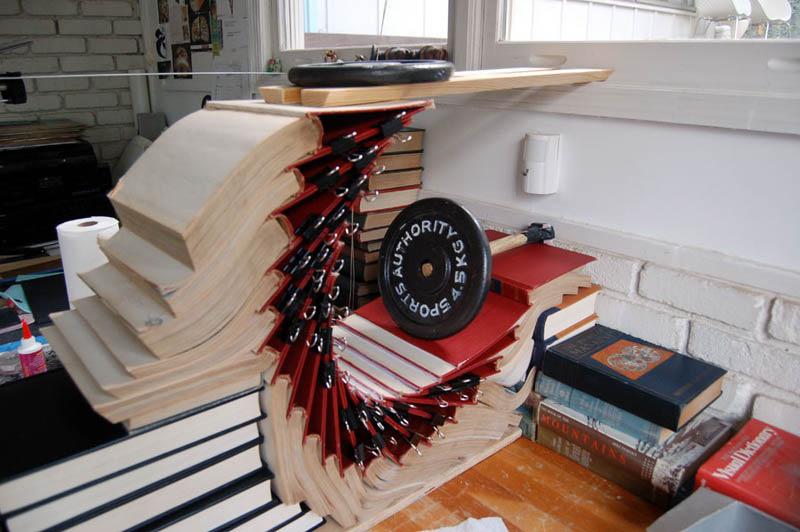 Dettmer is originally from Chicago, where he studied at Columbia College. He currently lives and works in Atlanta, GA.

Dettmer’s work has been exhibited and collected throughout the United States, Mexico and Europe. He has had solo shows in New York, Chicago, San Francisco, Miami, Atlanta and Barcelona and has had projects exhibited in Mexico City, Berlin and London. He has been represented at several international art fairs including Pulse (Miami), MACO (Mexico City), ARCO (Madrid), Scope (London, Miami), Art Chicago (Chicago) and many others.

He is currently represented by Kinz + Tillou Fine Art in New York, Packer Schopf in Chicago, MiTO Gallery in Barcelona, Toomey Tourell in San Francisco and Saltworks in Atlanta. Dettmer’s work has been exhibited Internationally in several museums, universities and art centers including the Museum of Art and Design (NY), Museum of Contemporary Art (GA), the International Museum of Surgical Science (IL), Museum Rijswijh (Netherlands), Wellcome Collection (England) the Bellevue Arts Museum (WA), The Kohler Arts Center (WI), and the Illinois State Museum (IL). His work can be found in several private and public collections throughout the U.S, Latin America, Europe and Asia. 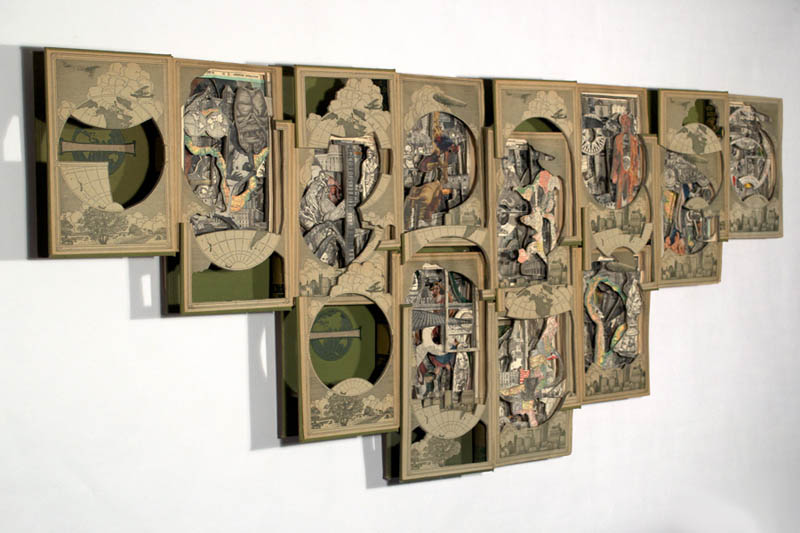 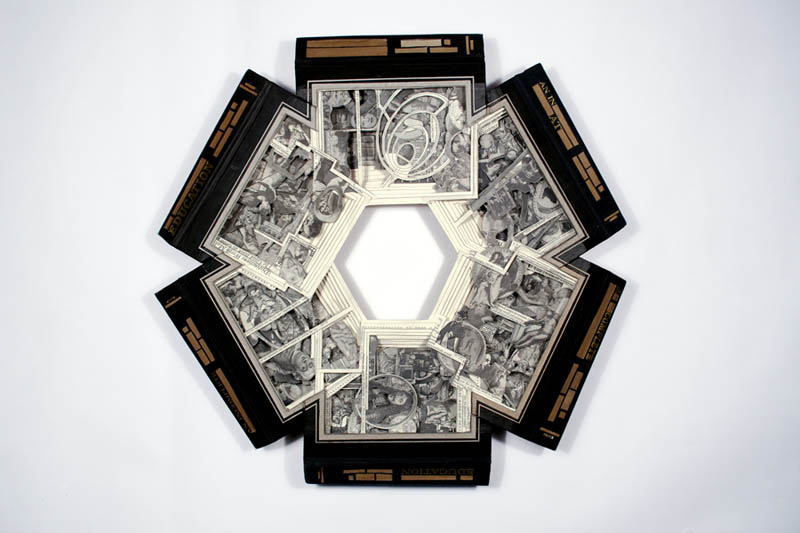 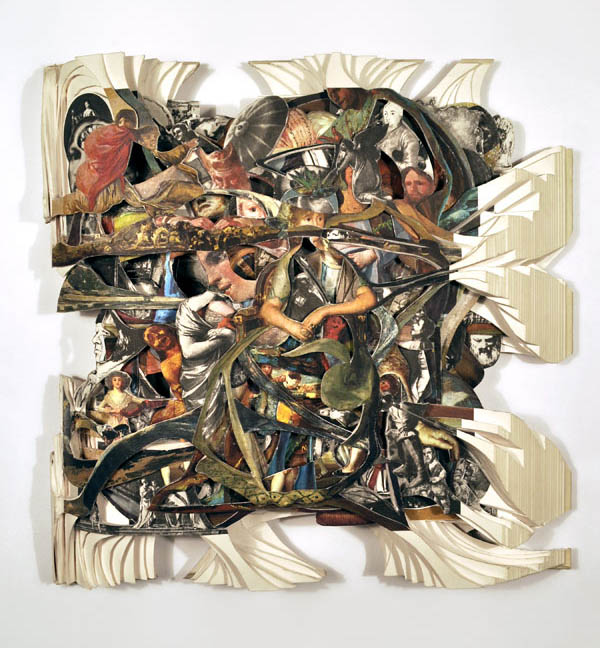 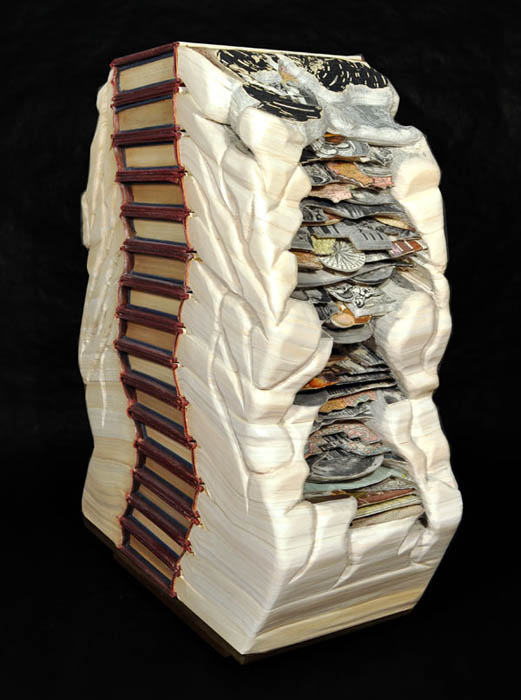 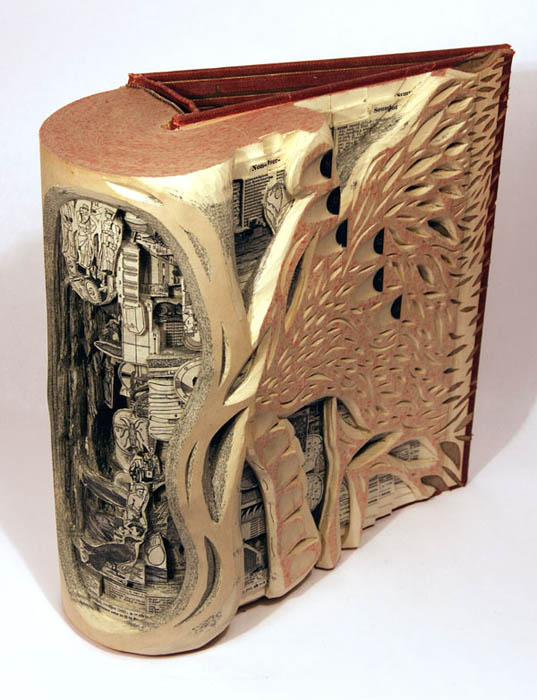 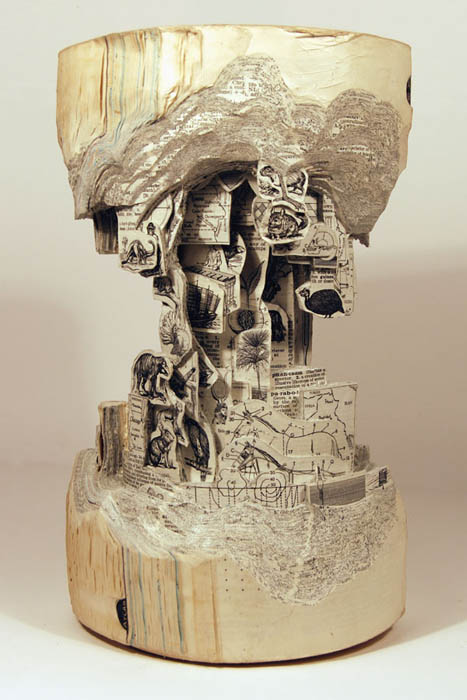