In the world of 3D sidewalk chalk art there’s Kurt Wenner, and everyone else. All have exceptional talent and tremendous vision but Kurt, the inventor and master, has such a higher degree of detail and intricacy in his pieces. Beyond his own work, Kurt has also devoted his life to arts education, teaching over 100,000 students during a ten year period.

Like so much outdoor street art, Kurt’s work is susceptible to the elements of nature and society. While many of his pieces may have faded or completely disappeared, their legacy will continue through photographs and memories of those who witnessed a master at work. Littered throughout the images are Kurt’s thoughts and notable achievements, enjoy!

– Born in Ann Arbor, Michigan, Kurt Wenner produced his first commissioned mural at the age of sixteen. By seventeen he was earning a living as a graphic artist
– He attended both the Rhode Island School of Design and Art Center College of Design
– He was later employed by NASA as an illustrator to create conceptual paintings of future space projects and extraterrestrial landscapes
– In 1982, he left NASA, sold all of his belongings, and moved to Italy to study classic Renaissance art

“My interest in Renaissance classicism started with the simple desire to draw well. I was struck by the vast difference between how students and teachers drew in the 20th Century and the way artists drew 500 years ago. It seemed to me that artists of the past had abilities far beyond those of today.

My curiosity about this discrepancy took me to Rome in order to seek out and master drawing and painting within the “language” of western classicism. During this time I isolated myself from 20th century art in order to explore the ideals and concepts practiced in earlier centuries. It has since become an ongoing mission to rediscover classical traditions and communicate them to a contemporary audience.”

In 1984, Wenner invented an art form all his own that has come to be known as anamorphic or illusionistic street painting. The form of perspective known as anamorphism was used by the great European Masters to give the illusion of soaring architecture and floating figures in ceiling frescoes. Wenner adjusted this geometry to create compositions that seemed to rise from and fall into the ground.

In anamorphic perspective, painted forms appear as three-dimensional when viewed from one point in space. Wenner created a special pictorial geometry that corrected the specific distortion caused by viewing his large images at an oblique angle

“My paintings invite rediscovery of many artistic traditions, as I borrow from mythology, allegory, literature, and theater. And even if viewers cannot reference the story it tells, they sense that one exists, thus stimulating their curiosity. I enjoy teasing my audience with a wealth of allusions — historical, stylistic, and perceptual.

From the beginning of my career, my main artistic motivation was to rediscover, transform and share neglected ideas from the past. I have been fortunate to be able to share my work with millions of people. I
hope that my work will eventually inspire other artists to learn more about the vast and rich patrimony of European Art, so that others can enjoy the wealth of ideas that is often hidden with the passage of time.” 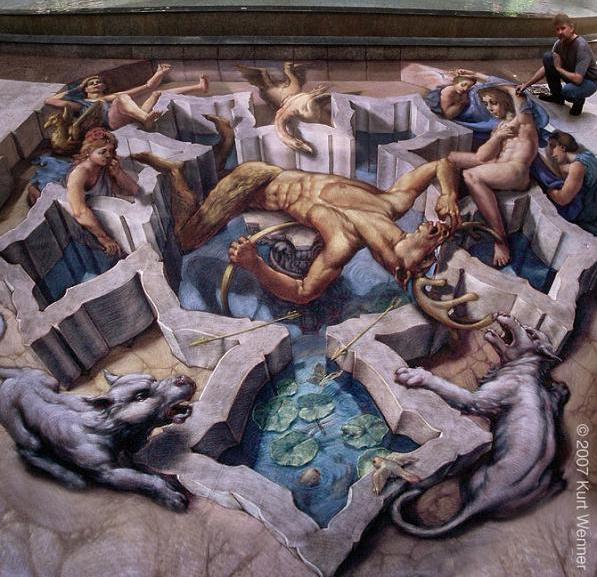 – Eventually, Wenner’s knowledge of Renaissance classicism provided a foundation for his own art, as well as material for numerous lectures and workshops given throughout the U.S.
– A firm believer in arts education, Wenner taught more than a hundred thousand children over a 10-year
period, and received the Kennedy Center Medallion in recognition of his outstanding contribution to arts education
– He has lectured at corporate events and conducted seminars and workshops for organizations ranging from the National Gallery of Art and the Smithsonian Institution to Disney Studios, Warner Bros. Studios, Toyota, and General Motors 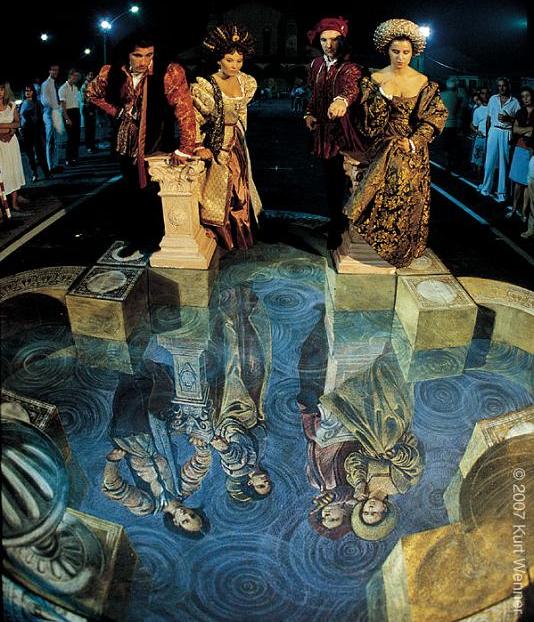 The Kennedy Center honored Wenner by presenting a one-man show of his work in the Center’s first ever exhibit of a visual artist. He was awarded The Kennedy Center Medallion in recognition for his outstanding contribution to arts education, and was the Center’s featured artist at the 15th Annual Imagination Celebration Festival.

Wenner was commissioned to create a print ad for Absolut Vodka as part of its famous artist ad series, joining the ranks of well-known artists such as Andy Warhol and Keith Haring. Absolut also sponsored Wenner in Dublin, Ireland.

As part of the official schedule of events to celebrate Pope John Paul II’s arrival, Wenner was commissioned to create an original composition based on the Last Judgment. The Pope signed Wenner’s mural, officially recognizing street painting as an official form of Sacred Art. 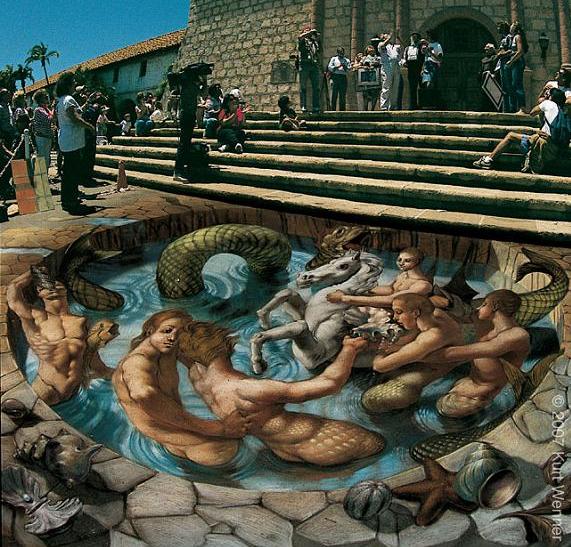 >ALL IMAGES AND INFORMATION FROM KURTWENNER.COM

Please visit his site if you are interested in additional information on his architecture, fine art, commissioned works, biography, movies, workshops and storefront.

If you enjoyed this, the Sifter highly recommends: 3D Insanity with Only Four Letters