Yesterday evening (August 4, 2020) at 6pm local time, multiple explosions occurred in Beirut, Lebanon, the nation’s capital. The devastating blasts occurred at the Port of Beirut. The main explosion was linked to approximately 2,750 tonnes of ammonium nitrate that had been confiscated by the government from an abandoned ship and stored in the port without proper safety measures for the previous six years.

The impact of the tragedy is still unfolding but so far there have been over 100 casualties with many people still missing and thousands of people being treated for injuries. Some 300,000 people have been displaced from their homes, but amid the devastation, stories of heroism are also emerging.

While power remains out in much of the city, the citizens of Beirut are coalescing, doing what they can to help their fellow residents. If you want to help, donations can be made to the Lebanese Red Cross.

Like so many major current events, scenes from Beirut unfolded and spread online in real time, as people with cameras and phones captured the devastating blasts from across the city, experiencing the event in different ways.

Below is a compilation of videos we’ve collected from various sources.

Another video is the explosion in #Beirut a few minutes ago. Praying for the safety of everyone. #Lebanon pic.twitter.com/MvRtUQpghs

Terrifying video from a guy driving his car while filming the Beirut explosion…pic.twitter.com/0XpfqCw22L

Footage of the Explosion in #Beirut #Lebanon a few minutes ago. Praying for the safety of everyone. pic.twitter.com/6Q3y6A6DxL

This is a video that I received from another angle – the person who shot it is OK.

Remember; many people usually jog/walk on the Beirut waterfront (close to the explosion).

Many people thought they just were documenting a big fire in the sea port. #Lebanon #beirutblast pic.twitter.com/CpuUgKAvLV

During a wedding photoshoot

Multiple angles of the explosion synced

During a BBC interview 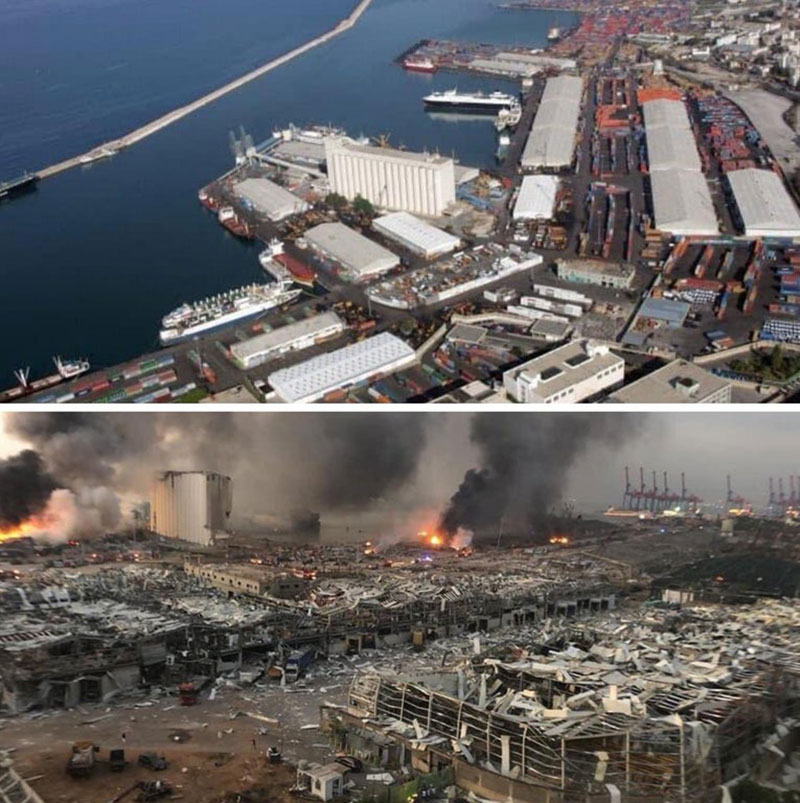 Video of elderly Lebanese woman at her home playing the piano while surrounded by broken glass and rubble, captures the spirit or #Beirut.

This city doesn’t give up and keeps rising from the ashes: pic.twitter.com/FUp1fuTGQK