34-year-old Sanna Marin of Finland became the world’s youngest Prime Minster this week. The former transportation minister was elected as prime minister by members of her left-wing Social Democratic Party after the resignation of Prime Minister Antii Rinne.

Marin will lead a coalition government made up of five parties, all of them led by women. Four of those women are under 35: Katri Kulmuni, 32, of the Centre Party; Maria Ohisalo, 34, of the Green Party; Li Andersson, 32, of the Left Alliance; and Anna-Maja Henriksson, 55, of the Swedish People’s Party.

The age of the new leaders may actually be more significant than their gender, at least in Finland, since the country has long had strong female representation in government. Finland elected its first female president (the country’s head of state, separate from the prime minister), Tarja Halonen, in 2000. The first female prime minister, Anneli Jäätteenmäki, followed in 2003. Earlier this year, women won a record 93 seats in Finland’s 200-seat parliament, reaching 47 percent of that body. The previous record, 85 seats, had been set in 2011.

Meanwhile, young people have been making gains in the Finnish parliament in recent years, with 48 percent of seats after the 2019 election held by people under 45. Eight members were under 30. Around the world, Marin will be the youngest sitting prime minister — other young leaders include Prime Minister Oleksiy Honcharuk of Ukraine, 35, and Prime Minister Jacinda Ardern of New Zealand, who is 39. [source] 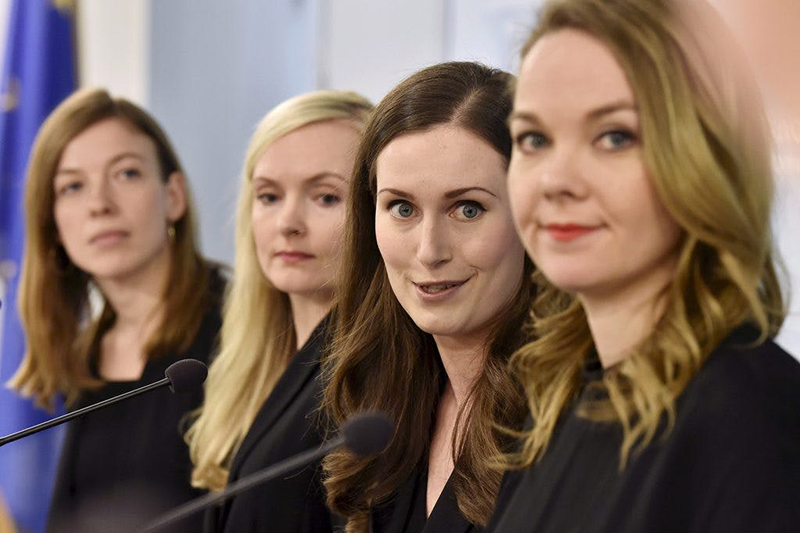 “I have not actually ever thought about my age or my gender, I think of the reasons I got into politics and those things for which we have won the trust of the electorate,” Marin said.

Marin has risen very quickly through the political ranks since she became head of Tampere City Council at the age of 27, and she is currently into her second term as a member of parliament. She already has some experience in the top job as she led the party during the previous incumbent Antti Rinne’s sick leave last winter. [source]

Finland was the first country in Europe to grant women the vote in 1906. Former Finnish prime minister Alexander Stubb (2014-2015), a conservative, also drew attention to the all-female leadership on Twitter this week.

My party is not in government, but I rejoice that the leaders of the five parties in government are female. Shows that #Finland is a modern and progressive country. The majority of my government was also female. One day gender will not matter in government. Meanwhile pioneers. 👍 pic.twitter.com/dW8OMEOiqb