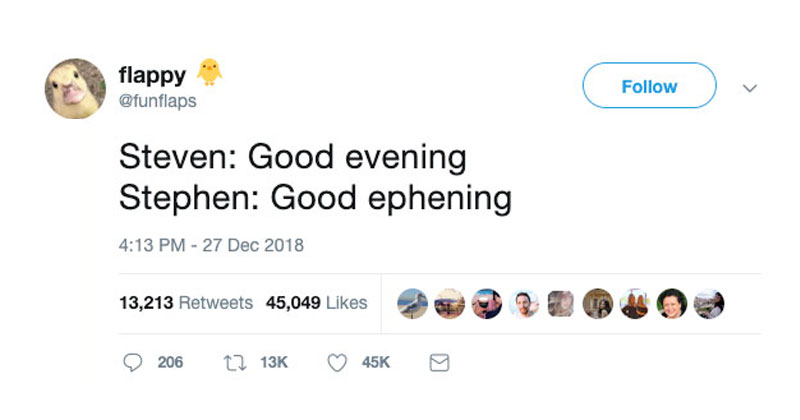 Welcome to the Shirk Report where you will find 20 funny images, 10 interesting articles and 5 entertaining videos from the last 7 days of sifting. Most images found on Reddit; articles from Digg, Kottke, Facebook, Twitter, and email; videos come from everywhere. Any suggestions? Send a note to [email protected]

– Friday!
– Morning coffee
– Me overcooking for the two guests we’re having over tonight
– Hi Phteven
– Now that you mention it
– It’s the ciiiiiiircle of life
– The polite lane changer
– The solo frisbee-er
– The three-person jump rope
– The disappointed father
– Burn!
– Every. Single. Time.
– I still think it’s a dog
– Stabilized
– Life finds a way
– “I hope no one saw that”
– A good reminder
– A great reminder
– Dewey
– Until next week

– Yankees, White Sox to play at Field of Dreams
– Attempting to Bake Bread Like the Ancient Egyptians Did
– Who Has the Most Fake Followers?
– The forbidden images of the Chinese internet
– He went to jail as a fake doctor. Now he’s a real one: The saga of Adam Litwin, MD
– Hackers Can Break Into an iPhone Just by Sending a Text
– Disney bought Marvel for $4 billion in 2009, a decade later it’s made more than $18 billion at the global box office
– Greta Thunberg, teen climate activist, sailing from Europe to U.S.
– Every Noise at Once
– How Social Media Shapes Our Identity