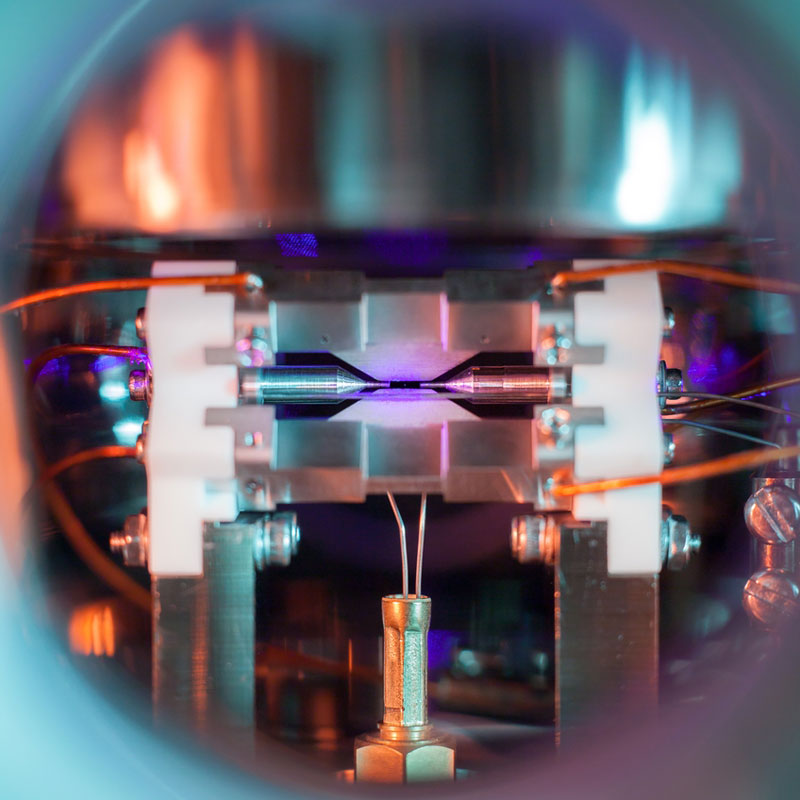 [12 February 2018] An image of a single positively-charged strontium atom, held near motionless by electric fields, has won the overall prize in a national science photography competition, organised by the Engineering and Physical Sciences Research Council (EPSRC).

‘Single Atom in an Ion Trap’, by David Nadlinger, from the University of Oxford, shows the atom held by the fields emanating from the metal electrodes surrounding it. The distance between the small needle tips is about two millimetres.

When illuminated by a laser of the right blue-violet colour the atom absorbs and re-emits light particles sufficiently quickly for an ordinary camera to capture it in a long exposure photograph. The winning picture was taken through a window of the ultra-high vacuum chamber that houses the ion trap.

Laser-cooled atomic ions provide a pristine platform for exploring and harnessing the unique properties of quantum physics. They can serve as extremely accurate clocks and sensors or, as explored by the UK Networked Quantum Information Technologies Hub, as building blocks for future quantum computers, which could tackle problems that stymie even today’s largest supercomputers.

The image, came first in the Equipment & Facilities category, as well as winning overall against many other stunning pictures, featuring research in action, in the EPSRCs competition – now in its fifth year.

David Nadlinger, explained how the photograph came about: “The idea of being able to see a single atom with the naked eye had struck me as a wonderfully direct and visceral bridge between the miniscule quantum world and our macroscopic reality. A back-of-the-envelope calculation showed the numbers to be on my side, and when I set off to the lab with camera and tripods one quiet Sunday afternoon, I was rewarded with this particular picture of a small, pale blue dot.”